Boxing analyst Max Kellerman once said: "If you walk down a street and see a man putting a golf ball on one corner, two guys shooting hoops on another corner, a couple of guys playing stickball on a third corner and two guys in a fistfight on the fourth corner, where do you expect to see the crowd?"

Kellerman has used and adapted the anecdote many times, and it’s been repurposed and edited for Facebook posts and memes hundreds more, but the jist always remains the same: A good fight is still more appealing to most people than almost any other form of sporting entertainment, regardless of who the competitors are.

Much of being a fan of boxing on the internet is simply complaining or arguing about fights that aren’t happening. In the midst of that, it’s easy to forget that every weekend, somewhere in the world, there’s a damn good fight happening—someone just has to show it, and you have to watch it.

Saturday night’s DAZN offering from Tijuana was a perfect example of the magic boxing can provide at the sub-elite level. The card featured intriguing prospects, heartwrenching backstories and wild brawls that are all far more interesting than typing in caps about whether one heavyweight is ducking another heavyweight.

The main event, between aging warriors Humberto Soto and Brandon Rios, was one of the most entertaining fights aired this year, and it didn’t have any world title implications at all. Though Rios told reporters prior to the bout that he’d hoped a win over Soto would catapult him into a title shot in his third bout of a three-fight DAZN deal, the reality to objective observers was that even if somehow he were maneuvered into a position for a title shot, the stacked elite welterweight masthead would all be too much for him. In the case of Soto, he was two years removed from deciding he would walk away from the sport after a farewell bout in Tijuana—resigned to the fact that title contention at his age and weight was likely out of the question. 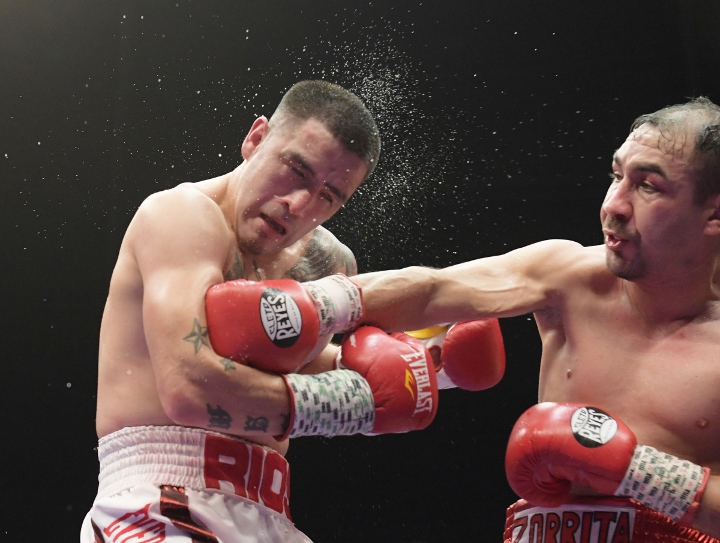 But this fight showed that just because fighters don’t project to win a world title, doesn’t mean they need to be tossed in the scrap heap. Rather, Rios and Soto were like the aging rock band, not writing No. 1 singles anymore, but still able to play the hits and put on a hell of a show. It’s easy to forget that the Ring Magazine Fights of the Year between 2001 and 2003 all contained Micky Ward, Arturo Gatti and Emanuel Augustus—three fighters at the time not factoring in to world title conversations. Not to mention, the iconic Friday night series from the 40s to the 60s was mostly populated fighters who “made for good TV,” whether they were world title holders or contenders or not.

Had you dismissed the fight and turned your TV to say, the competing PBC card on FS1, you would have missed the kind of war Rios has been involved in his entire career. But more than that, you would have missed an inspirational performance from a 38-year old natural lightweight, fending off a man 16 or more pounds above his ideal fighting weight, in front of an adoring hometown crowd.

Soto displayed remarkable toughness, standing in the pocket and taking shots from a much larger, sledgehammer puncher like Rios, and also the guile and savvy that earned him the nickname “The Crafty Little Fox.” As much as he fought Rios’ brand a trench warfare, he did it using handspeed and a thought-out strategy to own the final 10-15 seconds of each and every round.

It was in many ways a celebration of the oft-overlooked 22-year career of Soto, one which he is well within his rights to continue. Now in his second decade as a pro, the Tijuana native is the epitome of a working man’s fighter—quite literally balancing a boxing career at times with owning and sometimes driving buses and cabs, but also in the figurative sense, fighting 80 times over six weight classes. To carry the aging rock band analogy over, this was like a Grammy’s tribute for Soto—if you didn’t pay attention to everything he’s done before, this was the perfect entry point to go back and appreciate it.

Beyond the action in the main event, the card in Tijuana brought forth some of the remarkable stories that the sport is flush with. There was lightweight Ivan Delgado, who spent seven years away from boxing while in the California penitentiary system, who came back to boxing thanks to a chance encounter with his old coach Hector Saldivar the day he walked out of jail at the age of 22. Then, there was Kevin Villanueva, with one of the most tragic backstories in all of boxing. As a child, Villanueva’s father was kidnapped, supposedly by a Mexican gang. Kevin fell into depression and drug addiction at a young age, ultimately getting expelled from school in tenth grade. He turned to boxing full-time, both to keep his life on track and to potentially find his father with the means and notoriety he could fetch with a ring career.