Sunday morning, 9am. It’s six days before the big fight and James “Buddy” McGirt is making the media rounds with ace publicist Rachel Charles. It’s around this time that we start to wonder what’s going through a fighter’s mind as the opening bell creeps closer.

McGirt, a former junior welterweight and welterweight champion who recently earned his place in the International Boxing Hall of Fame, knows those feelings all too well. In fact, he’s feeling some of them already as he waits to see his fighter, Sergey Kovalev, take on Saul “Canelo” Alvarez this Saturday in Las Vegas.

“You still get the butterflies,” McGirt said. “I fight the fight in my mind at least 20 times a day.”

So how’s it looking?

“So far we're up on the scorecards.”

McGirt laughs. It’s good to hear it after a tumultuous year for the Long Island native that saw him hit the highest of highs in June when he got his plaque in Canastota and the lowest of lows in July when his fighter, Maxim Dadashev, died less than a week after the trainer pulled him out of a bout against Subriel Matias.

It was the best and worst of this sport all over the course of a month, and a reminder of the glory and the danger that comes with every trip to the ring. As a veteran of 80 professional fights as a participant and countless others as a trainer, no one knows this better than McGirt, who may have found out that the best thing for him to do after the death of Dadashev was to get back to work. And so far, it’s working for the 55-year-old, who is embracing the challenge ahead of him this weekend.

And unlike many, he expected to ultimately see Alvarez across from his charge this weekend despite the fact that the Mexican star was last in the ring defending his middleweight titles against Daniel Jacobs in May.

“It doesn't surprise me because I believe that he's the type of young man that loves a challenge,” said McGirt of Canelo. “He went up to '68 (to fight Rocky Fielding), he won that fight very easily and I guess he figured what the hell's seven more pounds? If I was in his shoes, I probably would have done the same thing.”

But Kovalev is a true light heavyweight and he’s not Rocky Fielding.

“I believe in my heart that they feel that Sergey is washed up,” said McGirt. “I believe that they think, as a fighter, he's done. But I tell him (Kovalev) sometimes the old man can pull a rabbit out the hat still. And that's our goal this week.” 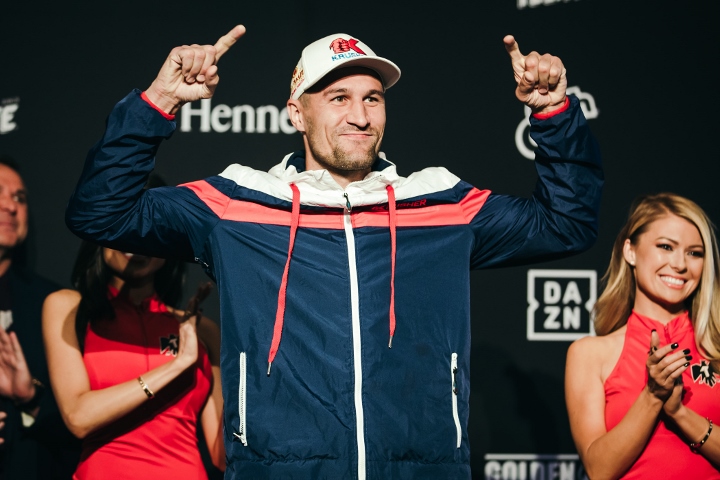 It’s a realistic goal, but also a far-fetched one as well. The 36-year-old Kovalev is 2-0 with McGirt, beating Eleider Alvarez and Anthony Yarde, but he was also knocked out by Alvarez six months before winning the rematch, and he was in trouble against Yarde as well. Add in that Alvarez has always been a big fighter who should carry the weight well, and there’s no surprise that Kovalev is considered the underdog, a reality fighter and trainer don’t put too much thought into.

“We don't talk about the fight or the underdog stuff,” said McGirt. “We talk about certain things we know we've gotta do in the fight, but as far as being the underdog and the other stuff, we don't talk about it. And I've been the underdog before, so I really don't pay that any mind because these are people who are giving their opinions and they're entitled to that. We just gotta go in there and take care of business.”

Taking care of business is what Kovalev and McGirt have been doing since the announcement that they would be working together, and such a project has been a specialty of the 2002 BWAA Trainer of the Year winner, who did his part to bring the likes of Arturo Gatti, Antonio Tarver and Paulie Malignaggi to big wins when they needed them most. But Kovalev and McGirt? It seems like the odd couple. Even McGirt can’t explain why the two clicked.

“I really can't answer that because I really don't know,” he said. “Sometimes certain things are meant to be at certain times in your life. You meet certain people and they walk into your life for a reason. So I would say it was timing and something that was meant to be. It's a matter of the individual and a lot has to do with communication, respect for each other and stuff like that.”

It doesn’t hurt that McGirt has seen and done it all in and out of the ring in the boxing business, and while that didn’t exactly cement the union with Kovalev and former trainer John David Jackson, it seems to be working in this case.

“That helps,” said McGirt. “And I've got a great sense of humor. (Laughs) Sometimes they look at me like I'm crazy, but sometimes you've got to find something to break the ice. And then I also don't act like I know everything. If a fighter has a suggestion, I'm like, 'All right, let's try it.' I'm not the trainer that says, 'No, you don't know what you're talking about.' Some fighters may have a different way of seeing something that we don't, so we have to value their opinion.”

Going into this fight, Kovalev’s opinion may be that if he beats Alvarez, he shocks the world and stamps his own ticket to the Hall of Fame. McGirt doesn’t disagree.

“His whole attitude towards this fight is totally different,” he said. “He knows that this right here could be like the icing on the cake for him, something to show the world after the ups and downs of the last couple years of his career.”

So what about Buddy McGirt? Would a win be the icing on the cake for him, too?