A good steak left smothered in the right combination of red wine and spices cane be delicious if cooked at the right time.

This Saturday, on an independent pay-per-view show, former titlists Juan Manuel Lopez and Yuriorkis Gamboa may be just a single fight away from a showdown.

Make that a single fight and just shy of a decade.

Once upon a time, Lopez-Gamboa looked like the best fight possible in the featherweight division. They were young, talented, undefeated, and just flawed enough to make a showdown mouth watering. Their shared promoter at the time, Bob Arum, was quoted around the horn to the effect that he wanted to build the fight into a big money showdown.

We all know what happened.

Boxing is a funny thing. Once two names are linked together, it’s really never too late to put them in a ring together. Sometimes, what appears too late can be right on time, as was the case in Evander Holyfield-Mike Tyson. Given both Lopez and Gamboa are past their prime by years, and can still make some money against each other if they both win this weekend, it’s better than nothing.

It’s just not what it could have been.

We say that a lot about boxing in the 21stcentury.

Don’t worry. This isn’t a screed claiming boxing doesn’t make the fights it should or that the best don’t fight the best. That’s not true now nor has it ever been. It’s fair to point at particular fights and say ‘those two aren’t fighting each other.’ 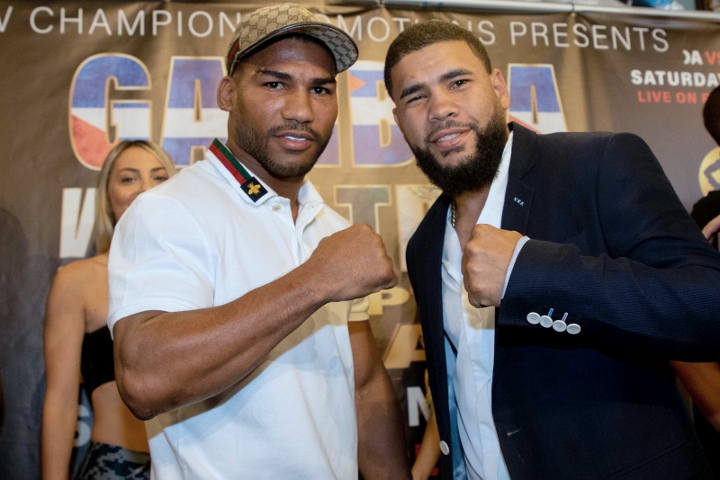 That isn’t an indictment of the sport. Those who try to belabor that point are often either pouting and overstating the case, or don’t really follow boxing enough to know what they’re talking about. So far this century, we’ve seen the Barrera-Morales trilogy, the Pacquiao-Marquez quadrology, Hopkins-Trinidad, Wladimir Klitschko against a string of number one contenders and, just this year, the top four cruiserweights in the world whittled down to Oleksandr Usyk.

The best fight the best all the time.

In the case of Gamboa-Lopez, their then-shared promoter said it was the latter.

Marinating fights can make sense on a reasonable timetable. After Ray Leonard won the rematch with Roberto Duran, the extra seasoning put on the showdown with Thomas Hearns made everyone a fortune. That seasoning took about a year. Lopez and Gamboa were both titlists at or around featherweight for close to two years, with multiple defenses apiece when Salido upset Lopez.

Neither man ever achieved super stardom.

Maybe neither ever would have. In retrospect, could one or the other have reached a higher plateau if they’d been matched when they should have been? Could a classic have led to a rematch?

We’ll never know, just like we’ll never know about a Riddick Bowe-Lennox Lewis professional clash that never happened, a Roy Jones-Bernard Hopkins rematch when both men were perceived as equals, or a Floyd Mayweather-Manny Pacquiao blast when both were in their primes.

Lopez-Gamboa isn’t a miss in that category but it was still a miss and a clash in 2019 is small consolation.

To be sure, there were fights in every era that didn’t get made or were made past their best sell-by date. The problem for boxing is that with each new generation fighters seem to fight a little less. It’s uncommon for a top shelf fighter to get in the ring more than twice a year right now. Anthony Joshua, Deontay Wilder, Errol Spence, Terence Crawford will all end the year at two appearances.

This leaves less room for marinade (and no, it’s not coincidence that those were the names selected). Every fight averages to basically half a year of a career. 20s turn to 30s in half a dozen contests where once twice that many fights might have been.

It doesn’t just impact the timetable to make fights. It constricts the ability of fighters to prove themselves truly great. Without multiple fights against quality foes in or near their prime, how can a fighter truly be great? They can look the part but the proof will always be lacking.

Lopez and Gamboa, time has shown since, were probably never going to be great ones whether they fought or not. Had they clashed though, the winner would be remembered differently than either will be now when they are finally done.

The price of their marinade was a footnote instead of an exclamation point.