Caleb Plant took a significant step Saturday night toward the biggest fight of his career.

By beating Truax, Plant positioned himself for a lucrative, high-stakes showdown with boxing’s cash cow, Canelo Alvarez, later this year. If Mexico’s Alvarez defeats WBC mandatory challenger Avni Yildirim on February 27 in Miami and WBO champ Billy Joe Saunders in May, Plant and Alvarez are likely to meet in a full super middleweight title unification fight, perhaps as soon as September.

A fight versus Alvarez obviously would be much more difficult than his easy victory over the 37-year-old Truax.

The 28-year-old Plant (21-0, 12 KOs), who entered the ring as at least a 50-1 favorite according to most Internet sports books, consistently caught Truax with his jab, bloodied Truax’s nose early in their fight and cruised to a wide win on all three scorecards.

Judges Max De Luca, Lou Moret and Zachary Young all scored the fight a shutout for Plant, 120-108. Plant wanted a knockout, but he said he hurt his left hand in “the fourth, fifth round” of their 12-rounder.

When Androl asked if his hand is broken, Plant replied, “I think so.” Plant reiterated, however, that he wants to fight Alvarez later this year to prove that he is the best super middleweight in boxing.

Truax (31-5-2, 19 KOs, 1 NC), of St. Michael, Minnesota, pulled off a huge upset the last time he was the challenger in an IBF super middleweight title fight. His bout with Plant didn’t at all resemble the night he defeated England’s James DeGale by unanimous decision in December 2017 in London.

Unlike DeGale, Plant clearly took Truax seriously and refused to allow Truax to knock him off course for a fight against Alvarez. According to CompuBox, Plant landed 132 more punches than Truax (179-of-581 to 47-of-389). 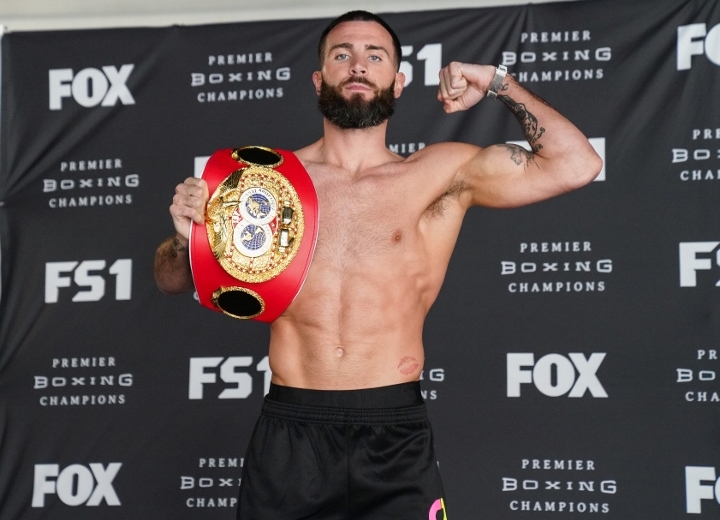 Plant fought for the first time in nearly a year. Prior to Saturday night, Plant hadn’t boxed since he defeated Germany’s Vincent Feigenbutz (32-3, 28 KOs), also a mandatory challenger, last February 15 at Bridgestone Arena in Nashville.

He hadn’t fought since settling for a 10-round, majority-decision defeat of Kenya’s David Basajjamivule (16-5-1, 11 KOs) last January 25 in Minneapolis. Basajjamivule was 41 when Truax beat him and ended a 2½-year layoff.

Plant was way ahead entering the 12th round Saturday night, but he was aggressive throughout that final round and landed various power punches on a battered Truax.

The challenger continued exhibiting toughness and kept trying. He just couldn’t do anything with a much better boxer.

Another stinging jab by Plant snapped back Truax’s head with just under a minute to go in the 11th round. By then, it was beyond obvious that Truax needed a knockout to win.

Truax caught Plant with a right hand as Plant backed into the ropes with 20 seconds to go in the ninth round.

Truax nailed Plant with perhaps his flushest punch of the fight, a right hand 17 seconds into the eighth round, as Plant was backed against the ropes. Plant took that shot well, but Truax caught him with another right while they stood in the center of the ring at the halfway point of that eighth round.

Plant let his hands go as they approached the end of the eighth round, but Truax snuck in another right hand.

Plant knocked Truax into the ropes with a jab about 1:15 into the seventh round. Hard jabs by Plant continued to befuddle Truax later in the one-sided seventh round.

Truax tried to get inside on Plant, but Plant tied him up whenever Truax closed the distance in the sixth round. Plant also made Truax pay with his jab numerous times in that round.

Plant spent the fifth round landing jabs and avoiding Truax’s punches. Truax continued to bleed from his nose in that round and couldn’t cut off the ring against an athletic opponent.

Plant’s jab was a weapon again in the fourth, when the champion bloodied Truax’s nose. Truax snuck in a right uppercut just before the fourth round ended.

Plant connected with an overhand right early in the third round. Truax tried to come forward for the rest of the third round, though he often ran into Plant’s jab.

Plant’s jab snapped back Truax’s head about 30 seconds into the second round. A left hook by Plant knocked Truax off balance toward the end of a one-sided second round.

Plant landed a left hook about 1:05 into the fight that got Truax’s attention. Plant landed multiple jabs to Truax’s body later in the first round.