Throughout the week, BoxingScene has provided readers their choices for the annual boxing Oscars (or Emmys, or Golden Globes, or Nickelodeon Kids or whatever trophies one most anticipates).

The top honors, for Fighter (Teofimo Lopez) and Fight (Jose Zepeda-Ivan Baranchyk), were well deserved and the latter may be in the running for Fight of the Decade. While it wasn’t for a title, a war like that between two consensus top ten fighters in their division doesn’t come along every day.

Along with Knockout, Upset, and Prospect of the Year, much of the best of the wild year that was 2020 has been covered.

Much, but not all.

To close out 2020 awards season here, let’s present some additional selections the year would not be complete without mentioning.

Round of the Year: Jose Zepeda-Ivan Baranchyk Round Five

Fights might be viewed as a whole but they are in part a series of fights between two combatants over a predetermined limit. Each block of three minutes, whether the contest is set for six, eight, ten, or twelve rounds, is its own drama but built off the foundation of the drama preceding it. It’s why a fight like Sergio Martinez-Julio Cesar Chavez Jr. can remain fondly remembered. Eleven rounds of tedium? Sure. But, oh, that twelfth and final round…

The 2020 Fight of the Year could likely fill multiple slots in round of the year voting but the choice here is the fifth and final of a scheduled ten. There were more frenzied frames but after trading six official, and what really should have been seven, knockdowns through the first four rounds, we got a hell of a finish. Baranchyk, dropped and hurt late in the fourth, responded and was firing back again as both men met each other with caution and the pursuit of an opening. In the final minute, Baranchyk exploded with a shot to drive Zepeda into the ropes for the seventh knockdown, the referee noting the ropes had kept Zepeda up. Barachyk came forward for the finish and was met with a left hand that folded him into the floor for the last time. It was a fitting, concussive finish to a classic. 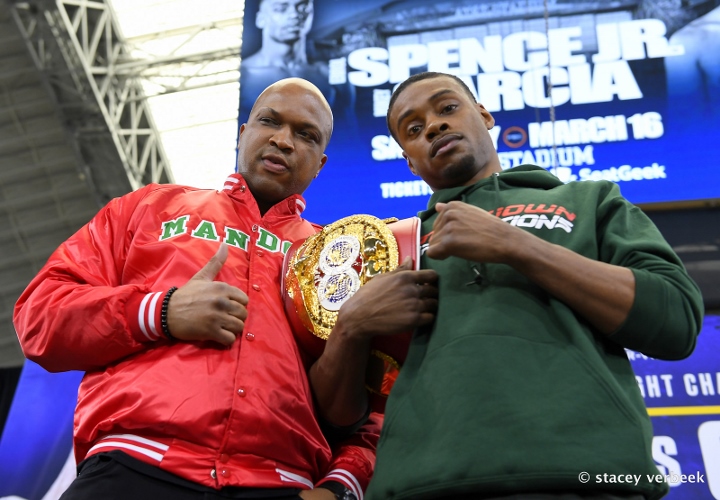 Trainer of the Year: Derrick James

The fighter is ultimately responsible for what happens in the ring. We can never underestimate the minds at work in preparing them. To have a couple of unified titlists under the same wing would be impressive no matter what divisions it came in. To have them in arguably two of the deepest and most talented classes in boxing is another matter.

Derrick James can make that claim with big wins in 2020 from both Jermell Charlo and Errol Spence, under very different circumstances. With the former, James guided Charlo in October to the top of the mountain in a still ongoing, multi-year round robin at Jr. middleweight. In a fight still competitive on the cards, Charlo landed a whale of a body shot to add Jeison Roasrio’s WBA and IBF belts to the WBC crown Charlo already has on his shelf.

In December, James cornered the return of already unified WBC/IBF welterweight titlist Errol Spence. Spence, just a year prior, was involved in what could easily have been a fatal car crash. James had him sharp and back to form in a decision win over game, tested former lineal Jr. welterweight king Danny Garcia.

Good fighters would likely be gems under the tutelage of many but great trainers can be the difference between good and great. As Spence and Charlo have continued to evolve and deepen their resumes, the common denominator stands out in a year when both posted elite victories. Derrick James is the Trainer of the Year.

Event of the Year: COVID

Nothing defined 2020 more, in boxing and in the world at large, like the global COVID-19 pandemic. It shut down chunks of the engine of the world and sent sports to the sidelines. In boxing, it meant innovation. The ESPN bubble series and Eddie Hearn’s back yard were among the new locations fight fans got used to. Blurred out fan backgrounds added an odd aesthetic for Fox shows. Positive tests meant having to be flexible to change cards on the fly.

All of it resulted in action getting back in the ring with as much safety as possible. By year’s end it also meant fans in big arenas spaced out in ways that returned ambience but never let us forget the era we were watching in. Sometime in 2021, vaccines will mean fuller crowds and richer events. In 2020, boxing fought back against the times and still found a way to deliver a knockout fall schedule. We’re unlikely to see another year like it.

Let’s damn sure hope so.

Network of the Year: ESPN

This was a tough call between ESPN and Showtime. Showtime beat everyone to the punch in announcing a deep fall slate that created instant anticipation. ESPN countered by making the best fight possible at lightweight, Teofimo Lopez-Vasyl Lomachenko, to stellar ratings relative to the sweet science. They also delivered the Fight of the Year, the US return of Naoya Inoue through their Plus service, Joe Joyce-Daniel Dubois, and Joe Smith-Eleider Alvarez. As the year is the sum of all its parts, ESPN being half of the biggest money fight of the year (Fury-Wilder II) and the bubble gem that was Joshua Franco’s upset of Andrew Moloney also factor in their favor.

Most of the major networks and streaming services delivered some serious quality this year, before and after COVID. ESPN by a hair may have had the most consistent of any. Kudos though to every network that put their best foot forward and made the most of 2020.

Comeback of the Year: Errol Spence

We all make mistakes in life. Some can be fatal, for ourselves or others. Getting behind the wheel under the influence is a mistake that can add up to both. Errol Spence made a mistake and when news came about his auto accident in 2019, followed by footage of the wreck, it was easy to worry first about whether he would survive and then whether he would return to the ring. In a best case scenario, the answer to both questions was yes. The most people can often do is learn and be better after their bad days. Spence, without a tune-up, came back to face a serious contender and looked nearly as good as he did before the accident, some brief breather rounds late being the only notable dip in the return.

No one could know until Spence was back in the ring just what he would look like and how his body might respond to the body trauma effects of his accident when hit. The world found out as Spence resumed his position as the leader at welterweight. It was the most dramatic comeback story of 2020.

Best wishes and health to everyone who takes a moment to read us here at BoxingScene for the rest of 2021.