Knockout punches are the ultimate eraser. They can erase errors made in the ring. They can make up for up to eleven rounds lost in the course of the fight. And they can wipe out any amount of criticism from the general public in one concussive instant.

Deontay Wilder didn’t have the greatest week in the public eye leading up to Saturday’s bout against Dominic Breazeale. There was the ongoing annoyance over him not facing fellow heavyweight titleholder Anthony Joshua immediately. Then, there were his comments to a throng of gathered reporters about his lurid desire to kill an opponent in the ring, and wanting that opponent to be Breazeale, for whom he would pay for a funeral.

These cast Wilder in extreme shades of negative light no fighter wants to find themselves standing in: As both a fighter not willing to take the toughest available challenge, and also as one criminally disrespectful of the sport. Said viewpoints failed to take a variety of factors and context into consideration, but even for those holding them, Wilder’s sudden, violent one-punch knockout of Breazeale washed them away completely.

Those who were furious that Wilder wasn’t in the ring with Joshua on this night and scoffed at the perceived mismatch booked in its place were likely still thrilled to watch the knockout live, and likely a few more times on their social media timelines as well. Some of those who maligned Wilder for discussing killing an opponent were the same to share footage of him landing a shot so hard that it could have done just that.

To be clear, there is a significant difference between violence and death, and the desire for violence and the intention of death, both morally and legally speaking. Wilder’s remarks, then, were callous and irresponsible. However, it is an artificial and somewhat fluid line we draw in terms of both fighters’ behavior and their relationship with violence, as well as our own concern for fighter safety. In reality, we root for fighters to be rendered unconscious, and simply cross our fingers that it isn’t fatal every time their heads bounce off the canvas and their eyes gloss over. 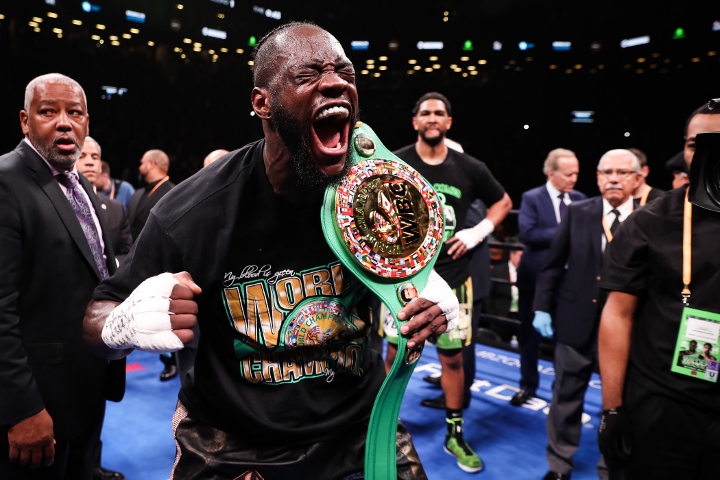 The grand irony is that all it took for public outrage towards Wilder, and the corresponding compassion for boxers’ livelihood to vanish was a brutal knockout to push it off our timelines. The television broadcast, in good taste, addressed Wilder’s comments indirectly by describing them as “controversial,” and lumping them in with general “bad blood” between fighters. Once the fight was over, Wilder apologized for his remarks, told Breazeale he loved him and that his comments were simply a means of fight promotion. Very little correspondence following the bout viewed Wilder’s pre-fight comments as contextually relevant to the result that unfolded.

When Wilder speaks of the desire to kill a man, we’re willing to make two allowances: We either don’t believe that he means it, or we believe that he means it, but we don’t think that he is going to follow through with it. Because if we accepted him at his word, one couldn’t ethically or legally allow him to enter the ring. Part of our discomfort with him saying what he said is that it forces us to confront the grave possibilities of this sport we enjoy. He comes perilously close to making us all accomplices in something we didn’t necessarily sign up for. But once he comes perilously close to doing so by knocking someone out in a satisfying way, we are not angry anymore.

The theatrical and performative side of fight build-ups is something we are all aware of and take part in. In the midst of them, mortality is often addressed in a variety of ways that don’t seem to discomfort the public. Fighters talk of “destroying” their opponents, or even “ending their careers.” One could take the leap to determine this means the fighter is intending to render his opponent physically incapacitated for the rest of time, which could logically mean the shortening of their life at best, and ending it at worst. However, most just characterize this as a laudable and understandable level of viciousness when entering a prizefight. Fighters also often speak of their willingness to “die in the ring,” which is met with approval and praise for showing bravery. Nobody takes this to mean “tune in tomorrow night, someone might die, and I’m okay with it being me!”

We don’t believe that fighters have a killer mentality heading into a fight—or that they are wholly unafraid of death--but we also don’t know for certain. But as long as mortality is either not addressed, or at least addressed in the abstract, we are able to maintain the illusion and veneer of the Gentleman’s Sport.

Wilder’s comments likely don’t speak to an actual murderous desire in his heart. But the reaction to them illustrates our core struggles with the harsh realities of boxing. Hearing explicitly that a man wants to kill another man in the ring offends our conception of how things ought to be—that this is just a sport, and just entertainment.

Our discomfort speaks to a darker, deeper part of our nature that we hope and believe is not motivating this industry. The reality is that in the name of entertainment, the industry walks all the way up to the line, and in turn we walk right alongside it.

The question now is what will we do with the information we’ve found in confronting this discomfort? Will we move away from treating boxing like a bloodsport? If we don’t want fighters discussing wanting to kill one another, because we know death to be a real--if undesired--possibility, will we then as observers stop questioning the courage of those who lace up the gloves and don’t perform with the ferocity we think we deserve?

All it ever takes is a knockout.