LAS VEGAS - Cinco de Mayo Weekend just got more caliente as Golden Boy Promotions has turned up the heat for a packed weekend of boxing to kick off the highly anticipated showdown between Canelo Alvarez (46-1-1, 32 KOs)and Amir "King" Khan (31-3, 19 KOs) on Saturday, May 7 at the new T-Mobile Arena. As a special treat for all Las Vegas boxing fans, Golden Boy Promotions will present a free night of outdoor boxing on Friday, May 6 at the Toshiba Plaza adjacent to the state-of-the-art T-Mobile Arena. Located on the Las Vegas Strip between New York-New York and Monte Carlo, fans will get to see Canelo and Khan face off for the final time during their official weigh-in on the Toshiba Plaza immediately followed by a night of action-packed fights starting at 4:00 p.m. PT. Photos by Hoganphotos. 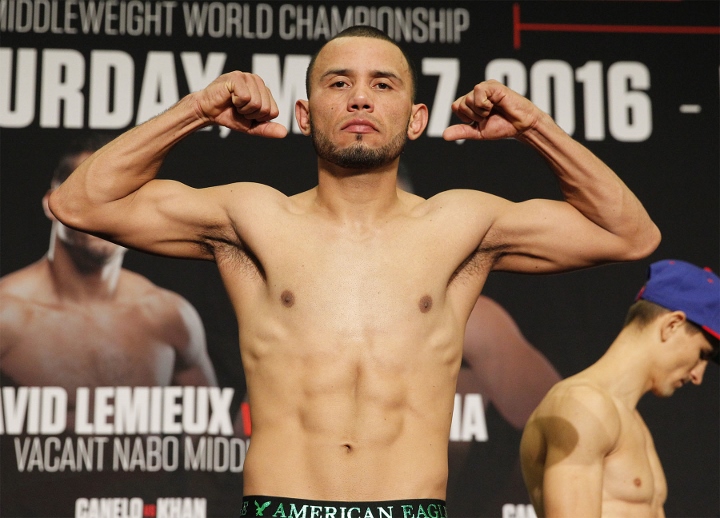 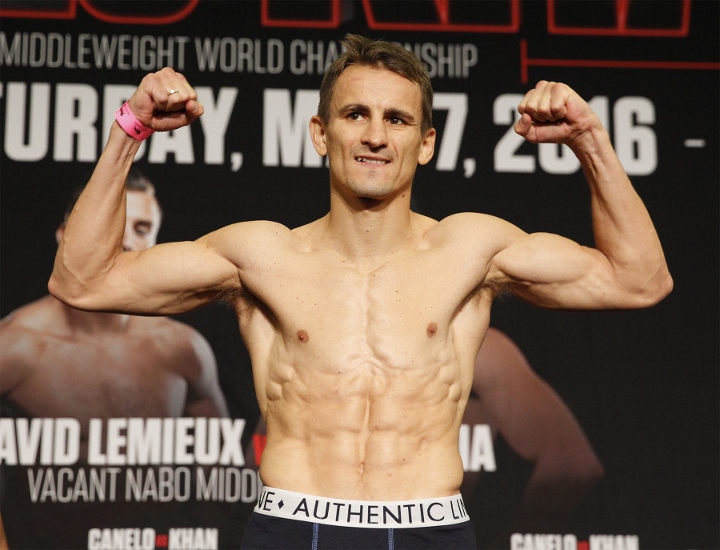 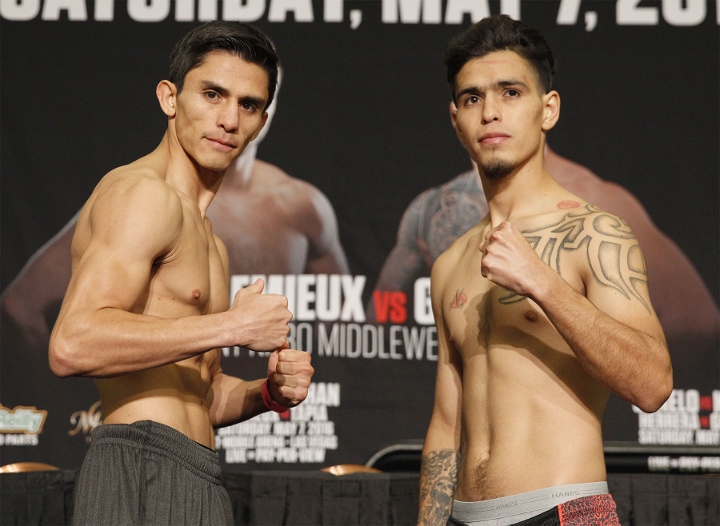 "Golden Boy Promotions is giving back to all the boxing fans in Las Vegas and kicking off Cinco de Mayo weekend on May 6 with an action-packed night of free boxing to get everyone warmed up for Canelo vs. Khan," said Oscar De La Hoya, Chairman and CEO of Golden Boy Promotions. "Golden Boy is committed to bring the best in boxing and the fights featured on May 6 are guaranteed non-stop action between fighters in their prime battling for titles that will get them closer to becoming the next world champions." 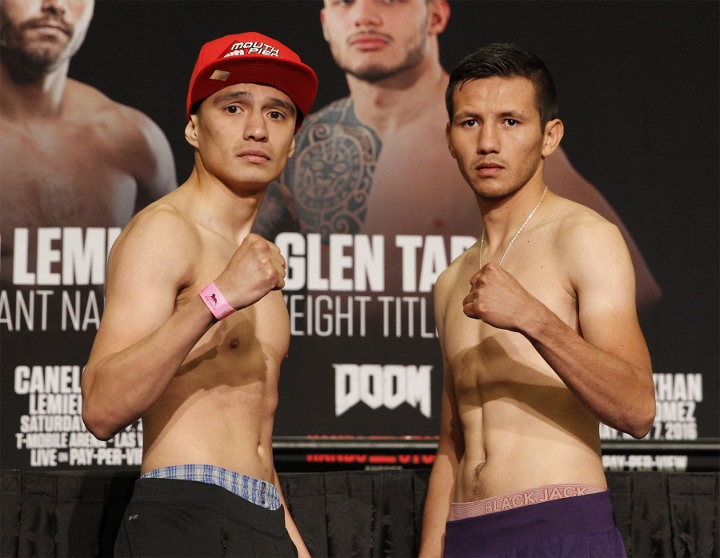 "We are excited to have Petr Petrov fighting on this great weekend of boxing," said Arthur R. Pelullo, President and CEO of Banner Promotio`ns. "Petr is on the cusp of fighting for a world title and winning this fight will gain him the NABF title, which will be added to his NABA title and will solidify him as one of the best lightweight's in the world." 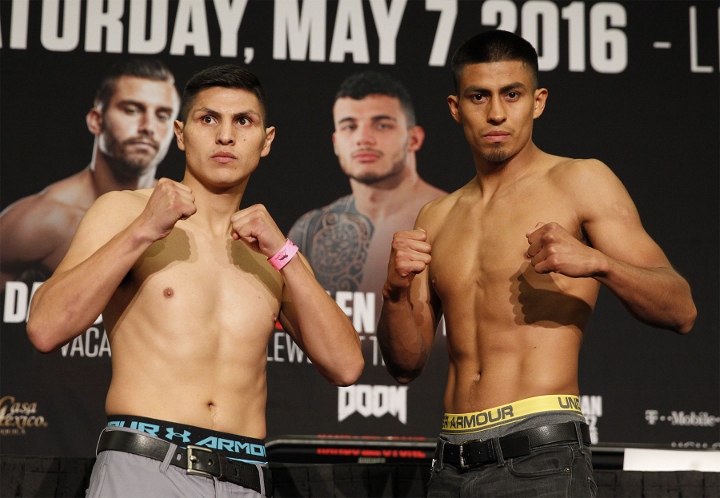 Part of the non-televised card but still streaming live on Ring TV, Oscar "Ratón" Cortes (25-2, 13 KOs) of Zapopan, Mexico will participate in an eight-round lightweight clash and fan favorite Joet Gonzalez (12-0, 6 KOs) of Glendora, CA will go up against Chihuahua, Mexico's Ricardo "Cepillo" Proano (11-3, 9 KOs) in a six-round featherweight bout. Leaving behind a highly decorated amateur career, Santa Ana, Calif.'s Alexis Rocha (1-0) has the entire boxing world buzzing as he fights professionally for the second time in a four-round super welterweight bout. Opponents will be announced shortly. 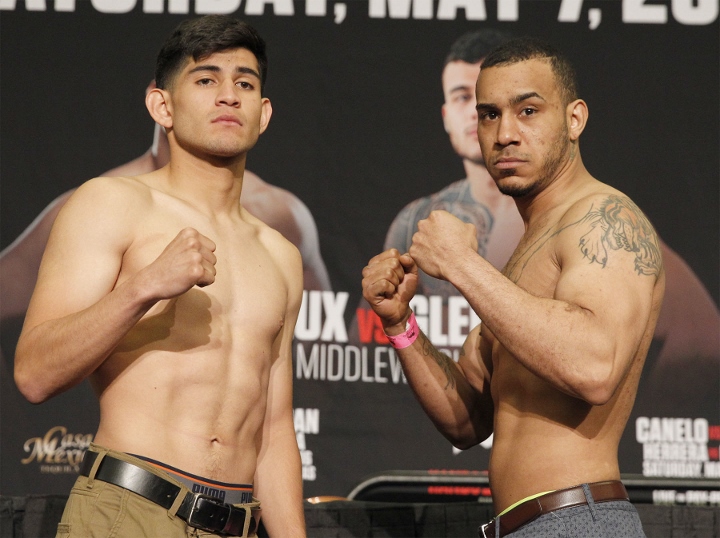 Marvin Quintero vs. Petr Petrov is a 10-round fight for the NABF and NABA Lightweight title and is presented by Golden Boy Promotions in association with Banner Promotions and sponsored by "Cerveza Tecate, Born Bold." The festivities begin immediately after the Canelo vs. Khan official weigh-in at the outdoor Toshiba Plaza in front of T-Mobile Arena with the first bout starting at 4:30 p.m. PT. The Estrella TV Boxeo Estelar broadcast will air live on Friday, May 6 at 9:00 p.m. ET/6:00 p.m. PT and will stream live simultaneously on estrellaTV.com and on YouTube via Fenomeno Studios: youtube.com/FenomenoStudios. The Ring TV live stream will begin at approximately 4:30 p.m. PT through 9:00 p.m. PT

Marvin "Cachorro" Quintero will make his return to the ring after his knockout over Jeffrey Fontanez in September 2015 at the Belasco Theater winning the NABF Lightweight Title. Throughout his long and notable boxing career, this experienced southpaw fighter has faced the likes of Walter Estrada and Miguel "Titere" Vasquez, the latter of whom he went up against for a shot at the IBF Lightweight World Championship. Quintero is fired up to fight Petr Petrov this May for his chance to add the NABA Lightweight Title to his collection.

With 36 victories under his belt, lightweight contender Petr "Zar" Petrov holds an impressive boxing resume including winner of ESPN's 2014 Boxcino tournament. Petrov was last seen in the ring on April 2015 taking on former world champion Gamaliel "Platano" Diaz winning the NABO and NABA Lightweight Titles via unanimous decision.  As the current NABA Lightweight Title holder, Petrov will be looking to add another notable title to his name when he faces Quintero on May 6.

Meanwhile, hailing from Fairfield, CA, Alan Sanchez has impressed boxing fanatics everywhere, especially in his defeat of John Karl Sosa on the weekend of the Cotto vs. Canelo this past November at Las Vegas Hard Rock Hotel and Casino last November. A former sparring partner for world champion Canelo Alvares and coming off a five win streak over Jorge "Pantera" Silva, Jorge "Zurdo" Ramirez Jr., Ed "The Lion" Paredes, and Carlos "Kalimba" Lozano, Sanchez is hoping to secure his first title when he takes on Pablo Cesar Cano for the vacant WBC Continental Americas Welterweight Title.

Last November, Guadalajara, Mexico's Horacio "Violento" Garcia brought every bit of his power and punch when he took down distinguished fighter Raul "Bule" Hidalgo at the Las Vegas Hard Rock Café as he fought during the weekend of Cotto vs. Canelo. As the current title holder for the WBC Continental Americas Super Bantamweight Title, "Violento" is ready to take on any opponent willing to step up in the ring to face him Cinco de Mayo weekend.

Oscar "Ratón" Cortes, the 27-year-old native of Zapopan, Mexico, will bring his experience to the ring on May 6, with victories over well-known fighters such as Alejandro "Zorrito" Barrera and Alexander Monterrosa. As the two-time champion for the WBC Youth Intercontinental Lightweight Title, Cortes is has all of the experience to make this eight-round lightweight bout an all-out brawl on May 6.

Always swift in the ring, Glendora, CA's Joet Gonzalez has so far taken on the likes of Marcos "No Money" Rios, Miguel "Yaqui" Tamayo, and Jose Angel "Pepe" Beranza in his hopeful boxing career. After his latest knockout last November at LA FIGHT CLUB, this undefeated fighter is using all of his power to maintain his undefeated status, opening up the Cinco de Mayo weekend festivities against Ricardo Proano of Chihuahua, Mexico on May 6.

Chihuahua, Mexico's own Ricardo "Cepillo" Proaño will be making his first appearance in Las Vegas on May 6. Having previously fought for the WBC FECOMBOX Super Featherweight Title in 2012, Proano will be looking to use that experience against the rising featherweight star Joet Gonzalez. A professional since 2011, he has taken on tough opposition in Edgar "Lic" Martinez, Cesar Alan Valenzula and Francisco "Panchito El Centenario" De Vaca. On May 6, Proano will look to start off 2016 in the winner's column.

Newly signed with Golden Boy Promotions, 20-year-old southpaw standout, Alexis Rocha of Santa Ana, CA will make his debut in the "Fighting Capital of The World" on May 6. As the brother of fellow Golden Boy Promotions stable mate and current WBC Silver Featherweight Champion Ronny Rios, Rocha brings an impressive amateur record that has helped develop him as a top talent in the ring.