Salido and Vargas exchanged heavy blows in the first round, with Salido getting the better of Vargas in a flurry of punches late in the round. Round four saw Vargas injured, with blood pouring from a cut on his eye obtained by a head butt. The war continued on and brought the crowd to their feet in round six, where Vargas held Salido against the ropes several times with a flurry of punches. The warriors didn't stop and kept the pressure on each other until round 12, which saw Vargas and Salido laying into one another relentlessly until the bell. 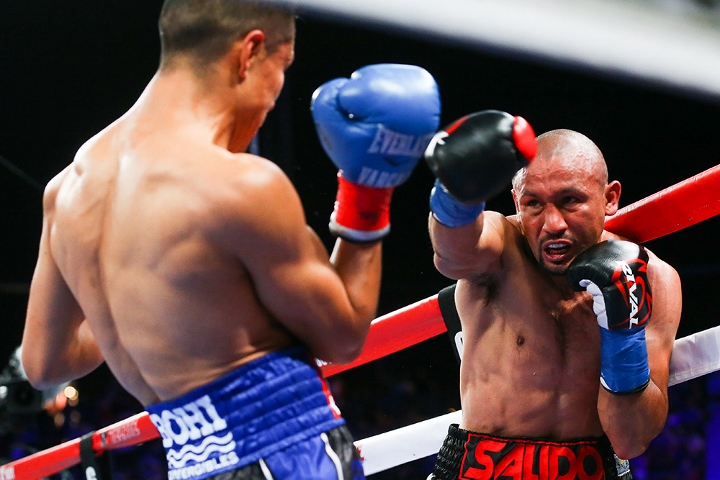 "I feel really good about this decision," said Vargas. "I knew coming in that I was going to be facing a very tough opponent; however I didn't expect for him to head butt me and give me so many cuts to the face. I used powerful jabs and countered with ruthlessness. Takashi Miura was a much more powerful puncher, but my respects to Salido. He is a very tough fighter and has a very strong chin. Overall, I'm happy I was able to face this skilled warrior." 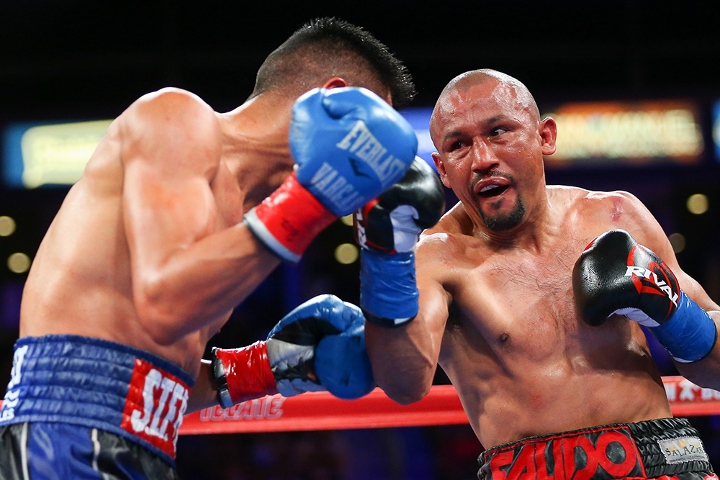 "It was a complicated fight like I expected, a very difficult fight from beginning to end with a lot of action," said Salido. "It was a great spectacle for all the fans. They got what they wanted; they wanted to see blood and they saw blood. I would welcome another fight with him. I believe that I won by a slight margin, but I would welcome a rematch. I would also accept the fight from Takashi Miura or from Lomachenko. I'll fight anyone." 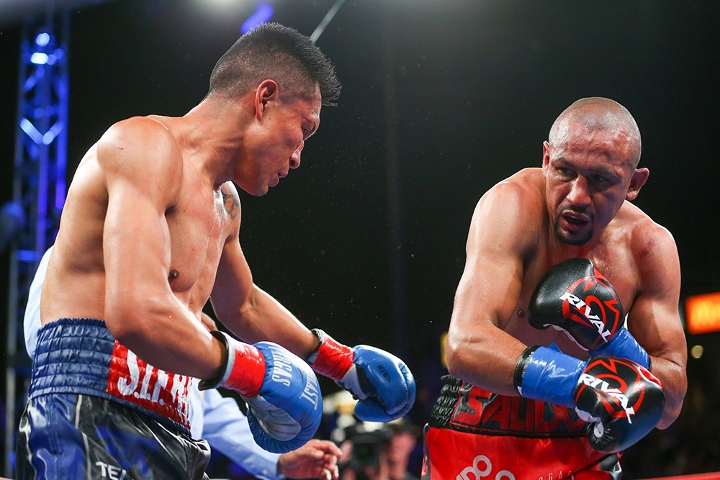 Before the man event began, attendees were encouraged to light up their cell phones across the audience and to chants from the crowd of "Ali." Ring announcer Michael Buffer told the assembled crowd the story of Ali and described his life as a boxer and activist, and his impact in the world beyond just sports. He followed with what has become standard for fallen boxers - ten bells rung to give the final count-out to the legend. 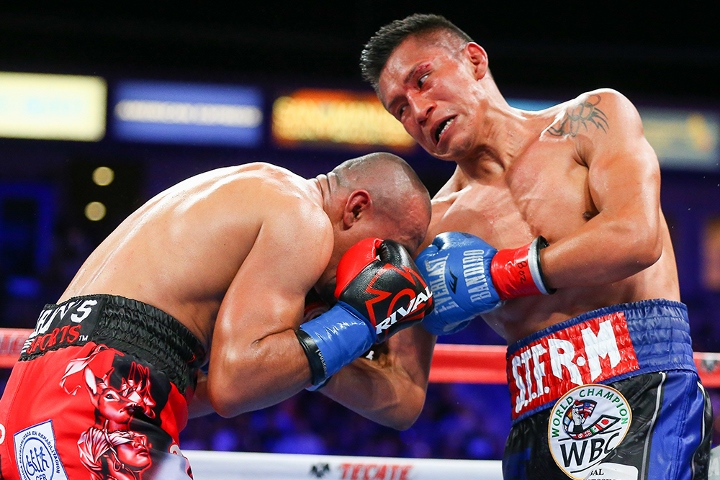 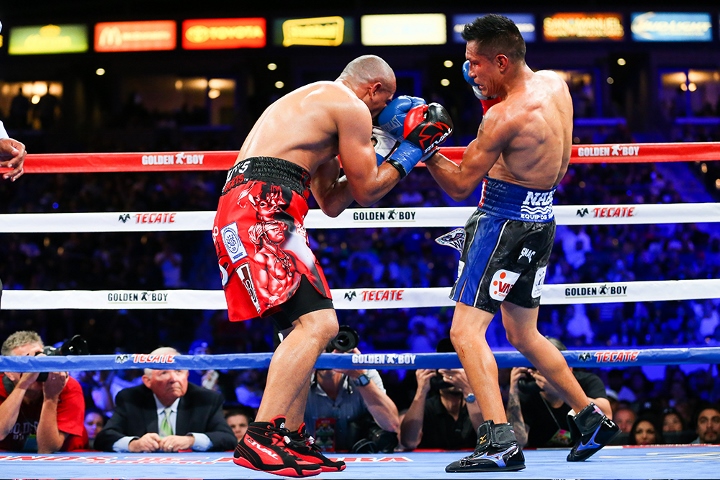 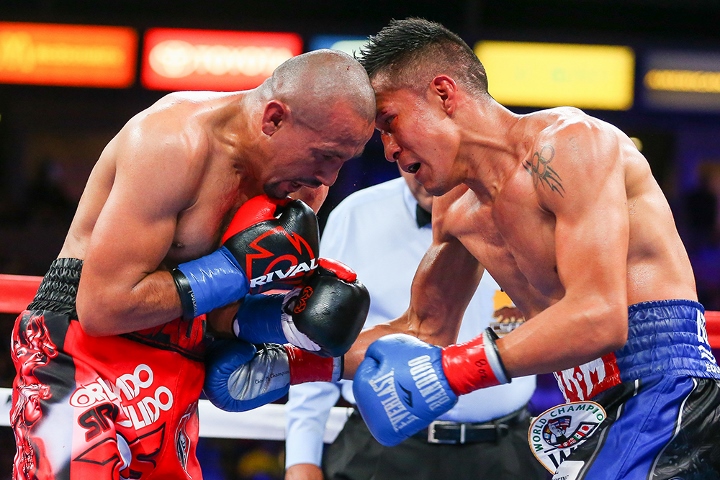 In the co-main event, Abraham "Chamaco" Lopez (21-0-1, 15 KOs) of La Puente, Calif. made his HBO debut and gave Julian "El Camaron" Ramirez (16-1, 8 KOs) of East Los Angeles his first professional loss to claim the vacant NABA Featherweight Title. Throughout the early rounds, Ramirez and Lopez traded massive blows that left the crowd in gasps and cheers. Mid-way through the fourth round, Ramirez managed to catch Lopez with a few solid shots across the jaw. Lopez kept trying to chip away at the guard of Ramirez, but had difficulty landing clean punches through the early rounds of the fight. That changed, though, when in the sixth round Lopez opened up a deep gash across the right brow of Ramirez. In a bit of payback, Ramirez's continual blows caused swelling over Lopez's right eye by the end of the seventh round. By the final bell, both fighters left whatever strength they had on the mat. In a unanimous decision, the judges awarded the victory - and the NABA belt - to Lopez. 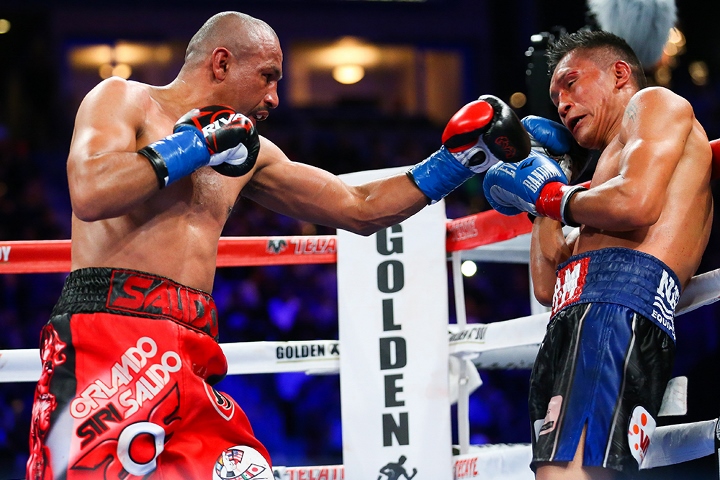 "It was a close fight, my respects for Julian he definitely is a hard puncher," said Lopez. "But I'm not hurt, I was able to counter the punches he came at me with. This victory opens doors for me; it moves me up to the next level in my career and gives me the opportunities to fight for a world title. I'm glad I listened to my corner, that's what ultimately helped get the victory tonight." 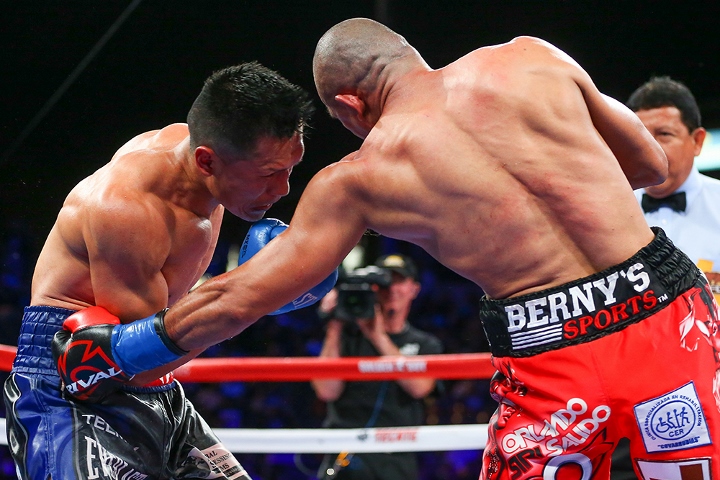 "This was a really tough fight," said Ramirez. "I knew he would be a tough opponent, and that's what I trained hard for. I know that he won some rounds, but I thought that I did very well out there. And I thought that I had a very good shot at winning this. I feel that the decision should have been much closer. But it is what it is, and that's boxing." 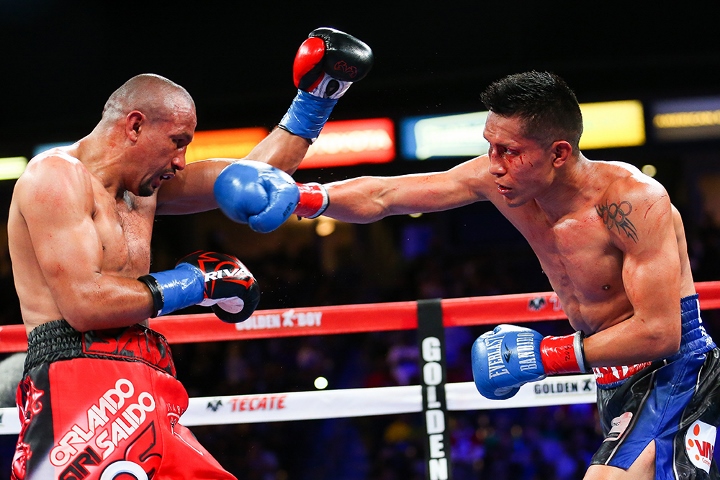 "King" Gabriel Rosado (23-9, 13 KOs) of Philadelphia and Tijuana's Antonio "Tony" Gutierrez (20-2-1, 9 KOs) faced off for a 10-round middleweight bout that turned into a narrow final decision. In the early rounds, Gutierrez focused on working Rosado's body with repeated left jabs and combos to his midsection. Rosado countered with a number of strong shots to Gutierrez's head over the top of his guard and uppercuts. Gutierrez caught Rosado late in the second round with a strong right cross that seemed to momentarily daze his opponent. In the fourth round, Gutierrez caught Rosado with a shot that toppled him to the mat before Rosado surged back with a number of strong punches. Over the next few rounds, both fighters periodically traded heavy blows in a game of back-and-forth for control of the fight. In scoring that indicated how close the fight was (95-94, 96-93, 95-94), Rosado emerged with the hard-earned unanimous decision. 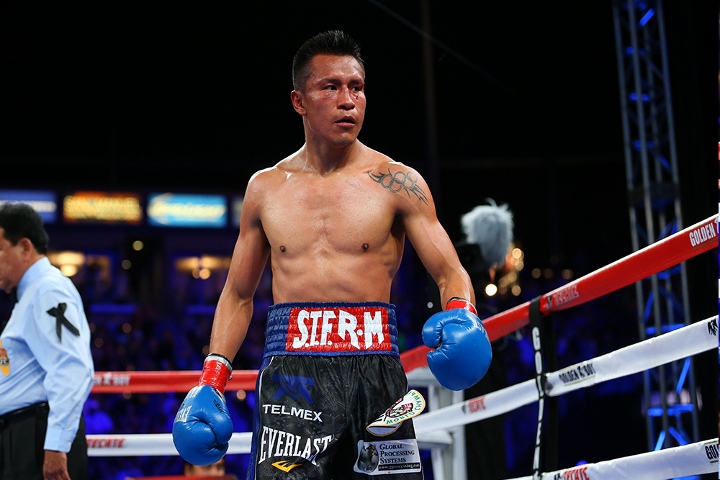 "I was hoping this fight would go a little differently," said Rosado. "I wasn't expecting to get knocked down. I know that I was making some mistakes in my rounds, and he was coming at me really hard. I know that I have a lot of support out here. This was a learning experience for me - despite my flaws, I was able to get back up and take this victory." 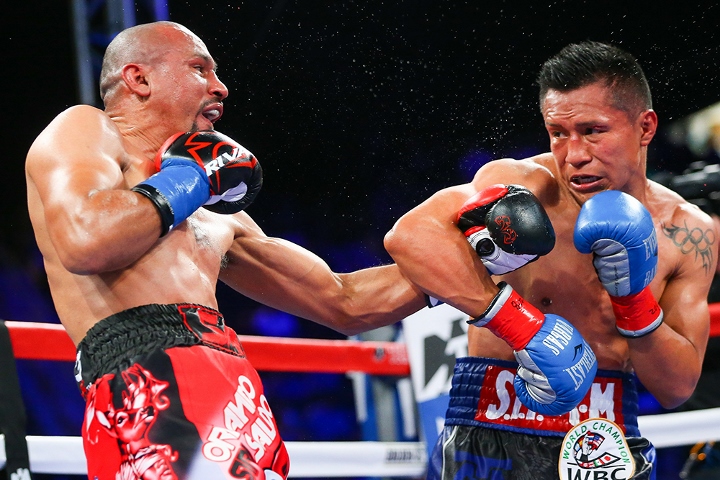 "I had studied Rosado before this fight, and knew he was a fighter with great ability and punching power," said Gutierrez. "This has been the most difficult fight of my career thus far, but I feel that I was very impressive and dominated many of the rounds tonight. When I dropped him in the fourth round, I was surprised because I was just doing what my corner advised. And it worked. I don't agree with the decision. I feel I gave the better fight tonight, and the crowd agrees with me." 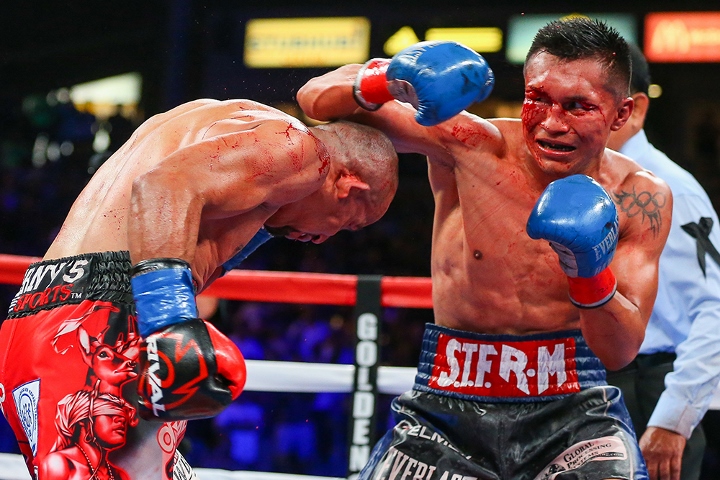 Christian "Chimpa" Gonzalez (14-0, 12 KOs) of Buena Park, Calif. squared off against Jhon Gemino (12-7-1, 5 KOs) of Batangas, Philippines an eight-round lightweight bout. Going the distance, Gonzalez won via unanimous decision and scored 80-72, 80-72, 79-73 across the three judges. Gonzalez repeatedly walked Gemino into the ropes, where he then let loose with a flurry of combinations and visibly draining his opponent. Gemino fought back gamely, landing a few solid punches to Gonzalez's head and upper body during the fourth round - though Gonzalez came back the next round with several solid uppercuts through Gemino's guard. Through the final rounds, Gemino played defensive, making several strong upper body blows to Gonzalez - while Gonzalez continued to dominate the center of the ring and control the tempo of the fight. 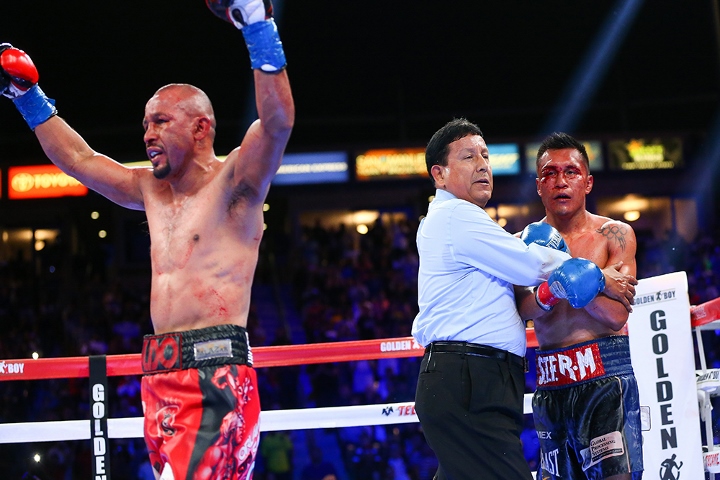 "My opponent was really tough and was able to take lots of punches which was challenging," said Gonzalez. "Every fight is a learning experience for me, and I am extremely happy I was able to get tonight's victory against this tough guy because this is what I came to accomplish." 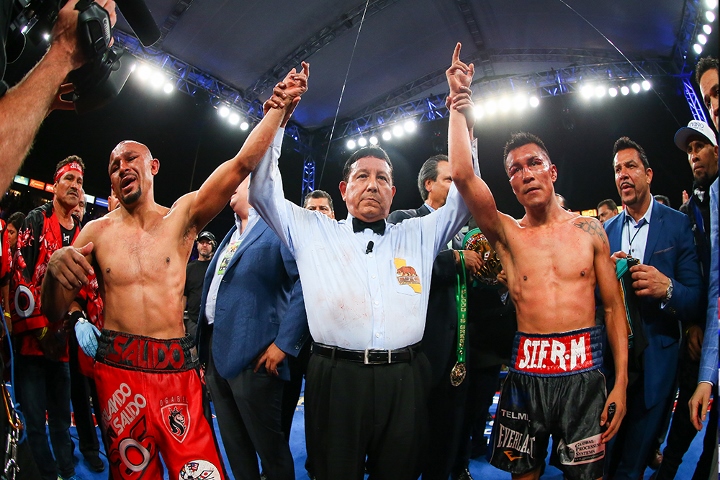 Nick "La Calavera" Arce (8-0, 6 KOs) of Los Angeles battled Francisco "Panchito" Dominguez (8-10, 2 KOs) of Ciudad Juarez, Mexico in a six-round super featherweight bout, delivering victory by unanimous decision and winning all rounds for the three judges, 60-54. Arce controlled the fight from the start, chasing Dominguez around the ring and scoring a number of strong shots to his head. 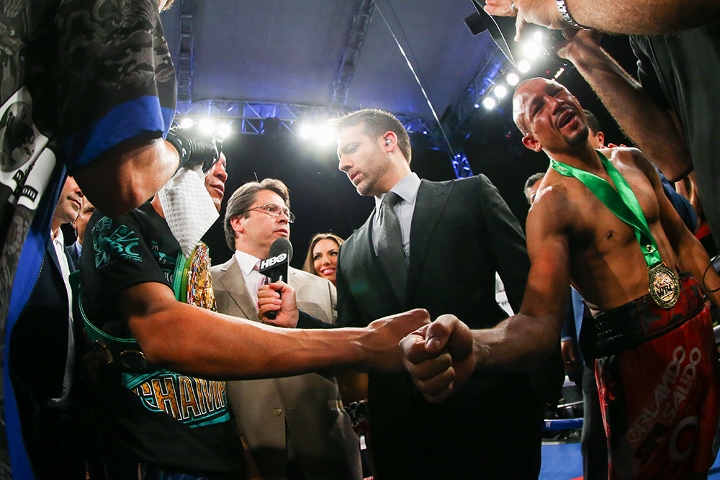 "I'm very happy I got the victory," said Arce. "I trained for everything to go as planned, as it did. My opponent is a tough guy who can take lots of punches and I feel good about this fight. This is what I came out here to do."

Jonathan "Thunder" Navarro (6-0, 5 KOs) of East Los Angeles fought a scheduled six-round super lightweight bout against Marc Torres (4-2, 1 KO) of McAllen, Texas, winning by knockout 1:21 into the second round after devastating Torres with body blows. Late into the first round, Navarro leveled Torres with a body blow that sent him to the mat, getting up just in time for the bell.

"I could tell in the first round that his body was open," said Navarro. "When I got him down in the first, I knew then, for me, that this fight was all about body shots. I could see he was wobbling in the second round. And that's when I was able to take him down with a body shot. Like I said at the weigh-in, anybody can talk - but we will see if they can back it up. I was able to back it up."

Alexis Rocha (3-0, 2 KOs) of Santa Ana, Calif. won a four-round super welterweight bout against Anthony Woods (0-5) of Las Vegas by scoring 40-36 across the three judges for his first unanimous decision of his young career. While Woods was aggressive with his punching, he couldn't land many on the quicker Rocha who bobbed and weaved throughout the fight.

"I come out to win and I was expecting to knock my opponent out, but he was giving me a ton of trouble in the ring," said Rocha. "If I ever lose a fight, my opponent is going to have to knock me out to take me down. Every fight for me is a learning experience, and I know now what I'm going to have to do to improve - including working on my combinations and staying collected during the fight."

Genaro "El Conde" Gamez (2-0, 2 KOs) of San Diego won his fight in a four-round lightweight bout against Juan Bryand  (1-4) of Laredo, Texas with a knockout 1:36 into the first round, falling after a series of strong body shots.

"It feels really great to be out here and to put on a show for my fans," said Gamez. "I went in ready, training very hard and ready to get the job done. This is my first fight at the StubHub Center and my second professional fight, and everyone can expect a lot more to come from me."

Opening up the card, Oscar Duarte (5-0, 2 KOs) of Parral, Mexico won a unanimous decision in his four-round lightweight bout against Luis "Lichito" Lizarraga Jr. (5-9-1, 2 KOs) of Merida, Mexico, with all three judges scoring the fight 40-35.

"So this is my second time fighting in a venue this size," said Duarte. "This motivates me to keep going and to give me momentum. I'm very happy with this victory, and I know it's because of me that my team's able to work hard and develop a tactic to attack."

Francisco Vargas vs. Orlando Salido was a 12-round battle for the WBC Super Featherweight Championship presented by Golden Boy Promotions in association with Zanfer Promotions and sponsored by Cerveza Tecate, BORN BOLD, Casa Mexico Tequila and HANDS OF STONE: The True Story of Roberto Duran, in theaters this August. The HBO Boxing After Dark telecast began live at 10:30 p.m. ET/PT. The RingTvLive.com live stream began at 7:30 p.m. ET/4:30 p.m. PT.