The stage is officially set for the rubber match between a pair of future Hall of Fame prizefighters in Manny Pacquiao and Timothy Bradley Jr. The two will collide Saturday evening, headlining a four-bout HBO Pay-Per-View event live from the MGM Grand in Las Vegas Nevada.

Not only did they both easily made weight, but did so in boasting supremely conditioned physiques. Pacquiao was a ripped yet light 145.5-pounds for what could be the final fight of his incredible career. Bradley checked in at a freakishly chiseled 146.5-pounds. 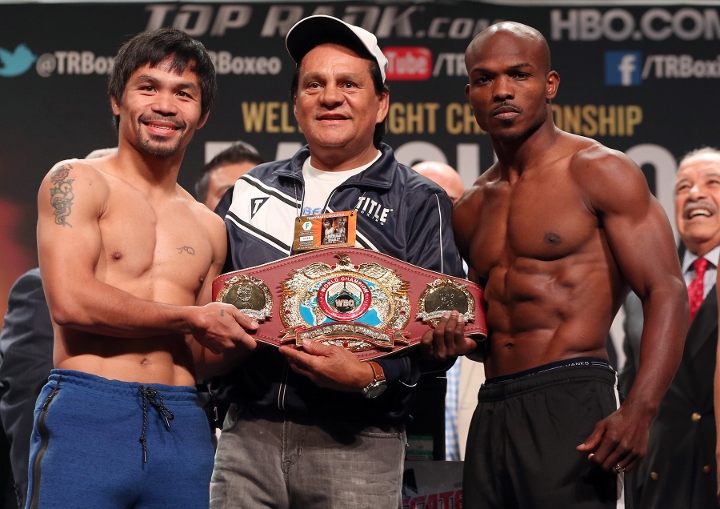 Pacquiao (57-6-2, 38KOs) returns to the ring for the first time since his 12-round loss to longtime pound-for-pound rival Floyd Mayweather last May. The five-year buildup helped produce the most lucrative event in boxing history, but also saw Pacquiao's worst performance in years as he reportedly fought through an old shoulder injury that his team claims is now fully healed. 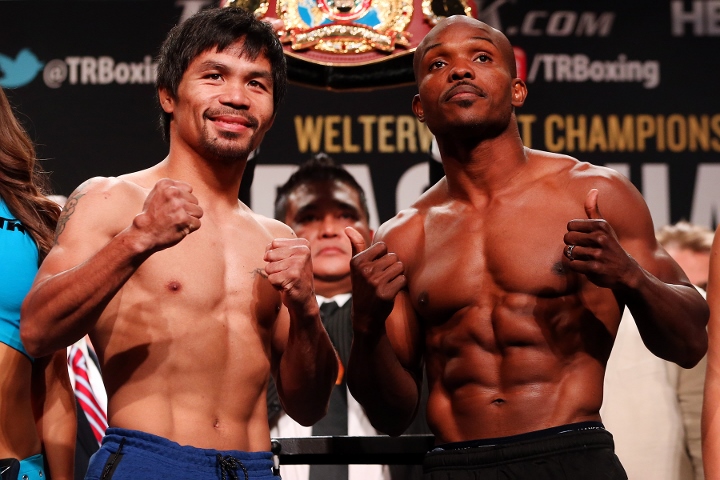 The wildly popular Filipino southpaw has won titles in eight classes and - with a win on Saturday - will become the first boxer in history to win genuine World (lineal) championships in five separate weight classes. 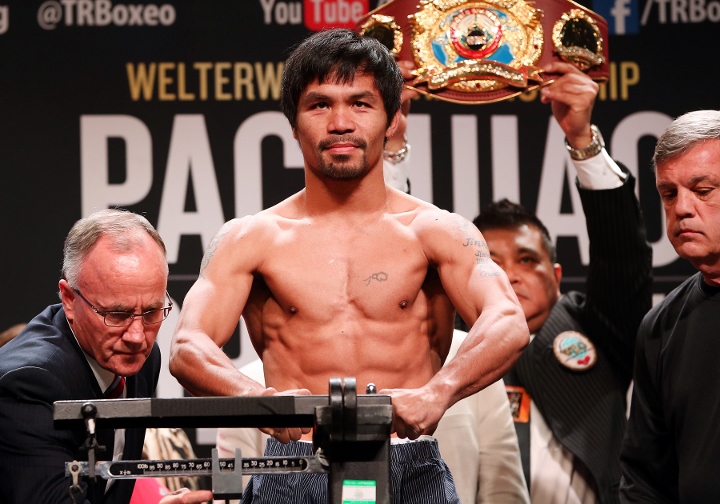 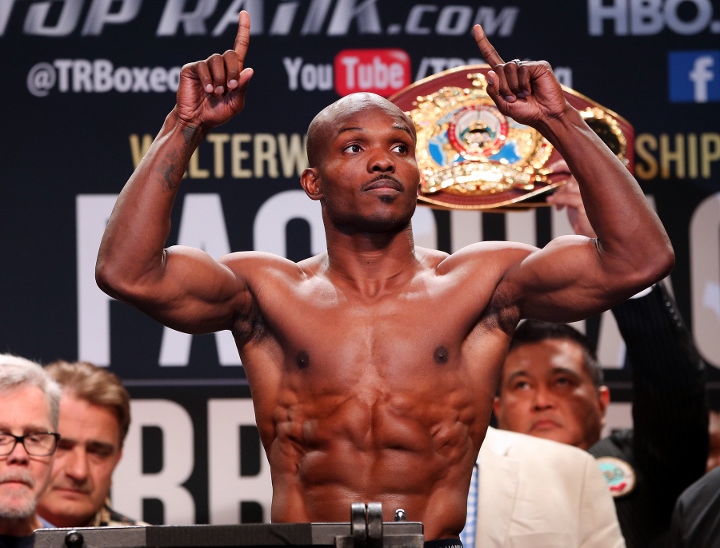 The always confident boxer from California firmly believes Atlas is the final piece to the puzzle that will allow him to establish long-desired superiority over Pacquiao. Despite the boxers having split their previous two bouts, most believe that Bradley should be 0-2 in the series. 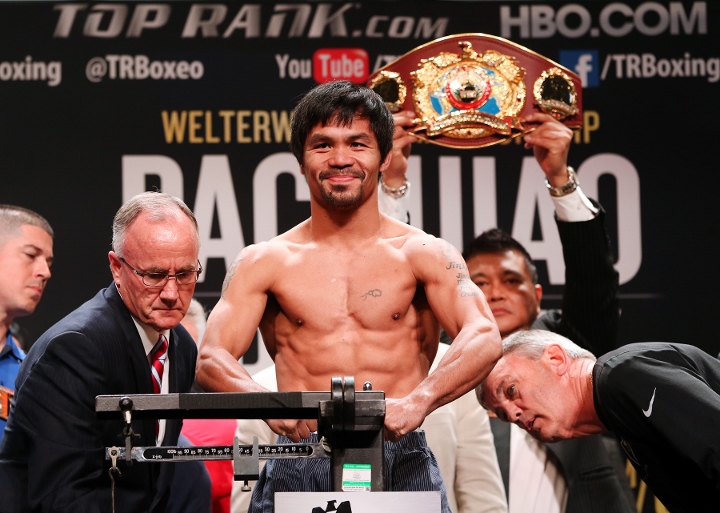 Controversy swirled from their first fight in June '12, with Bradley ending Pacquiao's welterweight title reign following a highly questionable 12-round split decision win. He made two successful defenses before conceding the crown to the legendary Filipino in their April '14 rematch. 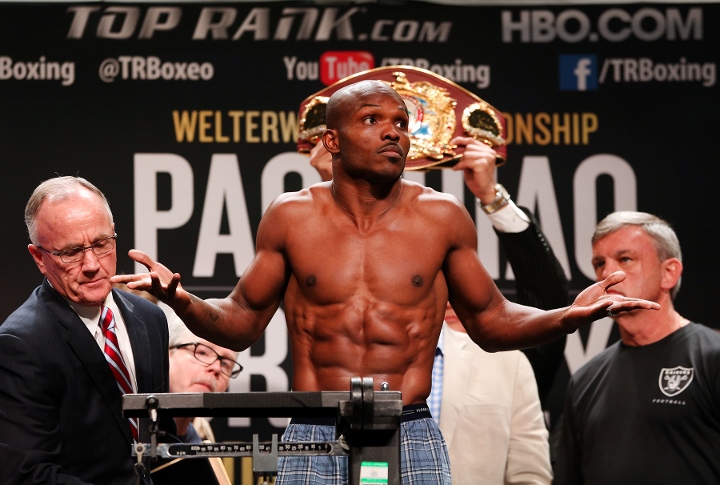 The revenge win for Pacquiao marked the only time in his career that he became a two-time titlist in any of the eight weight classes in which he's collected belts. He has also held the lineal championship at flyweight, featherweight, super featherweight and super lightweight, with alphabet title wins at super bantamweight, lightweight, welterweight and super welterweight. 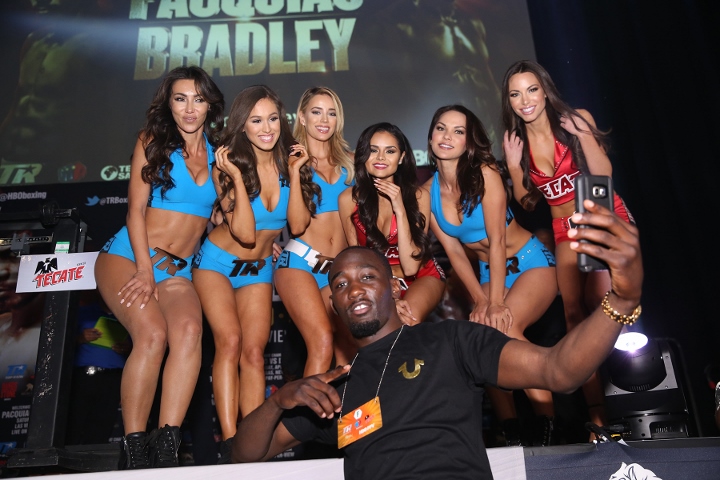 Mayweather is the only other boxer in history to lay claim to lineal crowns in four weight classes, picking up his final championship in his aforementioned win over Pacquaio last May. A win on Saturday could allow Pacquiao to surpass Mayweather in the record books without having to seek revenge. 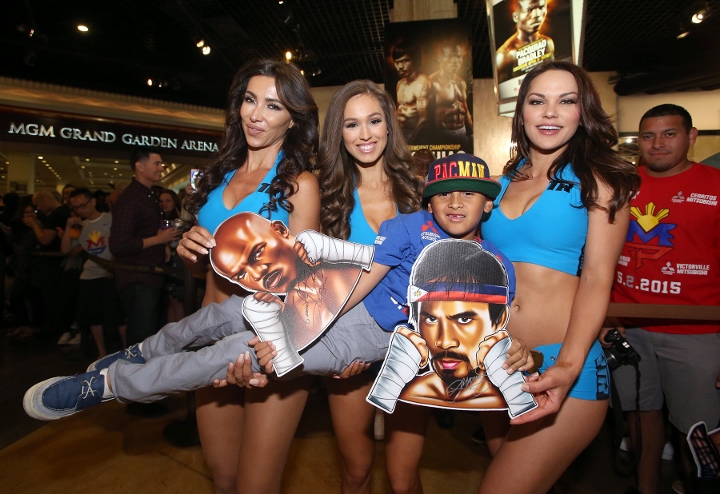 ABRAHAM, RAMIREZ IN PURSUIT OF HISTORY

The evening's chief support could easily be a main event battle on any other major event - and in fact was originally slated to headline a blockbuster show in Germany. Instead, event handlers decided that the super middleweight title fight between defending champ Arthur Abraham and unbeaten mandatory challenger Gilberto Ramirez belonged on this show. 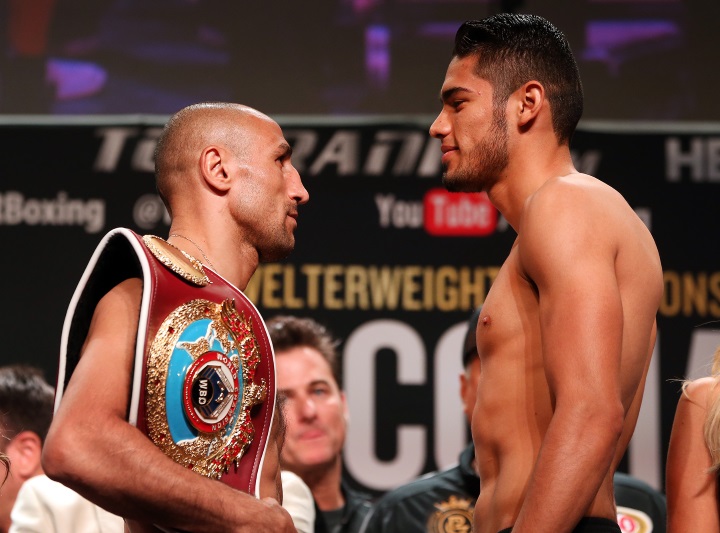 Their scheduled 12-round battle carries historical implications as long as a winner is produced.

Abraham (44-4, 29KOs) came in at a rock solid 168-pounds for the sixth defense of his second tour as a super middleweight titlist. A win will make him the first ever boxer from Germany to emerge victorious in a title fight in Las Vegas. 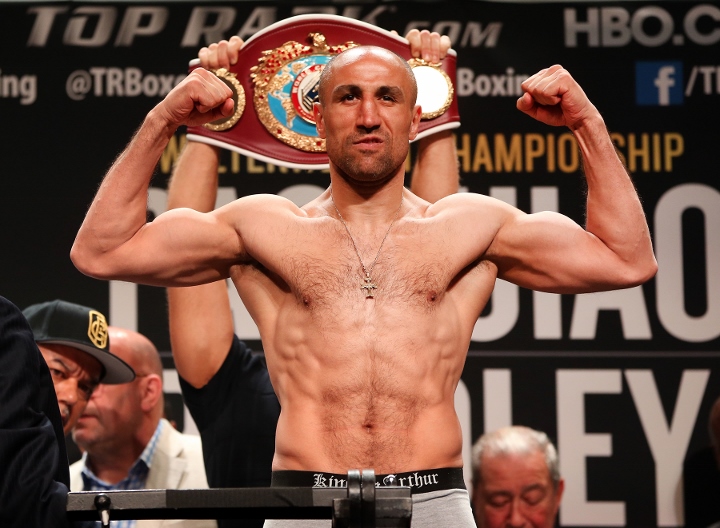 He previously served as a longtime middleweight titlist, making 10 defenses before moving up to super middleweight for Showtime's celebrated Super Six tournament. The series nearly ruined his career, being dealt three losses in a span of five fights (four tournament-based, plus a confidence rebuilding win wedged in between). However, the 36-year old Armenia-born Germany-bred and based boxer has since enjoyed two separate super middleweight title reigns, both coming at the expense of Robert Stieglitz. 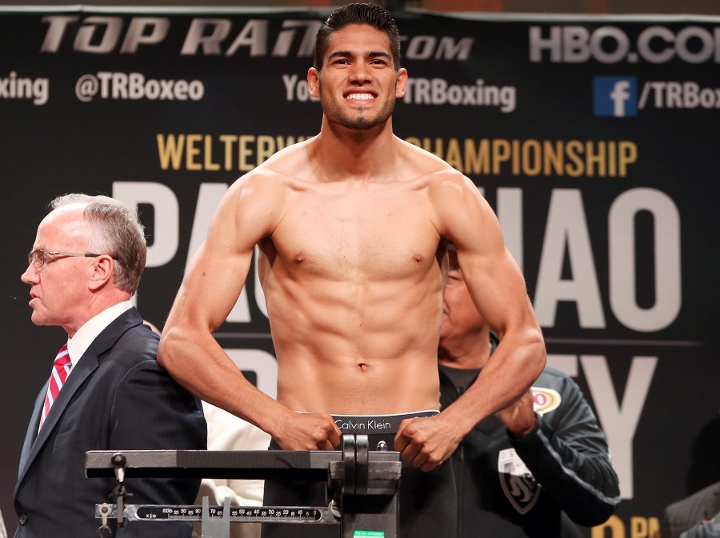 Ramirez (33-0, 24KOs) also weighed bang on the super middleweight limit of 168-pounds for his first career title fight. The 24 year-old contender aims to make history for his native Mexico, which has never boasted a champion at super middleweight over heavier. Saul 'Canelo' Alvarez became the country's first-ever World middleweight champ with his points win over Miguel Cotto last November. 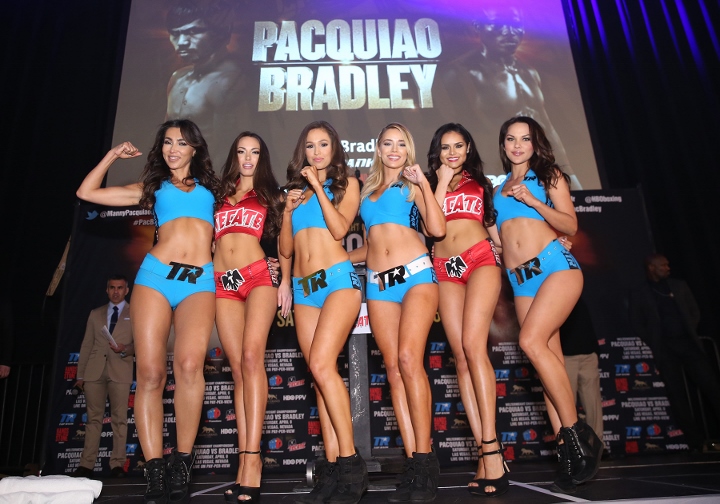 Oscar Valdez, a two-time Olympian for Mexico puts his unbeaten record on the line as he steps up in class versus former featherweight titlist Evgeny Gradovich (21-1, 9KOs).

Both fighters made weight for their scheduled 10-round clash. Valdez (18-0, KOs) officially checked in at 125.5-pounds for his first fight of 2016 following a stellar four-win run in a 2015 campaign that also saw his HBO debut. 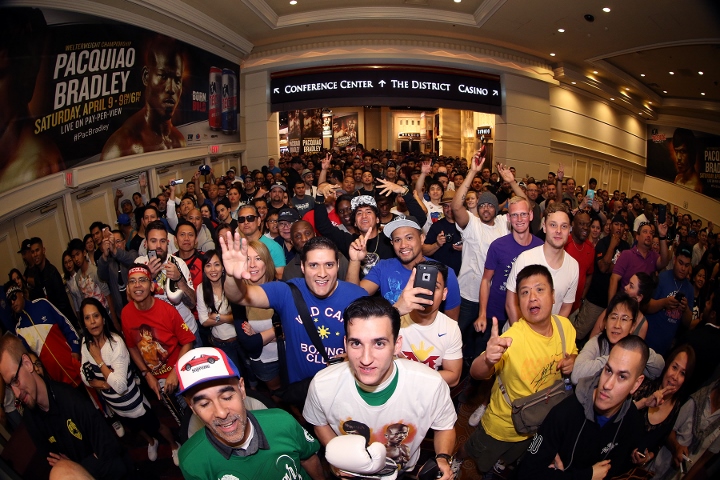 Gradovich (21-1, 9KOs) clocked in at the featherweight limit of 126-pounds in a must-win scenario for the 29-year old affectionately known as "The Mexican Russian." The scrappy featherweight from Russia who now trains out of Robert Garcia's gym in Oxnard, Calif. enjoyed a two-year stay as champ before losing his belt to Lee Selby last May. He has since won two straight. 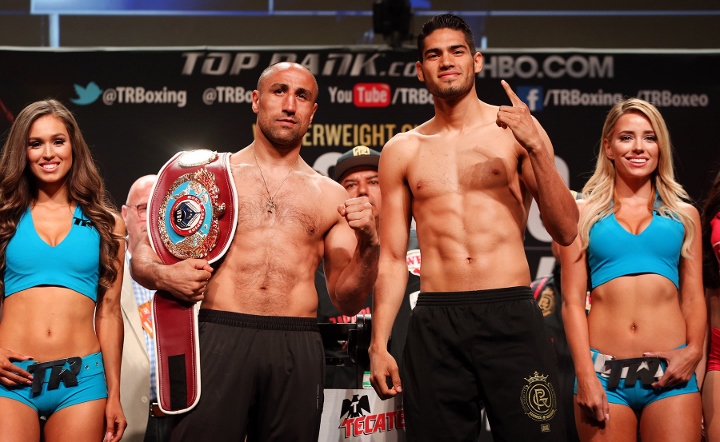 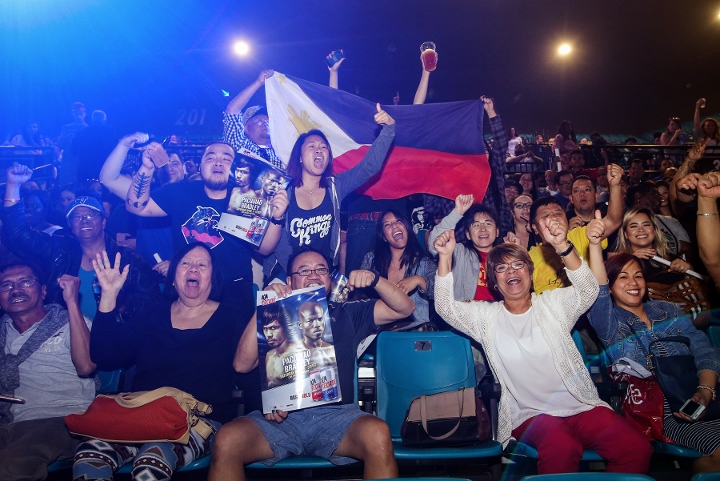 Ramirez - who fights out of the Bay Area city of Avenal, Calif., where he is a leading activist for the area's water coalition - tipped the scales at a trim and ready 138-pounds. Perez (25-11-1, 6KOs) - born in Hawaii but now based out of Denver - weighed 137.5-pounds. 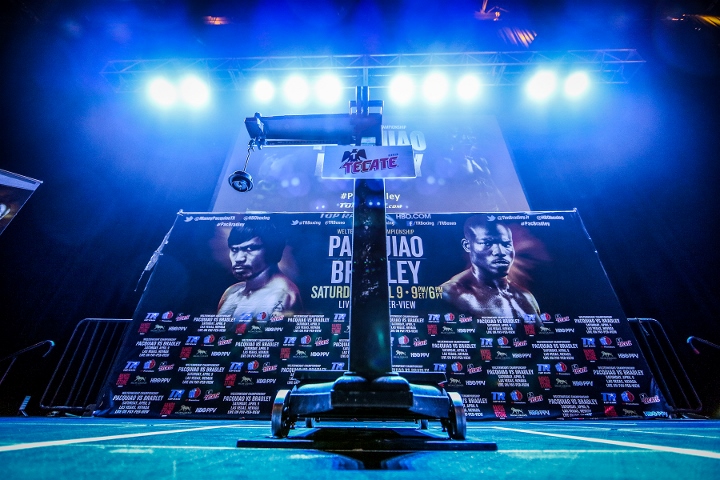 The show will air on HBO Pay-Per-View live from MGM Grand in Las Vegas, Nevada.

Jake Donovan is the managing editor of BoxingScene.com. Twitter: @JakeNDaBox