The biggest fight of the 21st century is now official as far as the scales are concerned. 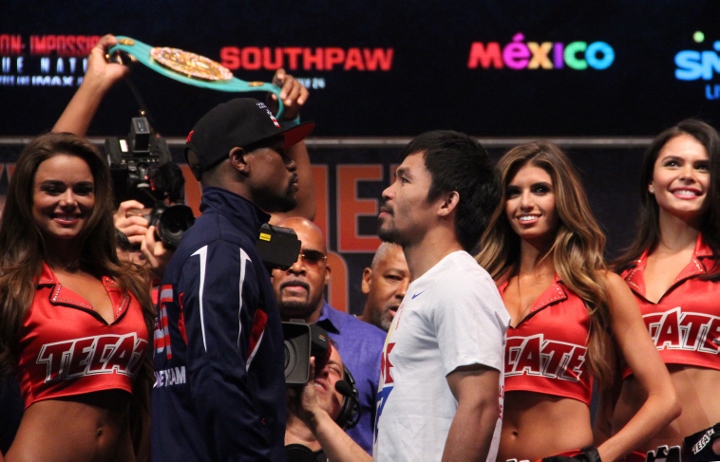 Floyd Mayweather and Manny Pacquiao both easily made weight for their highly anticipated May 2 showdown at the MGM Grand in Las Vegas, Nevada. 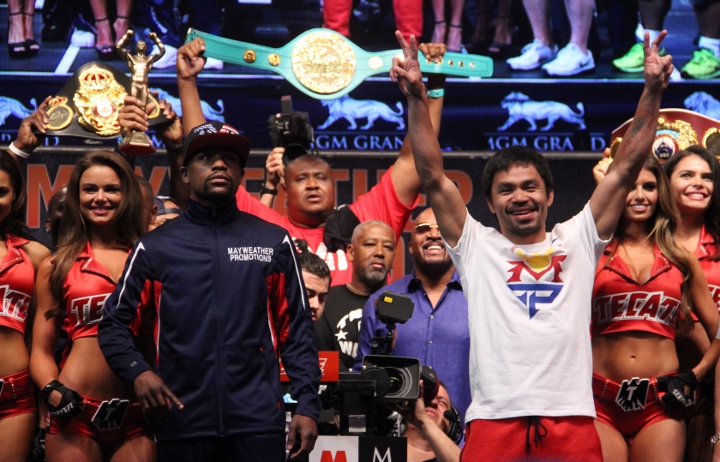 Mayweather tipped the scales at a supremely conditioned 146 lbs. Pacquiao came in at a shredded 145 lbs. 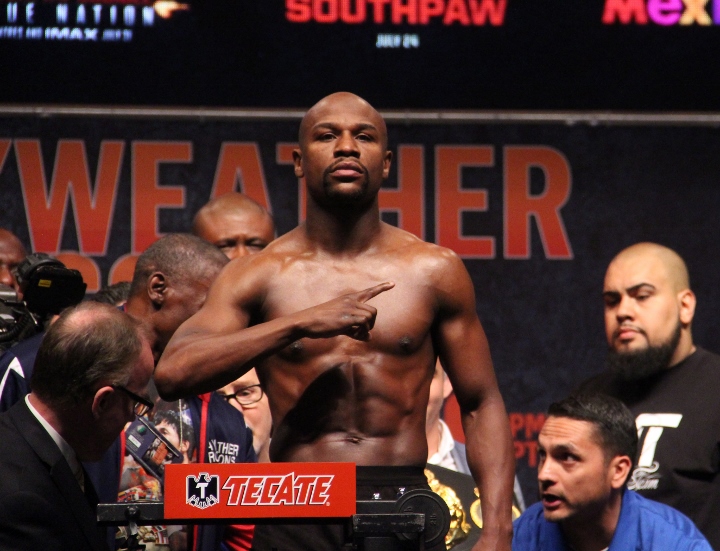 The bout marks a rare occasion where the two best fighters in the world square off in the ring. In such instances, it was the welterweight division that has played center stage. 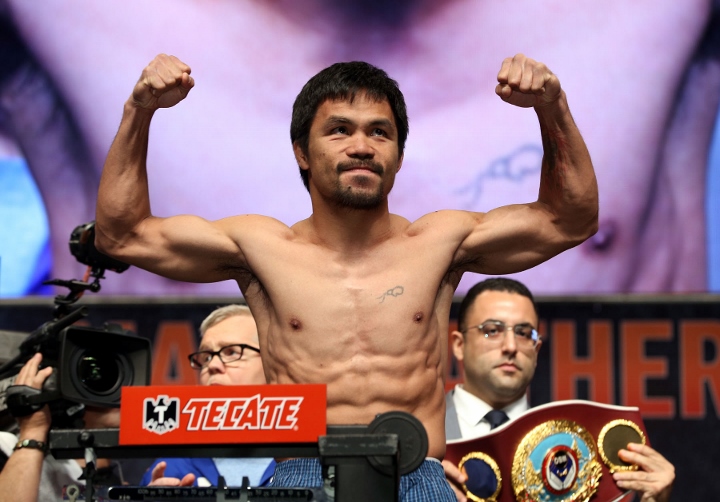 Talks of these two settling their differences in the ring first surfaced in 2009, when Mayweather ended a 21-month hiatus with his ring return while Pacquiao became a full-time welterweight later in the year. 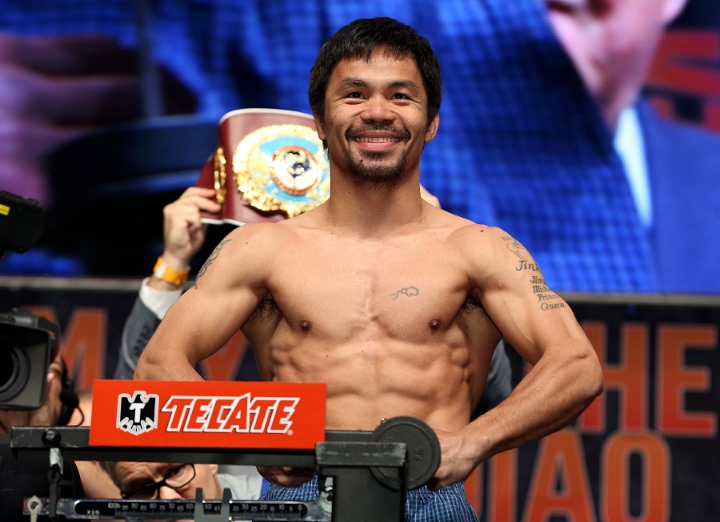 Negotiations were well on their way to leading to a head-on collision, only for talks to break down over drug-testing protocol. In the five years since, it's been an exhausting battle of both camps arguing over whose is bigger, while heading in their separate directions facing anyone other than each other. 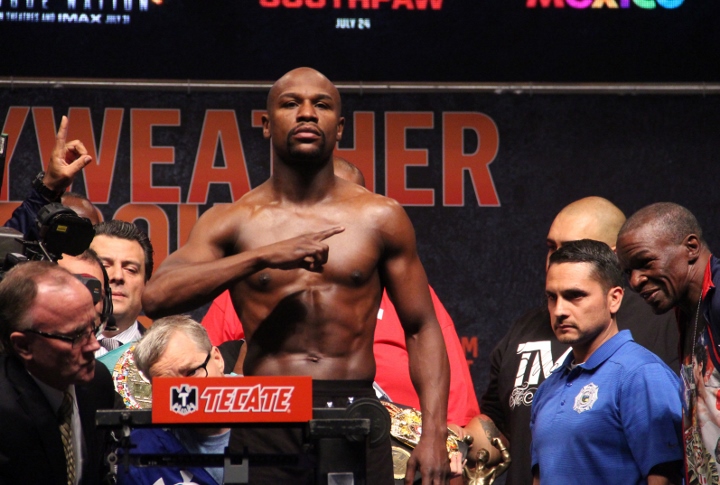 From the fallout of their initial round of talks, Mayweather went on to reclaim the World welterweight champon he vacated upon his faux retirement in 2008. A 12-round win over Shane Mosley in their May '10 showdown saw Mayweather regain the championship he won in 2006. 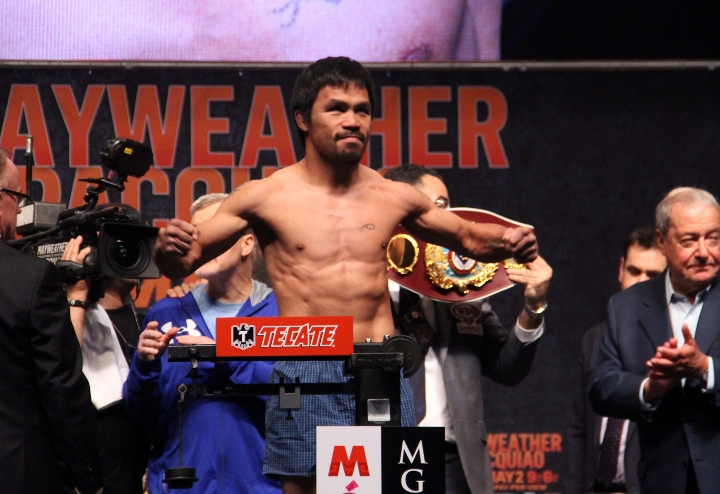 Saturday will mark fifth defense of the welterweight crown under his current reign. During that time, Mayweather also owns wins over Miguel Cotto and Saul 'Canelo' Alvarez, both of which took place in the junior middleweight division. 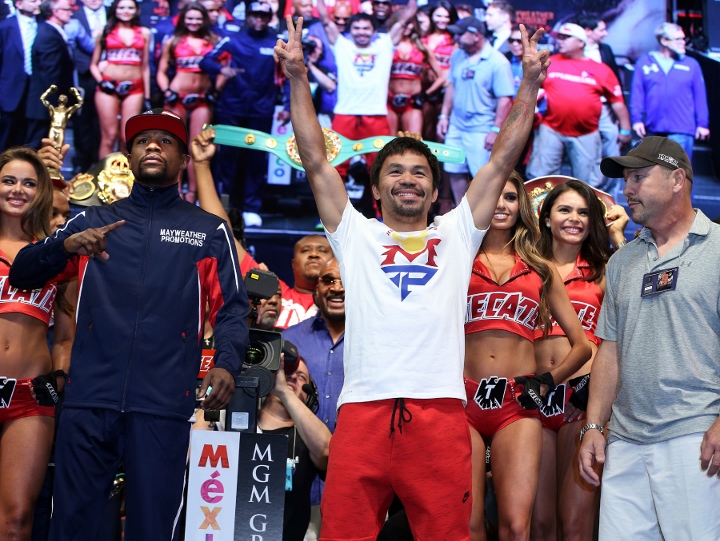 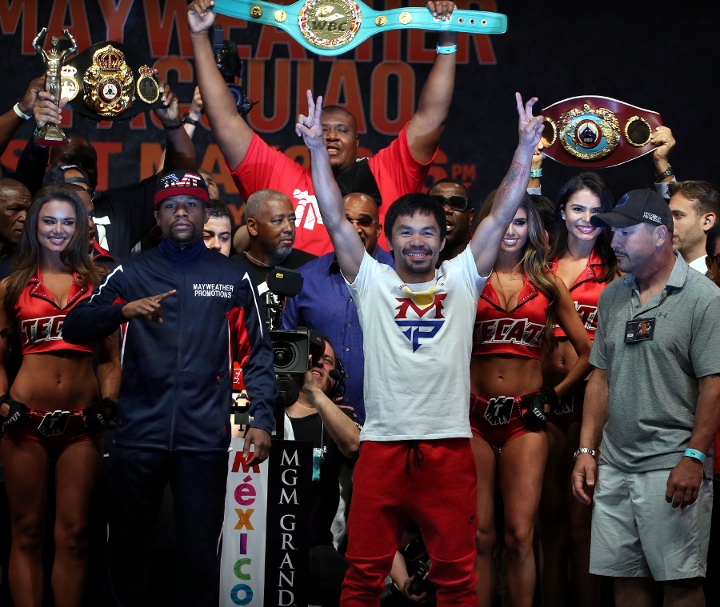 The other fighter to do so? The man he will be sharing ring space with this weekend. 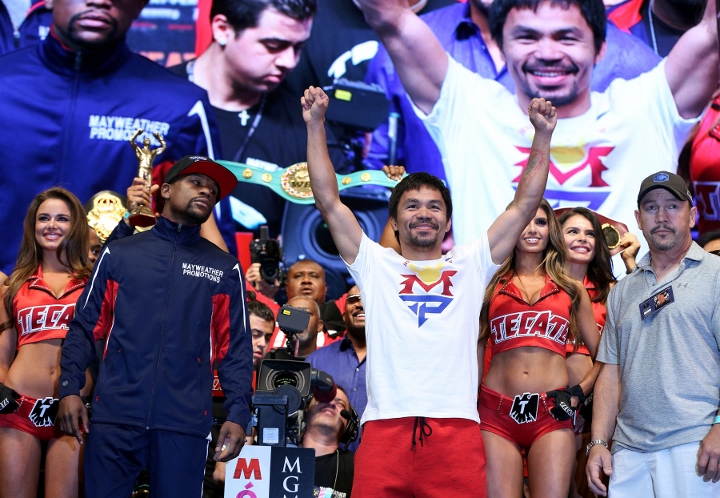 Pacquiao entetred the history books in each of his two fights in 2009. His 2nd round knockout win over Ricky Hattom - which many insist is his best win among his Hall of Fame career - earned the World junior welterweight championship, after having held such honors at flyweight, featherweight and junior lightweight. 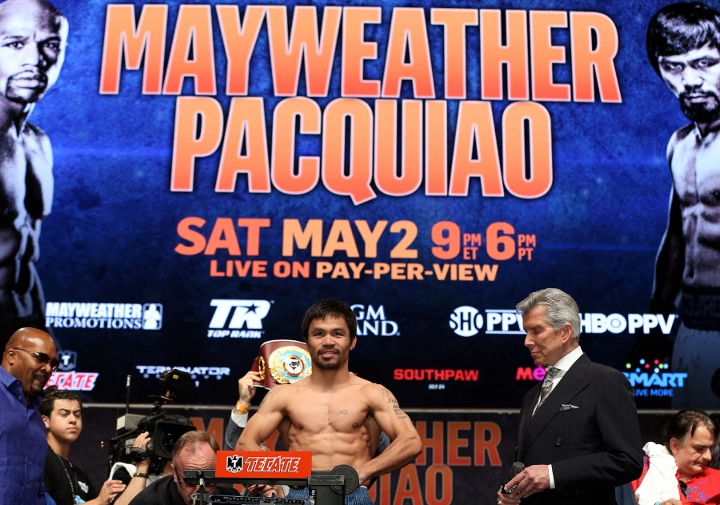 Six months later, the Filipino superstar knocked out Cotto in 12 rounds to claim a welterweight title, a record seventh weight class conquered. He would add to that total with a vacant junior middleweight title win over Antonio Margarito in 2010. 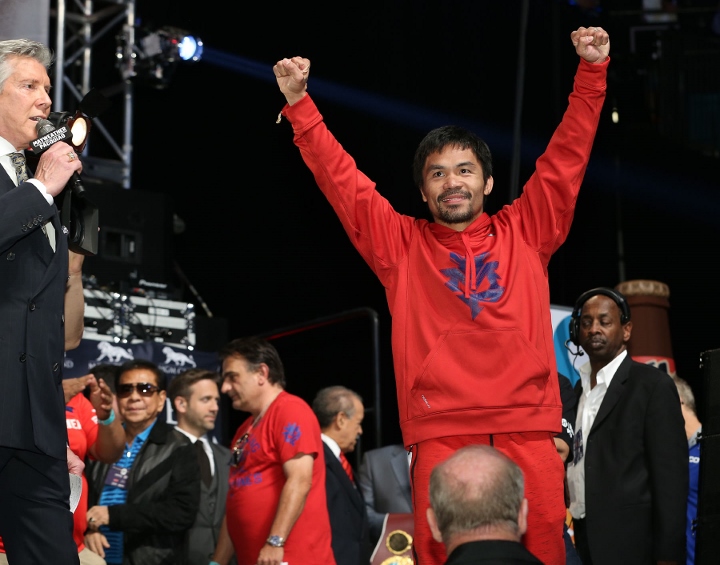 All hope appeared to be lost when Pacquiao was knocked out by Juan Manuel Marquez in their epic fourth fight in Dec. '12. Further driving a wedge between the two was Mayweather's defection from HBO - with whom Pacquiao remains faithfully aligned - for Showtime, signing a record-breaking deal estimated at more than $200 million. 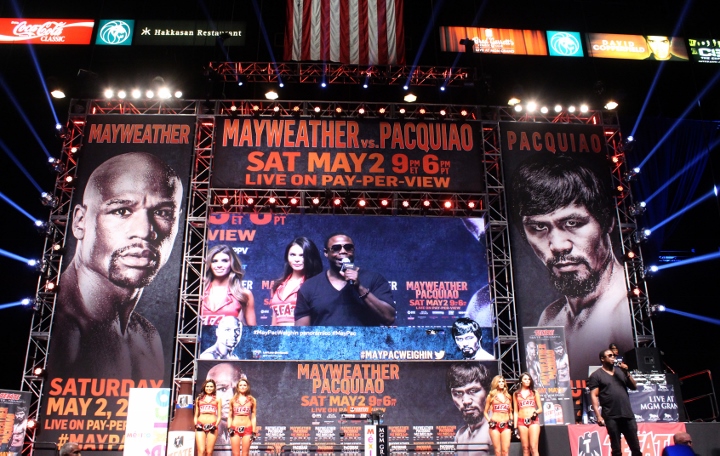 Demand for the fight reached a fever pitch when both fighters saw a massive decline in Pay-Per-View sales in their four combined bouts in 2014. Talks floundered until the two fighters happened to attend the same Miami Heat game in late January. The meeting at center court during halftime sparked an incredible buzz, and a subsequent meeting in Pacquiao's hotel room allowed both fighters to know where the other stood. 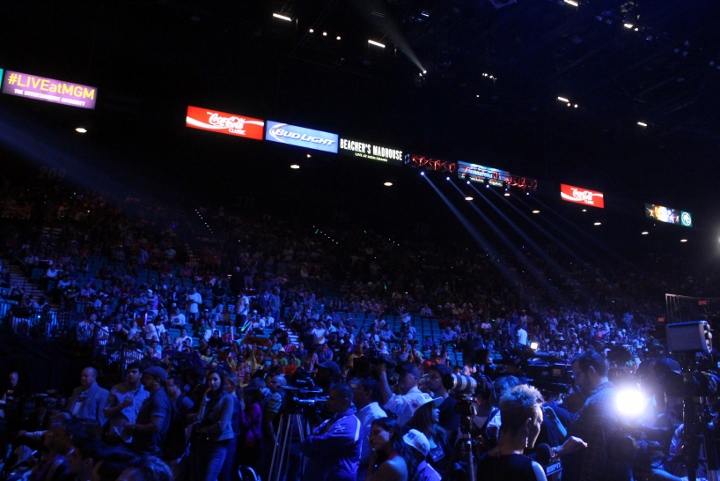 One month later, the fight was signed and sealed, officially kicking off a stretch that leads to what will easily go down as the most lucrative event in boxing history. 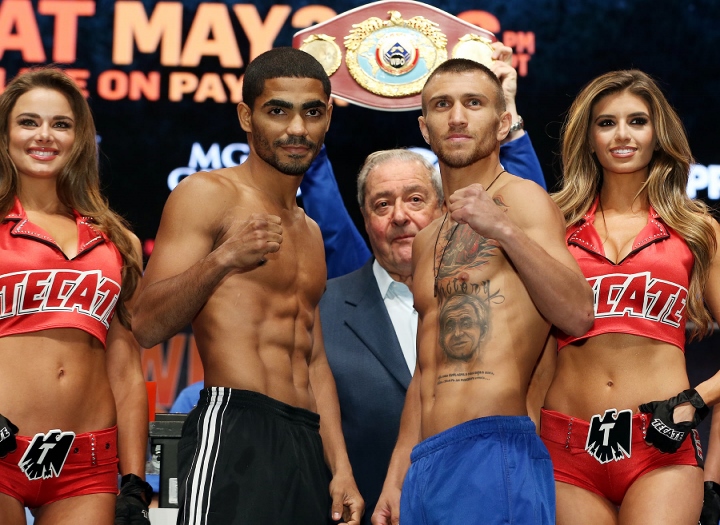 On the undercard, Vasyl Lomachenko defends his featherweight belt versus Gamalier Rodriguez. 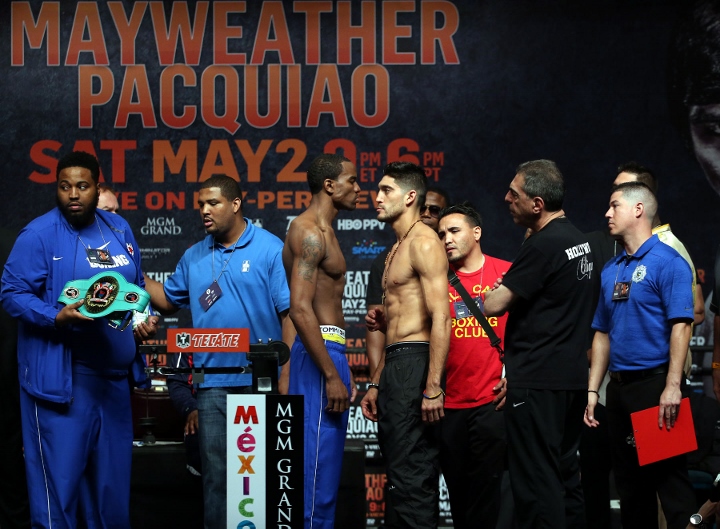 Both fighters made weight for their supporting bout. Lomachenko (3-1, 1KO) - a two-time Olympic Gold medalist - weighed in at 125.5 lbs. Rodriguez - a durable contender from Puerto Rico - weighed in at the featherweight limit of 126 lbs.

Also on the show, unbeaten Leo Santa Cruz debuts in the featherweight division as he faces Mexico's Jose Cateyano in a 10-round non-title fight. Santa Cruz weighed 124.5 lbs., while Cateyano came in at 125 lbs.

Jake Donovan is the Managing Editor of BoxingScene.com. Twitter: @JakeNDaBox