LAS VEGAS - Fighters featured on the pay-per-view undercard of Canelo vs. Khan, held an open workout for fans at the MGM Grand Hotel & Restort today. Co-main event David Lemieux (34-3, 31 KOs), and Glen "Jersey Boy" Tapia (23-2, 15 KOs) who will meet in a 10-round middleweight fight; Mauricio "El Maestro" Herrera (22-5, 7 KOs) who takes on East Los Angeles' undefeated star Frankie "Pitbull" Gomez (20-0, 13 KOs) in a 10-round welterweight fight; and Brazilian star Patrick Teixeira (26-0, 22 KOs) and Curtis Stevens (27-5, 20 KOs) who will open up the Pay-Per-View telecast in a 10-round career-defining middleweight bout. They were also joined by Jason "El Animal" Quigley and Diego De La Hoya, who will fight in respective middleweight and super bantamweight bouts on the non-televised undercard. Photos by Hoganphotos.

Below is what the fighters had to say at today's undercard media workouts:

"The knock against me years ago was that I didn't go up in weight - then I showed them I was successful by jumping up two weight classes. And now Amir [Khan] is attempting to do what I did on Saturday and prove them wrong.

"I like Canelo [Alvarez] in the fight. He'll have a bit of difficulty early, but he'll calm Amir's speed down and make it a fight from inside and not a fight from distance. I like a Canelo knockout in the 10th or 11th round - TKO." 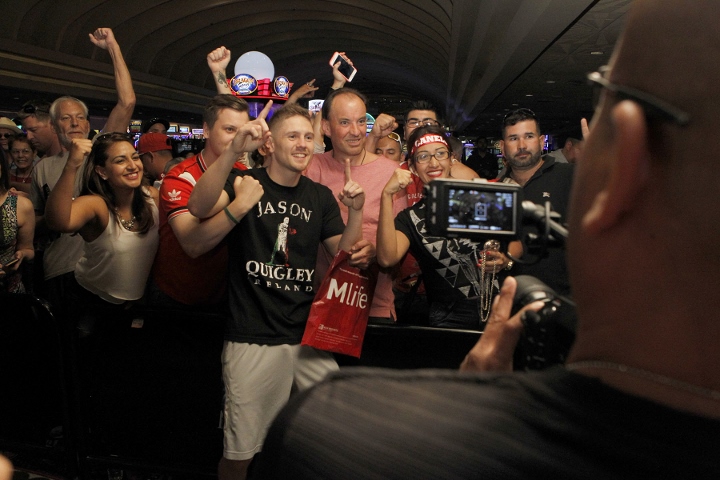 "My fight with [Glen] Tapia is absolutely at 160 and it's not going to be an issue making weight. It won't be a problem dropping the week before, and our program is right on track. I feel great, and I'm very close to making my weight now.

"I'm expecting a hungry Tapia. He's jumping up weight and wants to prove himself. But he's going to prove it to the wrong guy. He's going to lose.

"I'm not here to lose and I am definitely not going to give [Tapia] the chance. I'm going to be merciless on the mat." 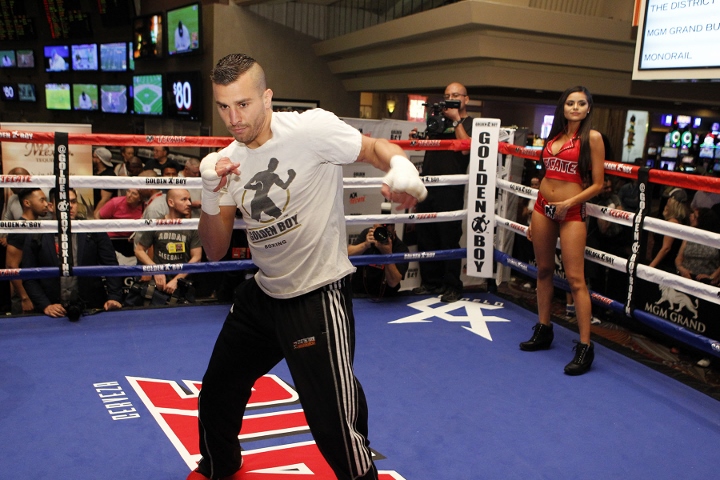 "I'm not killing myself to make this fight. I feel good, I'm full and feel energized because I don't have to cut so much weight, and I'm happy.

"I need to be smart, use my mind and think in there more than just going in there to brawl. Like Freddie [Roach] says, it's more about my mind than my heart.

"It's going to be a fun fight. At the end of the day, I like to entertain but I've got to be smart." 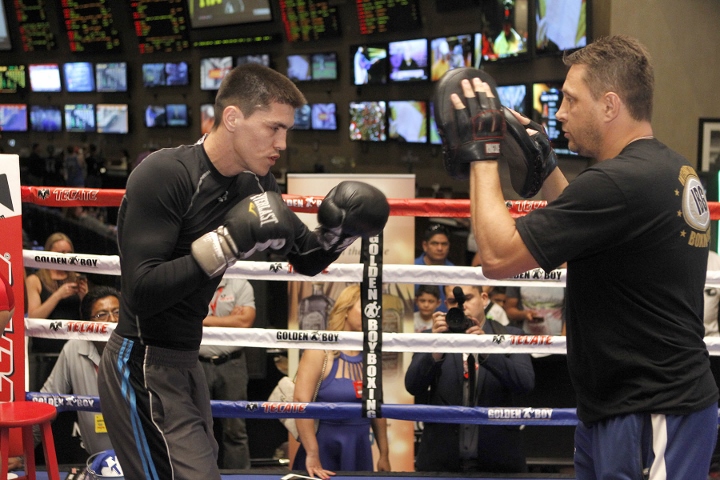 "Nothing phases me at this point in my career. I've been through struggles in my career like all fighters. I'm hungry, I still have fire and nothing is going to get me down. I'll fight the best and undefeated, whatever it takes.

"It pumped me up when the fight was booked by seeing [Gomez]'s undefeated record. It's something that motivated me in the gym to work out.

"I hope this weight is a comfortable weight. I feel strong in this weight class, and we'll see what happens Saturday.

"I want to make an exciting fight for the people, but I do want to win this fight. I have to be very conscientious because Frankie Gomez is a strong puncher - I've dealt with him before. I have to play to my strengths and be whom I am.

"I'm excited to have the opportunity to fight at the new T-Mobile Arena." 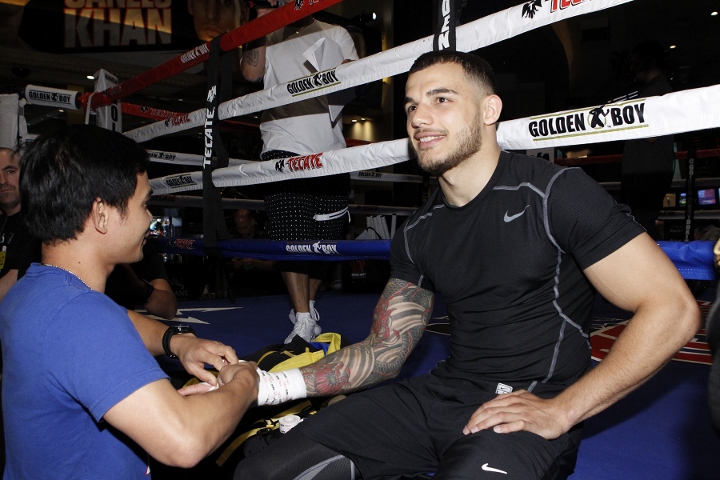 "I'm always calm before a fight. It's been like that since I was 5 years old. You know, going in the ring, [Herrera] is a guy just like anyone.

"People think he's going to come out and take record away from me. I don't really care what people think, it doesn't really get to me. But I'm going to use it to motivate me. In the ring, I just let it go. 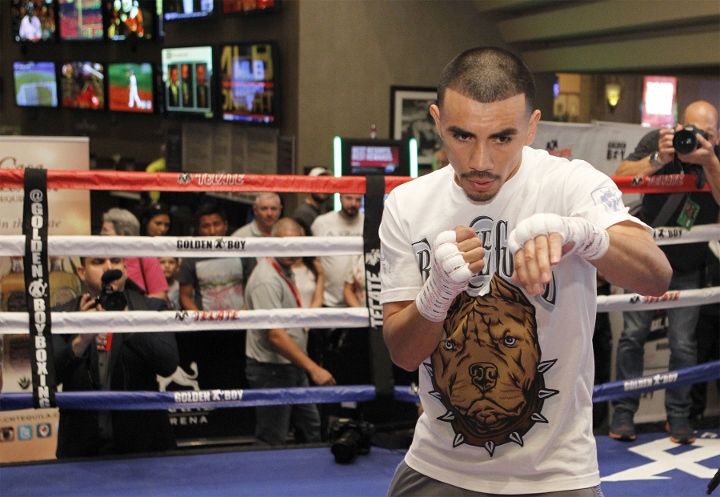 "I really prepared for this fight, I trained really hard. I actually went to Argentina for my camp, and I feel 100 percent.

"I expect a tough fight. He's a tough fighter that throws really hard, but I'm going to throw a lot of punches and I expect to come out with the victory on Saturday." 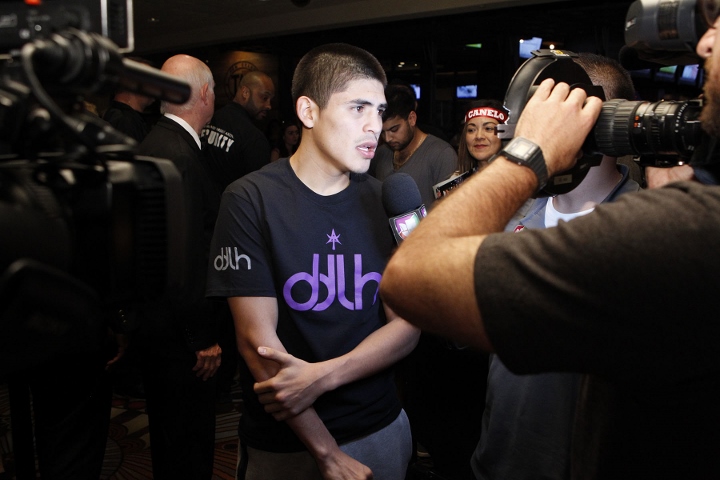 "[Teixeira] has high output numbers. But his punches are very wide, he telegraphs and it'll really show.

"Working out in Canelo's camp was a great experience. It really motivated me to stop doing the garbage I was doing and put another good two-to-three years to my career.

"This fight is important, to get past [Teixeira] and get back into title contention. I just gotta take this all the way." 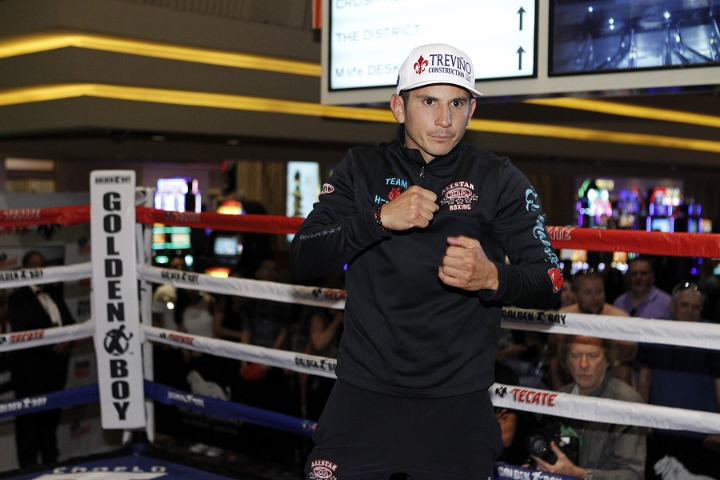 "It'll be a great fight between two undefeated fighters. But we're both well-prepared and I'm coming out here to win.

"I knew that the Diaz Brothers were going to give me a hard training camp, and hard camp in general with the trainers we had.

"I don't want to think to far ahead. I want to take care of this fight and let management worry about what comes next." 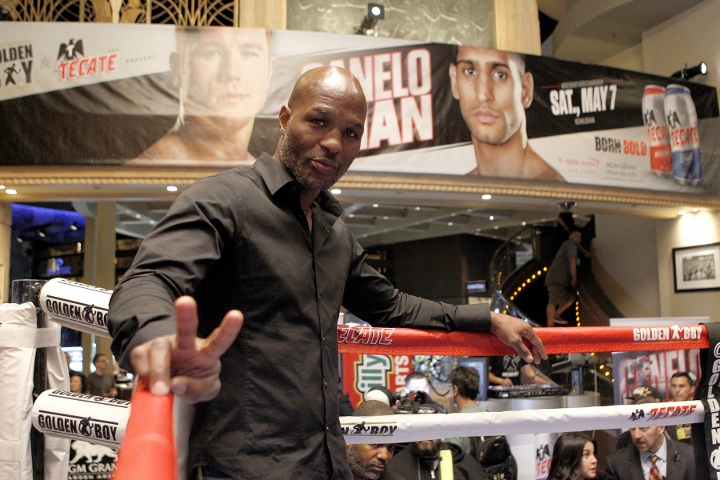 "This fight is a huge opportunity to showcase my talent, and I've trained my ass off for this fight. Diego De La Hoya is an obstacle in the path of my journey and I aim to remove him from that path.

"Boxing's a game of surprises, but as much as it's about surprises it's also about patience and planning. And I'm ready to put on a master-class this Saturday."