Below is what the fighters had to say at today's undercard final press conference:

"We have put together a fantastic undercard bursting with talent. From the opening bout to the main event, each of these undercard fights are sure to bring the action and excitement to T-Mobile Arena leading up to the main event.

"Thank you to our broadcast partner, HBO - the best network for boxing. HBO will broadcast three of the undercard fights on Saturday evening including the co-main event between David Lemieux and Glen 'Jersey Boy' Tapia; the welterweight showdown between Mauricio "El Maestro" Herrera and Frankie 'Pitbull' Gomez; and a 10-round matchup for the vacant WBC De Las Americas Middleweight Title between Brazil's Patrick Teixeira and Brooklyn bomber Curtis 'Cerebral Assassin' Stevens. 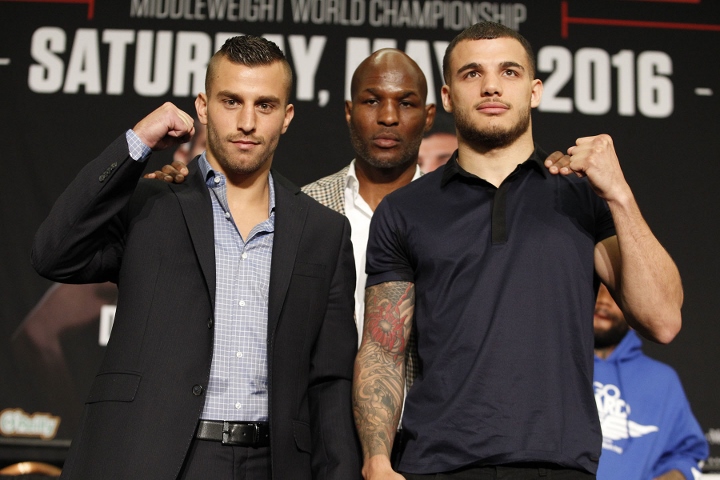 "To get fight fans ready for the final four bouts of the evening, the Canelo vs. Khan preliminary undercard will present two action-packed battles starring two of the game's top rising stars, streaming live on HBO Boxing YouTube Page. In a 10-round super bantamweight bout, Mexicali's Diego De La Hoya will put his perfect record on the line against Shane Mosley's Rocco Santomauro of Duarte, California, putting back life into the De La Hoya vs. Mosley rivalry. 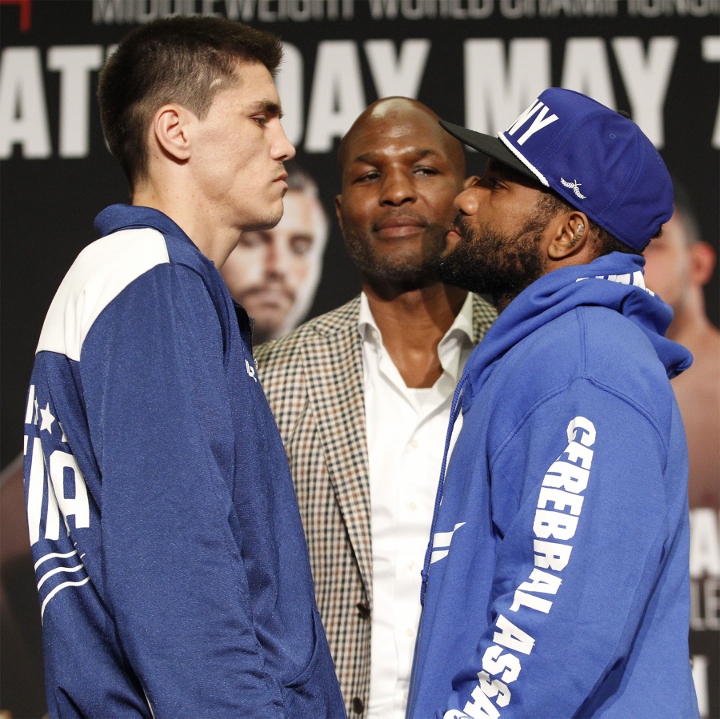 "I am excited to be a part of this. Undercard boxers have an opportunity to get into it. Two of the biggest months in boxing are May and September. The middleweight class is my baby and in the conversation and that makes me happy. I'm looking for better fights to come. Enjoy, sit back and write what you write, but pay attention." 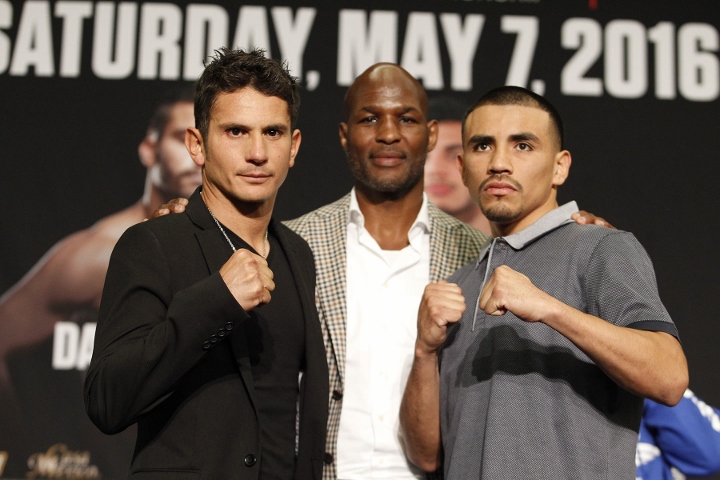 "It's great to be here back on the big stage and preform in from of the world again and make a good mark in Vegas. I am extremely excited to perform well. I am ready and very excited to give the fans a great show and they will not be disappointed at the end of the night. Thank you to Golden Boy. I try not to leave anything behind in the gym. We'll see how Tapia comes with on his end, and I'm excited to see the Canelo - Khan fight." 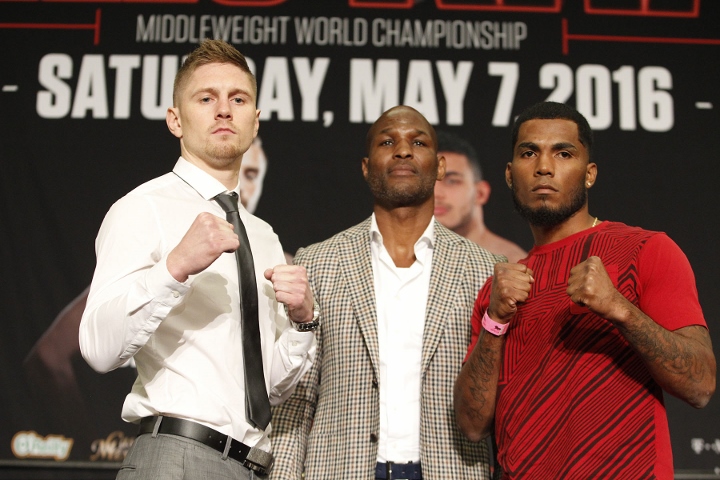 "To tell you the truth, I know most of you guys have me losing this fight but I know what I can bring to the table. I learned from all my losses and I can't wait to show you guys what I can do. And when we look back, we can show you how wrong you were." 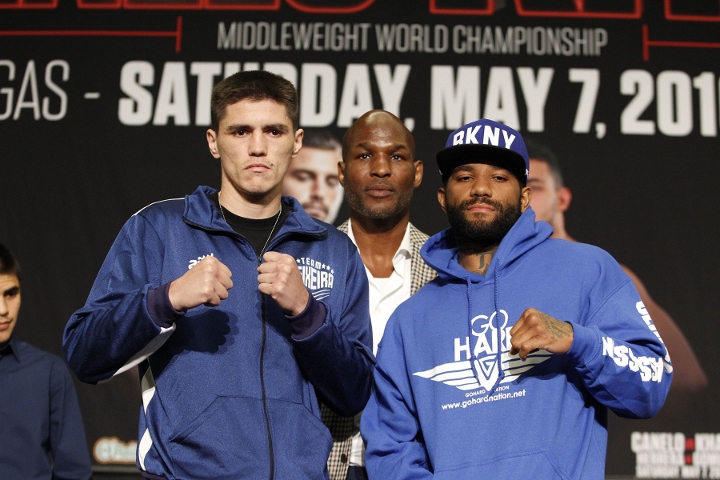 "This fight is going to be very tough, Lemieux is ready. Tapia is ready too though. We had a very great camp under Freddie Roach."

"I never dreamed of getting this far and I am hoping to stay at this level. I've fought six to seven undefeated guys and I gave them hell. Fighting an undefeated fighter is nothing new. I'm a dream killer. Bring me any prospects and lets see if they are the real deal." 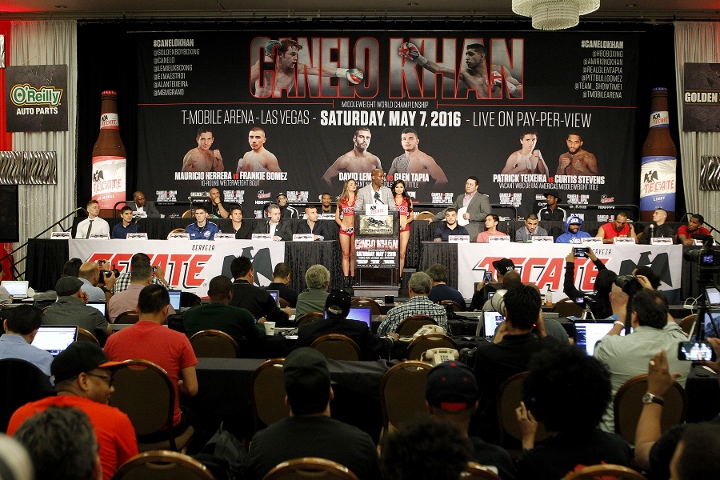 "I'm really excited to be apart of this event. I know my opponent is strong, but I am ready to do my best. This is my second opportunity, and I will take advantage of it."

"I'm really excited to be a part of this event. I know my opponent is strong, but I am ready to do my best. I want to take the future world title back to Brazil." 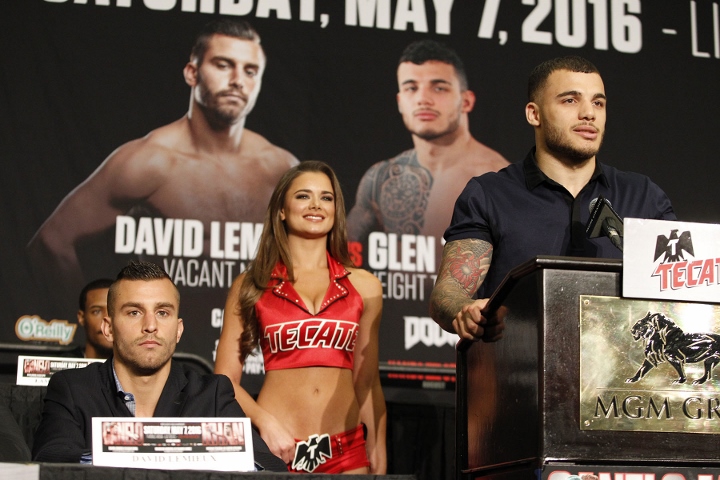 "I am physically ready, in great shape, and mentally prepared. Momma said to knock you out."

"People in the sports world have been talking, 'Is Curtis ready? What makes this opponent great? This is the first fight. He has more experience in the ring." 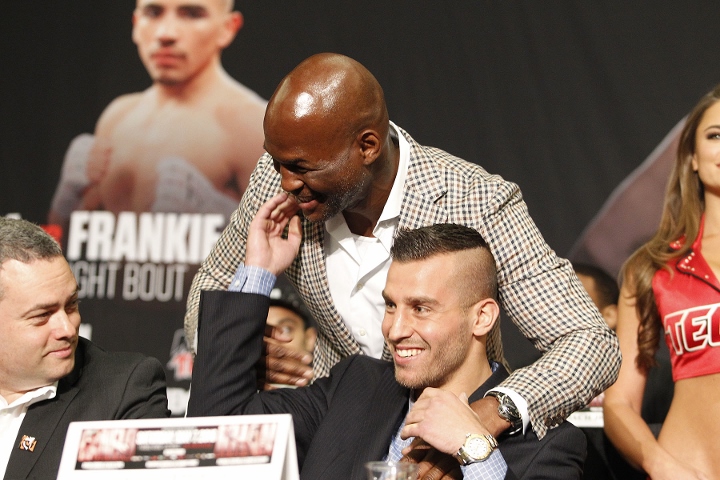 "If he wants to fight I will leave my life in the ring like a war. Like every great Mexican."

"I want to thank Golden Boy and give a huge thank you Diego De La Hoya. I am here to win. Not a lot of prospects want to take on other undefeated prospects, and we are here to put on a show." 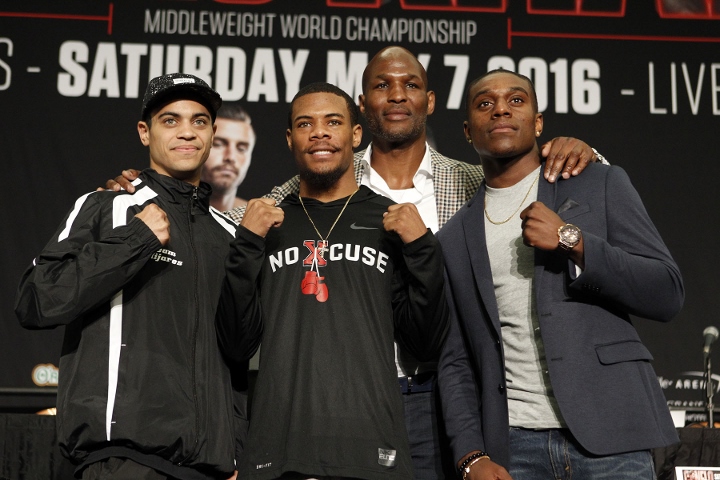 "I'm excited and it's like I'm fighting. This will be a great fight on the undercard on Saturday night." 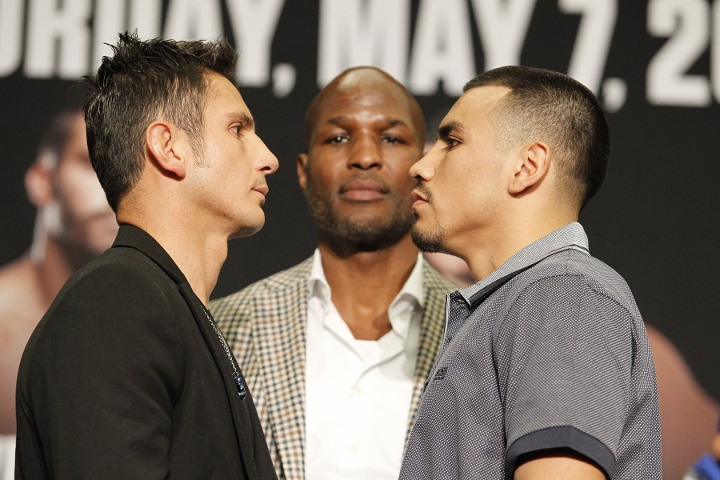 "I'd just to like to take a chance to thank everyone. A lot of Irish fans came out, and I know what I am capable of. I have sparred over 160 rounds. Not only this for this fight, but for every fight, I come at 110 percent. This is why I came from Ireland. Come Saturday night, I'm ready to take care of business."

"I'd like to thank everyone. I want to thank the man upstairs. I hope Quigley's ready 'cause I'm ready and I've trained hard to leave my mark." 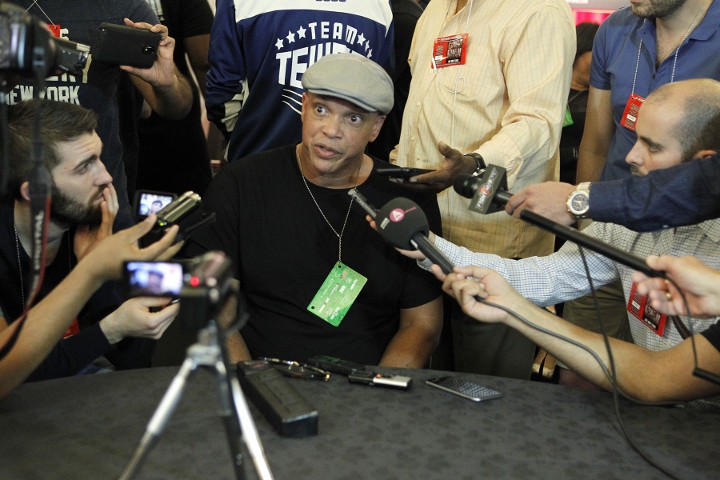 "Happy Cinco de Mayo! Thank you to everyone for putting me in this position. This is my second Pay-Per-View card. Bernard Hopkins told me to take full advantage of it and obviously I did. I appreciate everything and I am excited."

"My birthday is fight night. Thank you Golden Boy Promotions. I had the best sparring training, and I am ready to go and ready to give on a show."

"Man, this is something else and I am very fortunate to be treated like this. I want to thank Golden Boy Promotions for the fight and for being on the undercard of these amazing fighters. I can't wait to get in there and get my job done." 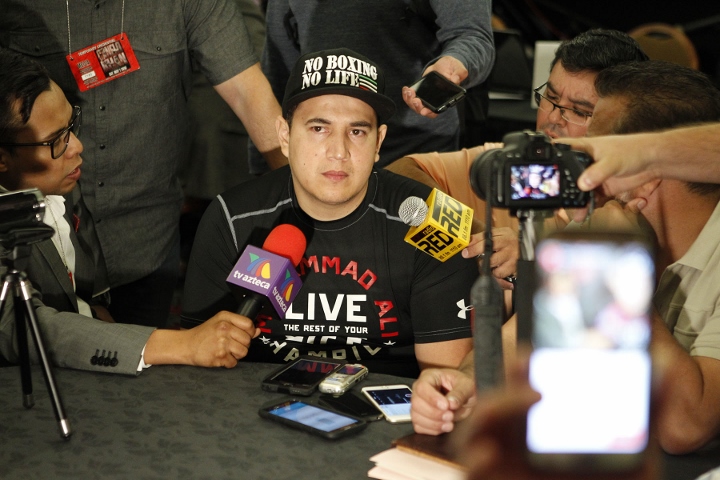