Twelve days out from the most important fight of his career, O’Shaquie Foster was in the zone, that sweet spot in training camp where everything is starting to come together at the right time.

Yet through it all, Foster took time from his own work at the Main Street Gym in Houston to help out the kids, who he calls his biggest fans.

“The business is so tough that I just try to help guide them,” he said. “Especially with the ins and outs of the sport, I tell them to stay focused and learn the discipline that comes with the sport, so even if they don't go as far as they want to in the sport, that discipline is there. That helped me a lot through my life. What I try to get out to them is to grow, whether it's in boxing or anything. Get better, stay focused and try to dedicate yourself to whatever you're doing, and you'll see results.”

When the 27-year-old Foster was young in the sport, training in Las Vegas in the Mayweather Boxing, he was the one learning from the established pros. Some lessons stuck, some didn’t, but he was always looking for knowledge that would take him where he wanted to go.

“Ever since I was nine years old, I was around pros and older guys,” Foster said. “I was always the youngest in the gym, so I was able to learn from their mistakes and stuff that they would do, and I would take it and apply it to me growing up. Being around Floyd (Mayweather Jr.) and them when I was staying in Vegas, with Roger (Mayweather) mentoring me, it always stuck with me. So when I go talk to these kids, I try to leave them with something that they can remember.”

What Foster can teach them goes far beyond footwork, combinations and how to hook off the jab. He can tell them how letting the wrong influences in can cost you, not just in your boxing career, but in life. Yet if you persevere and get things right, you can start over.

It’s what he did after a couple early pro losses and a short stint in jail for a shooting incident. And he hasn’t looked back, winning seven straight since a 2016 split decision loss to Rolando Chinea, earning him the headliner’s spot on the premiere of Ring City USA on NBC SN this Thursday night, when he will face veteran contender Miguel Roman.

“I definitely feel like this fight is gonna open it up and let people know that I'm here and that the talent and everything is there,” he said. “It's a great opportunity for the world to see me and for the people that really don't know too much about me or have just seen a few glimpses of me. It's gonna be great.”

The excitement is clear in Foster’s voice, but it’s not just because he’s headlining an event that will have a lot of eyes on it, but due to the fact that he finally gets to step between the ropes after being on the sidelines since improving to 17-2 with a near shutout win over Alberto Mercado in December 2019. Of course, that was before COVID-19 hit and put boxing on pause, but Foster remained focused as he waited for his time to return.

“I've always had a key to the gym, so even with the gym being shut down because of the virus, I was able to go in and train by myself and stay active,” said Foster, who found out during the pandemic that plenty of the top 130-pounders in the world weren’t exactly lining up to fight him once everything started opening up.

“I think it happens a lot, but it just shows the respect everybody's got for me as a real guy,” he said. “But sooner or later, I would love to get all those guys in the ring.” 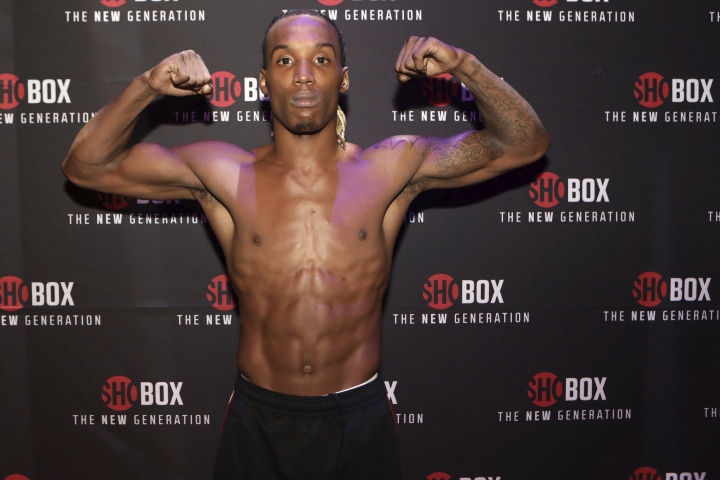 Is that a compliment or a cross to bear since he doesn’t get paid big bucks without big fights?

“I take it as both,” he laughs. “They respect me and my abilities, so I take it as a compliment in that way, but at the same time, I want them big paydays and the big names to see who's the best.”

This weekend, Foster, who is ranked in the WBC’s top ten, gets a former title challenger ranked a couple spots above him in Mexico’s Roman, who challenged for the WBC belt in 2018, getting stopped in nine rounds by current champion Miguel Berchelt. And while Foster isn’t the puncher Berchelt is, he is looking to send a message to the champion with his performance in Los Angeles.

“Being that I finally got somebody in the top ten, it definitely makes me want to get up and put on the best show that I ever have,” he said. “Fighting a guy like Roman, he's been in there with Berchelt, so I would definitely want to be able to make it flawless to where it's not even comparable to what Berchelt did to him.”

At the very least, getting in there with a contender who has competed in 75 pro fights can only help his career development. Yes, 75. It’s a number Foster isn’t exactly aiming for by the time he’s done fighting.

If Foster keeps talking with those kids in the gym, he may very well be fighting that long.

“It's a passion that will probably never go away, especially being that when I go talk to the kids, they light up and get so excited,” he said. “It's just something I love doing. They can call me anytime to go work with the kids. I like to help people grow, and it helps me grow at the same time because it makes me want to go harder and turn it up another notch because I've got people looking up to me.”

So what’s it going to look like back in Houston if he shows up to practice with a championship belt one day?

“It's something I've been thinking about since I was a kid, and the road even got tougher, so once I do touch that belt, it's gonna be something that I can't even explain.”

That’s okay. It will be a moment where words aren’t necessary.