During a pre-fight package that aired on ESPN before his bout with Miguel Berchelt, Oscar Valdez was asked what he could do better than his opponent.

“I’ve fought with a broken jaw, a broken rib, but I got back up. Maybe that’s it. Maybe I can send him to the canvas and he won’t get back up,” he said.

One of those things turned out to be true. Valdez’s insinuation was a self-deprecating one-- he might not be better than his opponent in any one category, but on desire and toughness alone he could overcome the odds and upset the heavily-favored WBC super featherweight champion. In practice on Saturday night though, Valdez was a superior boxer, a better defensive fighter, and the harder puncher.

And he did send Berchelt to the canvas, and Berchelt didn’t get back up—for an uncomfortably long time.

Valdez scored what will almost certainly be the Knockout of the Year when the calendar closes, stopping Berchelt in the 10th round to win the WBC’s version of the 130-pound title and become a two-division world champion.

In the final second of the 10th round, Valdez stepped to his right to avoid an overextending Berchelt, angling himself in such a way that his opponent couldn’t adapt and hit him, but that allowed him to load up a perfectly aligned left hook. As it landed, Valdez yelped in triumph, knowing the fight was over before Berchelt had even fallen. Signs of life seemed to leave Berchelt as he slumped to the canvas, slipping through the arms of the referee and landing face first. As ringside physicians turned him onto his back to check his vitals, his eyes remained closed and he was motionless for over a minute until his lips finally started to move.

Valdez’s joy quickly turned to concern. He and Berchelt were not blood rivals, they were actually longtime friends and “basically neighbors” in Hermosillo, Sonora, Mexico. It was likely why Valdez wouldn’t speak to being physically superior to Berchelt when asked before the fight. He liked and cared for his opponent, so he had to find more meta motivations. But he still had to go in and hurt him, ultimately. So when Berchelt finally sat up on a stool, conscious at last, Valdez knelt before him and hugged him. Not the kind of bro hug we’re used to seeing from athletes, which are sweet in their own way, but the kind of embrace you give to your friend, your neighbor, your loved one—one you haven’t seen in a while, or one you thought you might not see again.

The chilling denouement was the fitting ending to what had been in some ways a bittersweet journey to achieving Valdez’s lifelong goal of holding the same green WBC belt his heroes held when he was a child. Much of the marketing of the bout was centered around comparing it to the legendary battles between Erik Morales and Marco Antonio Barrera, the first of which happened the same week 21 years ago. It was also noted that Berchelt was chasing Julio Cesar Chavez’s mark of nine defenses of the super featherweight title. 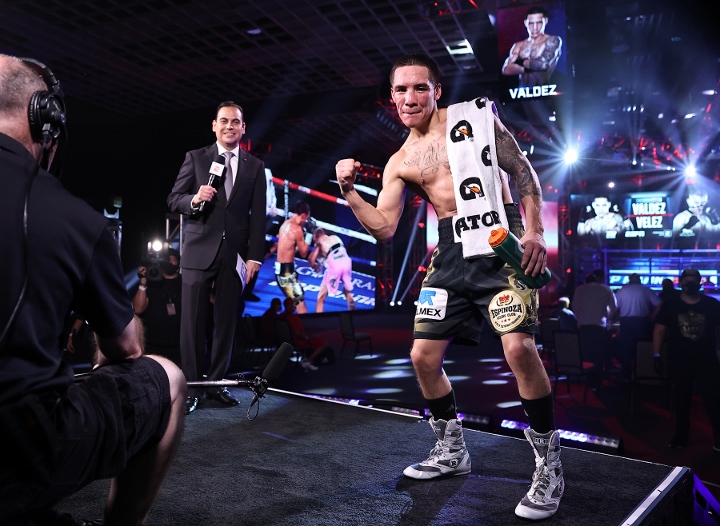 Chavez, Valdez’s hero, said that Berchelt would walk him down and stop him.

“I heard my idol say (Berchelt) was going to walk me down,” said Valdez before the fight, pausing to consider what he wanted to say next, whether he really wanted to frame them as enemies in his story or not. “To my idols that are watching me, I want to get one step closer to them.”

That pent-up energy seemed to carry into the ring. In the early rounds, Valdez operated with a sense of desperation that Berchelt, who was so relaxed about the fight that he reportedly ordered two Hawaiian pizzas the night before, didn’t seem to have. Valdez later said that all of his fast tempo, shifty movement and twitchy feints that, on their surface, made it appear as though he was the one who was fighting wound up were actually meant to entice Berchelt to overcommit. In the early rounds, he had fooled the viewer, the television commentators and his opponent.

“He kept on getting a little more anxious, he was losing control. We wanted to make him make mistakes, make him lose control in the ring and take advantage of it,” Valdez said.

In the fourth round, Valdez badly hurt Berchelt and swatted him around the ring for the better half of the frame, collecting a knockdown in the process after the ropes kept Berchelt upright. The beating continued into the fifth round, prompting referee Russell Mora to tell Berchelt “you’ve got to show me something, brother.” Almost immediately, Berchelt started showing encouraging signs, marching after Valdez while throwing combinations in his signature cadence.

This was precisely what Valdez had prepared for. In speaking with reporters during fight week Valdez remarked that he would “see (Berchelt) all the time and think, I can beat that guy” and that he “didn’t want to be 60, 70, 80 years old regretting that he didn’t fight him in his prime.” Valdez knew that Berchelt’s hallmark was keeping opponents on the very end of his punches, and almost chasing after them as he did it. It’s a tightrope of an offensive strategy that if executed perfectly is tremendous but can quickly turn into overzealousness and recklessness.

By the seventh round, Valdez was once again timing Berchelt perfectly, hammering him with uppercuts and sweeping right hands. Berchelt’s corner sensed the importance of the moment and eschewed any tactical advice, instead going the emotional manipulation route, reminding Berchelt that “we fight for honor.”

Berchelt marched forward bravely in the eighth and ninth, just as he was asked to. But Valdez, who took the opportunity in every interview leading up to the fight to look into the camera and tell the children watching at home to never give up on their dreams, did the opposite to his friend in the ring —he took away all hope.

At the end of the ninth round, Berchelt slumped onto his stool in the corner and microphones captured him uttering “ya valió verga.” Or, in English, “I’m f----d.”

Two minutes and 59 seconds later, he walked into the fateful blow.

Everything Valdez had dreamed of had come true, and everything he predicted came to fruition, but as he sat down with a hot beverage in hand to answer media questions after half an hour in the medical room, there was a solemn tone in his voice. It cracked every once in a while. He was tired, not just physically, but emotionally.

“Right now, it was a long camp. It's been a full year since the pandemic started. A lot of emotions are going through my mind right now. I just want to go back home and hug my family because without them none of this would have been possible. I miss them so much,” said Valdez. “People don't know the hard work we put in the gym, going away from our family, being on strict diets, going against all the odds. I knew it was going to be hard, but it wasn't impossible to accomplish my dream.”