Kovalev’s veteran trainer isn’t as sure his fighter can win a decision over Alvarez in Las Vegas, even if Kovalev deserves one in their 12-round, 175-pound title fight at MGM Grand Garden Arena. As great as Alvarez has become, McGirt and the rest of Kovalev’s handlers are well aware that boxing’s biggest non-heavyweight star has benefited from a few charitable scorecards over the years in “The Fight Capital of the World.”

“This is how I see it – if we beat him and don’t get the decision, the whole world will see it,” McGirt told BoxingScene.com. “And a guy like Canelo is not gonna accept that. He’s gonna want a rematch. You know what I mean? The key is to go out there and do what we have to do, and not worry about the judges, not worry about none of that. Because then that’s how you get caught up and you get yourself beat up, because you’re worrying about too many things.”

Russia’s Kovalev wasn’t worried about judging before his first fight against Andre Ward. The defending WBO light heavyweight champion has spent the past three years, however, reminding anyone who’ll listen that Ward was given “a gift” in the form of a unanimous-decision victory in November 2016 at T-Mobile Arena.

Ward won that bout, 114-113, on all three scorecards. Kovalev knocked down Ward in the second round that night, but a resilient, well-conditioned Ward mounted a comeback throughout the second half of a 12-rounder numerous reporters and fans still believe Kovalev won.

McGirt, a two-division world champion, won’t allow Kovalev (34-3-1, 29 KOs) to become overly concerned with judging before this DAZN main event. He has more than enough to consider while trying to figure out how to beat an elite, younger opponent who clearly picked Kovalev because Alvarez views him as a beatable, vulnerable world champion.

“We’ve gotta worry about what we’ve gotta do to show the world that he’s the better fighter,” Kovalev said. “And if they rob him, the whole world will have seen it. And no true champion is gonna say, ‘I won, but I got my butt kicked.’ No, he’ll say, ‘I’ve gotta come back and redeem myself.’ ”

He has yet to agree to a third fight against Gennadiy Golovkin, either.

They fought to suspect split draw in September 2017, when Adalaide Byrd absurdly scored 10 of the 12 rounds for Alvarez (118-110) at T-Mobile Arena. Almost a year to the night later, Alvarez edged Golovkin by majority decision in a closely contested, 12-round rematch, also at T-Mobile Arena. 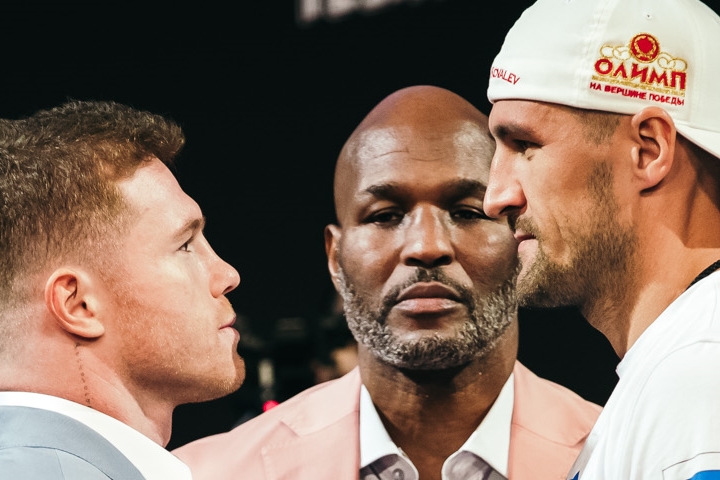 The rematch clause in these contracts only would allow Alvarez, a 4-1 favorite, to exercise it in the event he loses to Kovalev and wants a rematch.

“Yes, I feel there will be something,” Kovalev said when asked about the potential for controversial scoring Saturday night. “[It] could be. I don’t know, because I had already a wrong decision [against Ward]. But right now, I’m not concentrating on this. My job is to show to the people good boxing, a good fight.”

Moretti has judged each of Alvarez’s past four fights in Las Vegas, and eight of Alvarez’s previous nine appearances here. Moretti most recently scored Alvarez a 115-113 victor against Daniel Jacobs in their middleweight championship unification fight May 4 at T-Mobile Arena.

Trella has judged just one Alvarez fight. He had the first Alvarez-Golovkin fight a draw (114-114), whereas Moretti scored that fight for Golovkin, 115-113.

Lederman will judge an Alvarez fight for the first time.

None of the three judges assigned to Alvarez-Kovalev worked the first Ward-Kovalev fight. Moretti had Ward ahead, 67-66, entering the eighth round of their light heavyweight championship rematch, which Ward won by eight-round technical knockout in June 2017 at Mandalay Bay Events Center.

“The panel of judges is fine,” said Kathy Duva, CEO of Main Events, Kovalev’s promoter. “I feel comfortable with at least two of them, maybe all three. Judges are affected by crowds. I think that has a lot to do with it. I know one good thing about the Mexican crowds – if their guy’s losing, they don’t just keep cheering for him. They get quiet. I’m hoping they get quiet.”

Yet even the undefeated five-division champion had to settle for a majority decision that night against Alvarez (52-1-2, 35 KOs). CJ Ross, who scored that obviously one-sided fight a draw (114-114), was never assigned to judge another professional boxing match.

“He’s capable of out-boxing [Alvarez]. He’s going to have to. He’s gonna have to dominate, and he’s gonna have to do it one round at a time, which is how he did it with [Anthony] Yarde. He’s an excellent boxer, and that’s the way to win this fight. Think you can win a decision if you can dominate. Don’t think you can win a close decision. Anybody that comes here thinking they’re gonna win a one-point decision [over Alvarez], you’re out of your mind.”