Junior lightweight world titlist Joseph Diaz Jr. knows he is obligated to give former titlist Tevin Farmer a rematch even though he much prefers a showdown with three-division titlist Abner Mares instead.

In recent weeks, “JoJo” has called out Mares and the two have posted mock posters on social media for a would-be bout that was Diaz’s idea.

“I know Abner Mares, he’s an ex-three-time world champion but he’s a legend, man,” Diaz told BoxingScene..com. “When he’s retired and all this is said and done he’s gonna be a Hall of Famer. So, knowing that he wanted to make a comeback and wanted to fight -- I know he had a problem with his eye but he’s saying he’s 110 percent ready to go again and he wants to fight again -- and I want to give the fight fans the best fights possible.”

Mares believes the fight would be an action-packed affair given their styles.

“I know me and Abner Mares will be a fight that would be a very intriguing fight knowing we’re both Mexican-Americans and also the type of fighters that are willing to go out there and give it our all,” Diaz said. “I know Abner Mares is a helluva fighter and he’s a f------ warrior. He’s an experienced fighter and I’m a person who just won a world title and wants to really make statements in this sport of boxing.

“My time is now, so I wanted to spice things up and I called out Abner Mares because I know that it’s a huge fight that fight fans want to see.”

Of course, before there can be any serious discussion about such a fight, Diaz owes a return match to Farmer, who exercised his contractual right to an immediate rematch with Diaz soon after their fight on Jan. 30 in Miami, where Diaz pulled the upset by winning a unanimous decision via scores of 116-112, 115-113 and 115-113 to take Farmer’s 130-pound world title.

In a recent interview with BoxingScene, Farmer (30-5-1, 6 KOs) said he thought Diaz’s call out of Mares was an attempt for him to sidestep the rematch.

Diaz, whose win over Farmer was his fifth in a row since dropping a decision challenging Gary Russell Jr. for a featherweight world title in 2018, said that is simply not true. Yes, Diaz said he prefers to fight Mares (31-3-1, 15 KOs) next but he understands he owes Farmer a rematch first.

“Tevin Farmer is saying that I’m trying to dodge him or trying to duck the rematch. I’m not even trying to do any of that,” Diaz said. “My thought is I beat him fair and square and I feel like there’s nothing he can do any different that could overcome that. I’m willing to fight him again and I know there is a rematch clause and I know that a fight with me and him is gonna be made again. But it’s gonna be the exact same outcome.

“I feel like Tevin Farmer was the best fighter he was that night. I feel like a lot of people and boxing critics don’t give me the credit that I deserved that night. I took it to him. I started to go to the body right away. I hurt him right away to the body. He was trying to be distant and move around but he wasn’t moving as much because he was hurt with the body shots and then I started landing shots with my left to the temple. Tevin Farmer is a helluva fighter but I just feel like I’m on a whole other level right now and I feel like even if we do a rematch it will be the exact same outcome. He can’t do anything different.”

The 27-year-old Diaz (31-1, 15 KOs), a southpaw from South El Monte, California, who represented the United States in the 2012 Olympics, was able to defeat Farmer despite fighting 10-plus rounds with a horrendous cut over his left eye that was caused by a second-round accidental head butt.

Diaz said the gash required 15 stitches -- nine on the outside and six on the inside – to close. He also said the cut hampered him even though he won the clear decision.

“It was disgusting. It was a really, really bad cut, man,” Diaz said. “When I saw it after the fight I was like, ‘God damn!’ I couldn’t even believe it. It was like surreal. It looked like it was fake. I fought 10 rounds with that f----- up eye, man. I knew that my eye was pretty f----- up so I didn’t want to look at it in the video or anything because I didn’t want to scare myself.”

Diaz said he knew it was bad as soon as it opened but that he was going to do everything within his power to make sure he continued to fight hard and win.

“I was just like, ‘I’m gonna fight through it, stick to the game plan.’ I know what’s at stake,” he said. “I know this is my opportunity of a lifetime so I got to do it. This is my third world title shot so I got to go out there and give it my all no matter what. So I applied the pressure and stuck to the game plan but I wasn’t throwing my left hand as hard anymore. I was throwing it stiff so I could keep him off and whenever he tried to throw a shot – because he was aiming for the eye – I would block it. So, it wouldn’t be as damaging or as effective.

“If he threw more clean shots on my eye the referee probably would have stopped it. I had to make the right adjustments and apply a lot of pressure and take it from the champion, and that’s what I did. The cut was wide open but the blood wasn’t just dripping down (into my eye). I really thank my cut man, Ben Lira, for making that cut not drip because if it was bloody and just dripping out it would have been more traumatic and dramatic where the referee and the doctor would have seen how bad it was and probably stopped it. My cutman did a helluva job.”

Diaz said that had he not suffered the cut he felt like he would have won by knockout.

“Without my cut I would have been able to stop Tevin Farmer,” Diaz said. “I feel like if I didn’t have the cut I wouldn’t have to hold back and I could let loose and just tee off.” 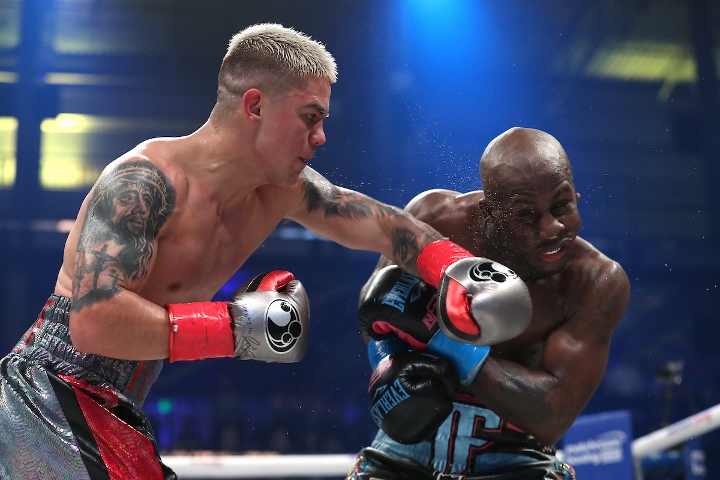 With the cut healed, Diaz was cleared by his doctor to begin training earlier this month. While it remains to be seen exactly when the rematch will happen since nothing has been set yet by broadcaster DAZN, Diaz promoter Golden Boy or Farmer co-promoters Lou DiBella and Eddie Hearn, Diaz said he’s training three or four times per week and will be ready to go whenever he gets the call.

“If Tevin Farmer really wants to this rematch we can fight in July or August or September. Whatever he wants,” Diaz said. “At the end of the day, I know what I’m about and that he’s going to have make serious changes. I’ll be ready for it. I’m ready for him whenever he wants. I know that I have a contract for a second fight with him. I’m not trying to duck him or avoid that. I know that fight is something that has to be made and I’m gonna get the job done.”

And then he wants Mares because he has a big name and a crowd-pleasing style.

“My main focus is to make as much noise as possible to get the public’s attention and to get people’s eyes on me so that way I can build up more hype and get more exposure and build my brand and build my name more, so that’s why I’m calling out Abner Mares,” Diaz said. “He’s a huge name and he’s a helluva fighter, so what more is a world champion like myself to ask for? I feel like anybody in my shoes would do the exact same thing and call out Abner Mares like that.”

Mares, who has won world titles at bantamweight, junior featherweight and featherweight, was scheduled to move up to junior lightweight and challenge Gervonta Davis for his title in February 2019. However, Mares suffered a torn retina in training and was forced to withdraw from the fight. He has not boxed since, but recently announced that he had been cleared to train again and was planning to return. It’s a return Diaz welcomes.

“Growing up, me and Abner didn’t hang out but I sparred Abner a couple of times,” Diaz said. “I used to see him at different boxing events. I know Abner

Mares and he knows me as well. There’s no animosity between us at all. We respect each other and we know that we could deliver a helluva fight for the fans.”

Dan Rafael was ESPN.com's senior boxing writer for fifteen years, and covered the sport for five years at USA Today. He was the 2013 BWAA Nat Fleischer Award winner for excellence in boxing journalism.