He knocked down Harrison twice in the 11th round and stopped his nemesis to regain the WBC 154-pound championship in the main event of FOX’s tripleheader from Toyota Arena. Charlo first floored Harrison in the second round, but Harrison came back to make their fight every bit as competitive as their first fight a year ago.

Harrison got up from both knockdowns during the 11th round. Referee Jack Reiss still stopped their scheduled 12-rounder 2:28 into the 11th round because Charlo landed unanswered punches as Harrison was backed against the ropes.

Charlo, 29, regained the WBC super welterweight title he lost in controversial fashion to Harrison almost exactly a year earlier. He also avenged the only loss of his 12-year professional career.

“I got the belt back and I didn’t leave it up to the judges,” Charlo said. “Tony is a former champion. He had a lot on the line. I dominated and I knocked him out. It let him know that the power was real. 2020 is gonna be real. It’s gonna get loud.”

The 29-year-old Harrison, who fought for the first time since he upset Charlo a year ago, lost by technical knockout for the third time in his career. Harrison had previously been stopped by former IBF/IBO/WBA champ Jarrett Hurd and Willie Nelson, each time in the ninth round.

Charlo made sure the scorecards and punch stats didn’t matter in the 11th round.

A left hook by Charlo hurt Harrison and sent him stumbling backward in the 11th round. A second left hook sent Harrison to the canvas, into Charlo’s corner.

Harrison got up, but Charlo aggressively tried to finish him. He dropped a staggered Harrison again after connecting with a left hook, left uppercut and right hand.

A dazed Harrison reached his feet again and tried to his best to stay away from Charlo for the final minute of the round. Charlo caught up to him, fired several more power shots and Reiss stepped between them to stop the fight.

Harrison expressed disappointment to Reiss, but he would’ve had to survive another 32 seconds against an aggressive, strong Charlo to reach the final round.

“Jack is a championship referee,” Harrison said. “I started getting a little lax and got caught. He earned it. I hate it, but he earned it. The game plan was to do a little boxing. But taking a year off, my body wasn’t used to it. He earned it and no excuses. I got caught slipping. I never trade offense for defense. He caught me in between. I feel like I let us down. I let me down. It’s one-on-one. Back to the drawing board.”

Charlo’s left hook hit Harrison on the side of his head about 15 seconds into the 11th round. Harrison played to the crowd after that punch landed to show that he wasn’t hurt.

A right hand by Harrison with about 40 seconds to go in the 10th round drew a loud response from the crowd.

Harrison worked well off his jab during the ninth round and mostly kept Charlo on his back foot.

An overhand right by Harrison caught Charlo near the midway mark of the eighth round. Another right hand by Harrison landed later in the eighth.

Charlo caught Harrison with a left-right combination about 1:10 into the seventh round. Charlo and Harrison each landed hard shots to the body and head during a completely competitive round.

Harrison had a strong sequence that started with just over a minute to go in the fifth round.

He landed a straight right hand when Charlo was backed into his own corner. He later landed a left uppercut and quickly followed with a right uppercut. 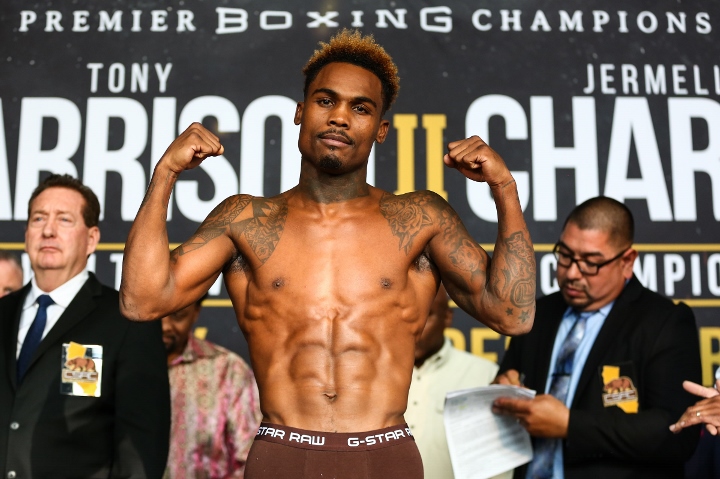 Charlo and Harrison exchanged left hooks a little more than a minute into the fourth round. A left hook by Charlo caught Harrison on the top of his head and stopped him in his tracks with just over a minute to go in the fourth.

Charlo caught Harrison with a left uppercut toward the end of the fourth.

After flooring Harrison late in the second round, Charlo attacked him at the start of the third round. Harrison took those shots, moved the action across the ring, backed Charlo against the ropes and landed several power shots of his own.

Harrison hammered Charlo to his body later in the third with left hooks.

A right by Harrison landed to the side of Charlo’s head barely a minute into the second round. That shot caused Charlo to clinch him.

Moments later, Charlo caught Harrison with a shot that seemed to make Harrison unsteady on his feet. Charlo’s left hook with about 15 seconds to go in the second sent Harrison to the seat of his trunks.

Charlo’s right hand landed on the top of Harrison’s head as he already was falling from the left hook.

Harrison got up quickly and avoided the shots Charlo threw before the round ended.

Harrison landed an overhand right late in the first round, which didn’t affect Charlo. Neither fighter landed an impactful punch in those first three minutes.

Harrison was an 8-1 underdog when he upset Charlo last December 22 at Barclays Center in Brooklyn. He withstood Charlo’s power in that highly competitive contest to win a unanimous decision.

The rematch Harrison was contractually obligated to give Charlo initially was scheduled for June 23 in Las Vegas. It was postponed almost six months because Harrison suffered an ankle injury while training.

Charlo kept busy by knocking out Harrison’s replacement, Mexico’s Jorge Cota, in the third round at Mandalay Bay Events Center. Harrison’s injury kept him out of action for almost exactly one year.

There was a lot of bad blood between Charlo and Harrison during the buildup toward their rematch, particularly at the two press conferences to promote it. After regaining his title, however, Charlo went to Harrison’s corner and expressed respect for the former champion.