Every boxer is confident. If he wasn’t, then he wouldn’t walk up those four steps into the ring. But there are different levels of confidence. On the scale, you could put Floyd Mayweather on the top, home to the loud, boisterous confidence that lets the world know how the former pound-for-pound king feels, whether anyone cares to hear it or not. On the lower end, how about placing Mayweather’s former foe, Manny Pacquiao, there? The Filipino icon knows how good he is, but he isn’t screaming it from the rooftops. His performances should speak loudly enough.

And then there’s Irish middleweight prospect Jason Quigley, who headlines an ESPN show at Fantasy Springs Resort Casino in Indio, California, against Glen Tapia on Thursday. His confidence could sit somewhere in the middle, as he’s not beating his chest and telling the world what he’ll do on fight night, and he’s not sitting by quietly either. But his confidence when it comes to Thursday night and his boxing future may be the most dangerous, because there is no false bravado. He believes everything that comes out of his mouth and he’s more than willing to back it up. That makes the native of Donegal, Ireland a scary man at 160 pounds, and as affable as Quigley is, you probably wouldn’t want to fight him.

He laughs when this is pointed out to him, but when asked where his confidence came from, he doesn’t point to one of his 12 pro wins, taking an amateur title he chased after, or a victory in a California gym war. He goes back to his father, Conor.

“He put the belief and the confidence in me since I was a young kid,” Quigley recalls. “He’s always told me how talented I was and how special I was and how far I could go in my career. And he’s not just told me this because he was my father and my coach. He told me in the times I’ve gotten beaten as an amateur.”

In those times, an inconsolable Quigley would get the words he needed to hear from his dad.

“Don’t worry about it. Okay, you got beat. Learn from it, move on. You’re a better fighter and your time will come. You have to be patient and it will come.”

Quigley has been patient. And when his amateur career turned into a professional one, he stayed the course. Sure, 12 fights isn’t a lifetime in a sport that has no ready blueprint for success, but the 25-year-old has done everything that has been asked of him thus far. So he feels that it’s time for a step-up fight.

“I know I’m ready for these fights,” said Quigley, who is coming off wins over James De La Rosa and Jorge Melendez. “If I wasn’t ready or this wasn’t the right move right now in my career, I wouldn’t be taking it. But this is perfect. What else am I meant to do? This is the next step for me. I’ve got to keep climbing the ladder now. This is what it’s all about. It’s about progressing your career. I don’t want to be out here getting in with guys and taking them out inside a few rounds. I’ve done all that already. Now it’s time to start stepping up the competition and getting excited.” 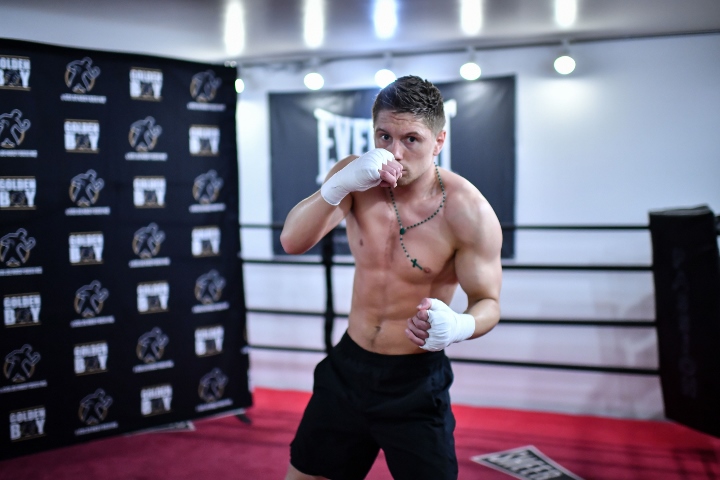 And he’s excited to test himself against Tapia. The New Jersey native is as tough as they come and a former hot prospect himself, but he comes into the fight off back-to-back knockout losses to Michel Soro and David Lemieux. So the 27-year-old is either on the downside of his career or primed to shock the Golden Boy prospect and restart his quest for championship gold. Quigley knows how dangerous a veteran underdog can be, but he’s not about to let him keep him from continuing on his own path.

It’s about this time that the quietly confident Quigley begins breaking down this week’s fight, calmly and with plenty of respect for his opponent.

“I expect the best Glen Tapia of his career on March 23rd,” he said. “Glen Tapia has gone further than I have in my career right now. He’s been in different atmospheres and at a different level than I have been as a professional so far. This is, on paper, a step down for Glen Tapia. He’s coming back in order to fight me for an NABF title to relight his career, and this is his chance to get back in the mix of things again.”

Quigley pauses. His volume level remains the same when he resumes, but the intensity is ramped up.

“Glen Tapia is a wounded animal right now, and they are the most dangerous,” he said. “This is his chance. But he has never faced an animal like me. He has never been in the ring with somebody like me before. I do not care how good of a Glen Tapia comes on March 23rd because nobody’s stopping me. He is just another hurdle, another obstacle on my journey to becoming what I want to become, and that’s world champion. And it’s up to me now on March 23rd to eliminate him, to take him out there and move on with my career. This is about me now. This isn’t about Glen Tapia.”

Is that the scary confidence? Sure sounds like it. Quigley laughs, moving from fight mode to interview mode once more, admitting that “There’s no way of describing” how he feels about his upside in the sport. He just knows he will get to the top, and he’s willing to do what it takes to get there.