by Tamas Pradarics at ringside

In 2013 Grachev won a split decision after a close ten-round affair against previously unbeaten, former two-division world champion and fellow Hungarian Zsolt Erdei in Monte Carlo, Monaco. That was the arguably biggest achievement for the Russian-born Grachev, who lost all his major matchups since.

Szello (20-0, 12 KO), who currently holds the WBO Inter-Continental title at cruiserweight, started well using his jabs, straight rights, and mobility to get the control over his unorthodox brawler foe. The once-dangerous Grachev (16-6-1, 9 KO) tried to land big bombs on his unbeaten opponent but he had a tough time against the Hungarian, who clearly enjoyed an advantage in timing and accuracy.

Referee Bela Florian took a point away from Grachev in round four for headbutts. A nasty cut opened on the left eyebrow of Szello in the same frame from an accidental clash of heads.

The blood clearly bothered Szello who had struggles with Grachev’s unorthodox, butting-and-holding kind of style. The Russian fighter got also cut above his forehead in the second part of the matchup. As the rounds went on, Szello put in well-enough to prove he is the better fighter.

After ten full rounds, two of the judges (Gerhard Sigl and Ferenc Budai) saw it unexpectedly close with 96-93 for the Hungarian fighter while Bence Kovacs scored it 100-89 that showed the actual difference between the fighters’ performances much more realistically.

Balazs Bacskai improved his record to 5-0 with an excited six-round technical knockout victory over Tanzanian Meshack Mwankemwa. The talented middleweight prospect fought much more offensive-minded thanks to a recent change of trainers. Mwankemwa (17-5-2, 10 KO) fought awkwardly and was willing to get involved into exchanges but ultimately found himself on the canvas after the Hungarian switched gears and landed a number of unanswered blows on him in round six.

Referee Bence Kovacs halted the contest without even counting. The 30-year-old Bacskai (5-0, 2 KO) is seemingly on a good path that could lead him to international titles in the future. 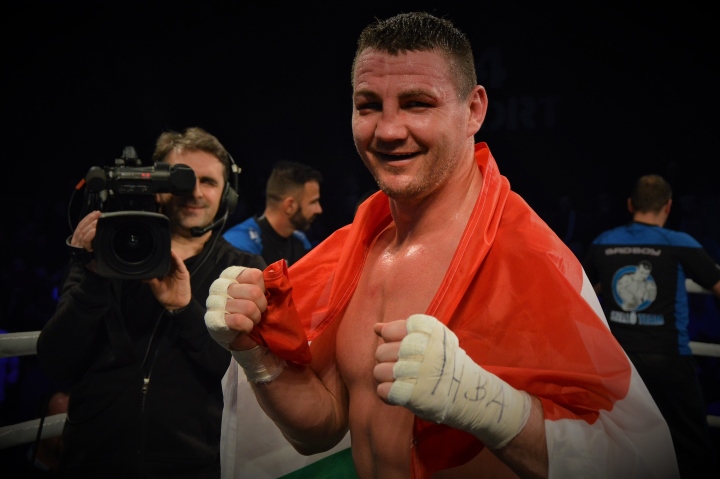 Ferenc Berki Jr captured his first boxing title when he beat Hungarian super welterweight champion Laszlo Fazekas in a ten-round matchup. 22 years old Berki Jr (11-0, 5 KO) took the lead thanks to his physical power, well-timed shots and patience en route to a decision win over his much more experienced countryman. Fazekas (31-30-1, 18 KO) was game but his punches barely bothered Berki even when they found their target.

WBO Youth 168-pound champ Renato Egedi added another belt around his waist in the form of the vacant national title. The Budapest-native Egedi (12-1-2, 6 KO) dropped his novice opponent, Mark Krammerstodter (3-1-1, 2 KO) in round five and his hands were raised minutes later after his beaten foe was unable to come out for the sixth.

WBO No. 5 rated super middleweight contender Shefat Isufi won a shutout over tough Rafael Sosa Pintos in ten frames. Isufi (26-3-2, 20 KO) also knocked his Uruguayan foe down in each of round six, seven, and nine but was unable to close the show. Sosa (56-14, 23 KO) was willing to absorb punishment and kept coming at his more talented opponent until the final bell.

Experienced Gabor Gorbics secured an important, split decision win over hard-hitting Zoltan Kispal in an eight-round super welterweight crossroads bout. Gorbics (24-9, 14 KO), despite being on a disastrous run of 1-6 in his last seven outings, used his roughness to build a lead over explosive but limited Kispal (8-4, 6 KO). After the final bell, judges scored it 79-73, 77-75 for Gorbics while on the third card Kispal won by 77-75.

The sold-out event was promoted by Felix Promotion and was televised live by the national sports broadcaster in Hungary, M4 Sport.