Moscow - If you want to define “toughness” use a suitable synonym like, say, “Ryan Ford”,  who exemplifies this quality at its fullest. Toughness doesn’t necessarily a suitable synonym for “victory”, as the iron-chinned Canadian learnt once again in his career as a gatekeeper.

Ford dropped a majority decision to the WBO #6 super middleweight Aslambek Idigov in what indeed was an even fight, which could have gone either way.

Ford was an epitome of ineffective aggression early on, with Idigov’s lateral movement giving him troubles. But his relentless pressure made up for that during the middle rounds and later on. While Idigov wrenched in some clean singles, Ford didn’t necessarily land clean but he was very punishing even when hitting Idigov’s guard. The latter clinched a lot while on the inside and leaned forward for a cup of wrestling whenever hurt. It was a wrong choice against a much bigger and many times stronger Canadian.

Ford put it all in the latter rounds, and one of the judges saw it a draw 95-95, while the other two got it just narrowly 96-94 - for Idigov (18-0, 7 KOs), who retained his unblemished record and acquired a vacant WBA Asian super middleweight title. Idigov showed guts and some skills but he needs to improve his game in order to be competitive at the highest level. Ford is 17-6, with 12 KOs, and has nothing to be ashamed of, as always.

Terentiev showed great poise early on, connecting with hard jabs, moving smoothly and getting the better of Edisultanov in two-way exchanges. His punches also reddened Islam’s face but when he indeed got cut over his right eye in round three referee Alexander Kalinkin ruled it a foul play by Terentiev and deducted a point from him for that.

Interestingly, the sight of his own blood on his gloves fueled Edisultanov more than his counterpart, and the Chechen fighter started to dominate exchanges, while Terentiev showed signs of fatigue. It got worse in the sixth, when Edisultanov dropped Terentiev with his power punch. Terentiev got up but was more or less outboxed till the final bell despite giving his all.

Former amateur standout, 2016 Rio Olympian and WCB stalwart Adlan Aburashidov (4-0, 3 KOs) made a very quick appearance by annihilating Colombian lightweight journeyman Jose Luis Prieto (27-9, 18 KOs) with a couple of hard left hands at 1:03 of the very first round. He has previously dominated ex-WBA champion Paulus Moses with a unanimous decision. 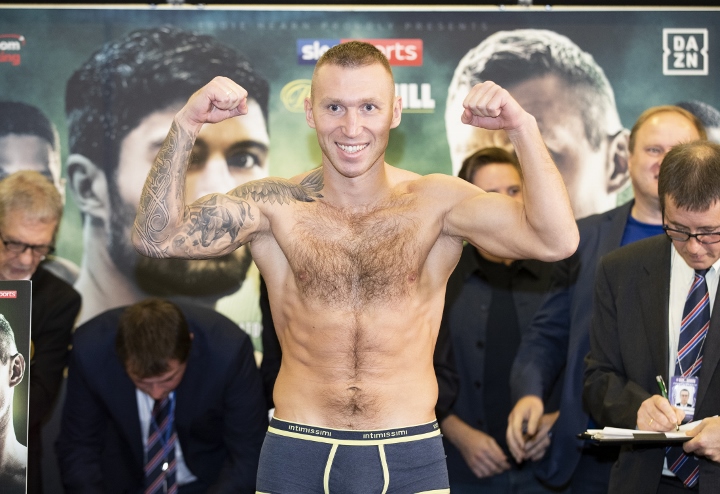 Sirotkin isn’t an extremely watchable fighter who prefers lateral movement over continuous swarming pressure and clinches over close-quarter stand. Luckily, despite a lack of serious power, Ustarkhanov delivered both in a futile effort to overwhelm Sirotkin. It helped him a bit but not so much, as the Russian was elusive and smart enough to clinch as much as he can against the always-willing Chechen stalker.

The crucial moment was in round three, when Sirotkin dropped his foe with an overhand right. Ustarkhanov got bigger at the end but Sirotkin showed all his skills and some roughhouse tactics to keep the Chechen honest.

Former UFC fighter Abdul-Kerim Edilov (2-0, 2 KOs) got his second consecutive first-round stoppage with a frightening kayo of Ghanaian veteran Ibrahim Labaran (15-6, 13 KOs). Labaran was knocked out cold after 58 seconds from the opening bell with a smashing left hook to the chin and was out for several scary minutes before regaining consciousness.

Napari was down right before the end of the first on a short right hand to the whiskers, then was finished off by the same punch at 1:05 of the second round. Davtaev is now 20-0-1, 19 KOs. He has successfully retained his WBC Asian Boxing Council Continental heavyweight title.

21-year old middleweight knockout artist Rizvan Elikhanov improved his record to 10-0, 10 KOs, and acquired a vacant WBO Youth title in a shootout with Ecuadorian import Roger Guerrero (17-2-1, 10 KOs), who was fighting for the first time outside of his native.

Guerrero was light on his feet early on but was immediately put under overwhelming pressure by a younger fighter. Elikhanov dropped Guerrero once in the first right before he bell. The second was more even but in the third Elikhanov increased tempo, dropping Guerrero after a rough close-quarter encounter. It was a flash knockdown but it was soon followed by another one, which wasn’t issued, and finally by a smashing right hand, which put the guest fighter down for the count.

Light heavyweight Movsur Yusupov (15-1, 7 KO) dropped his Colombian opponent Deivis Casseres (24-11, 19 KOs) twice in round two to punctuate his stoppage victory. The last knockdown, which came with a huge liver shot, seemed to land a bit south of the border. Time was 1:22.

Flyweight Mekhdi Abdurashedov knocked out Thai Wichet Sengprakhon (10-7, 5 KOs) with a single right hook in just 36 seconds. Abdurashedov is 7-1, 4 KOs, and back to the winning column after the September loss to Jackson Chauke.

Light middleweight Ramzan Baysarov (10-1, 6 KOs) retained his WBA Asian light middleweight title with an easy annihilation of severely faded former rated lightweight Saddam Kietyongyuth (28-8, 22 KOs). Kietyongyuth was wobbling terribly from the first connected punch by Baysarov but somehow retained an upright stance in the first. However tonnage mattered as the aging Thai was decked twice in the second before referee Sergey Litunov halted the contest at 2:23 of the second, Kietyongyuth being mercilessly punished in the corner.

Super middleweight Idris Shakhmanov (3-0, 1 KO) got his first career stoppage with the second-round TKO of previously undefeated Kazakh import Namik Neftaliev (1 -1, 1 KO). Shakhmanov dropped Neftaliev twice with hard left hooks in the second, and then got the job done with another combo at 1:25 on a three-knockdown rule.

Another super middleweight Shamil Khataev outpunched and outfought lanky debutant Valery Ryabinin with a unanimous decision over six, showing will, stamina but little power to go with. He is now 3-0, 1 KO.