Thomas Williams Jr. was damned because he did, and he would’ve been damned if he didn’t.

He actually would’ve been better off had he been hurt even worse.

Williams was knocked down by a jab in the second round of his fight with light heavyweight prospect Marcus Browne this past Saturday in Cincinnati. He was kneeling, with a glove on the canvas, when Browne followed up with a punch that shouldn’t have been thrown. That hard left hand crashed into the side of Williams’ head. Williams toppled forward.

Had Williams been knocked out or otherwise incapacitated, the fight would’ve been over — with Williams the winner. Under the rules of the Association of Boxing Commissions, Browne only could’ve been disqualified for the blow had it left Williams unable to continue. But Williams took the allotted minutes to recover and opted to go on.

If he’d chosen not to, boxing fans might have criticized him and accused him of trying to find a way out of the fight. He may very well have been out of the fight anyway.

The damage stuck with him. Williams was hurt again later in the second, wobbled once more early in the fourth, sent down by a right hook in that same round, and dropped for the third and final time by another hook in the sixth. Williams had tried to fight back. Many of his punches were wild and winging, falling short as Browne moved away. Others landed well to Browne’s head and body. Browne took them and responded until Williams could no longer respond himself. Williams stayed down for the count after the last knockdown, aware that his jaw was hurt and possibly broken, and that the fight was over.

That was not the way that Williams wanted the fight to go down.

“I need to win against Marcus Browne. Period,” Williams said at one point in an interview weeks before this fight.

“I know that a win over Marcus Browne will put me back to where I need to be,” he said at another point.

“I’ll be in high demand if I blast Marcus,” he said.

“I’m ready to get back and beat Marcus and show everyone that I’m one of the top light heavyweights and not to be taken lightly.” 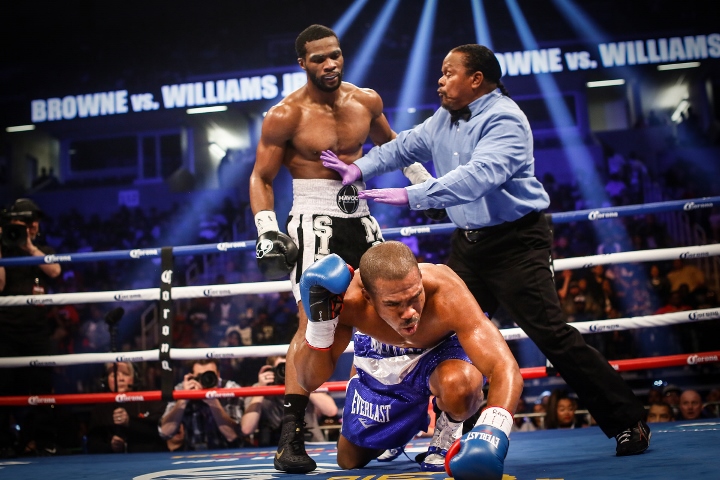 He didn’t hold Browne in high regard. Williams had known Browne since they were both competing in the amateurs. He hadn’t been impressed with Browne in the pros, though. He thought Browne deserved to have lost at least two fights, particularly an egregious robbery on the scorecards last year, when Browne somehow got the nod against Radivoje Kalajdzic.

“Anyone who watched that fight know he lost,” Williams had said. “I don’t know what else to say. He got outpunched. He got out-dogged. He just got outed.”

Williams had himself once been a 175-pound prospect who had given people plenty of reasons to doubt him. He’d fallen apart against former titleholder Gabriel Campillo in 2014, unraveling after a cut opened a cut over his left eye, putting forth no argument when the ringside physician stopped the fight after five rounds. He’d had to rebuild since then, outpointing journeyman Michael Gbenga, trading knockdowns in a second-round stoppage of Umberto Savigne, and then exchanging haymakers for another second-round technical knockout, this one over Edwin Rodriguez.

That put Williams in line for a fight with light heavyweight champion Adonis Stevenson. It wasn’t that Williams was seen as great enough to beat Stevenson, but rather that he was fun enough to watch, someone who was willing to go down firing.

That’s precisely what happened against Stevenson. Williams came off the canvas in the first round, gave the champ some difficulty and then was dispatched in the fourth.

That had helped his career, yet a second straight defeat would hurt him.

That’s not what Williams expected would happen.

“With someone with the same skillsets as Marcus or a little bit more, he always gets rattled,” Williams said. “If you don’t have any break in you, you pretty much can rattle Marcus’ cage. When you rattle his cage, his game plan goes out the window. He goes into survival mode.”

Instead, it was Williams being forced to fight to survive. He already had a bad habit of eating punches even when at his best. It didn’t take a fighter on the level of Stevenson to be able wobble and drop Williams.

It also didn’t help him to be fighting through the aftermath of the illegal blow. The cause and effect are clear and persuasive.

The foul will give Williams an out, a good reason to convince himself that he can come back and do better, that he can still perform well against other notable light heavyweights.

That may be true. But the foul isn’t the only blow that landed. Williams still absorbed heavy shots once again. This loss still matters.

The good news is the circumstances of this defeat will help him get another opportunity. But he’ll have to once again take short money.

He’ll either have to earn his way back into contention, or he’ll learn that he can no longer contend anymore.

It’s either a hard road back or the hard way out.