The hard-hitting WBC heavyweight champion obliterated Breazeale by blasting him with a crushing right hand that knocked him out in the first round at Barclays Center in Brooklyn. Wilder’s pulverizing punch to the side of Breazeale’s head left the challenger flat on his back and quickly brought the crowd of 13,181 to its feet.

Breazeale tried to get up, but referee Harvey Dock waved an end to their scheduled 12-round bout when a wobbled Breazeale reached his feet.  Dock stopped their “Showtime Championship Boxing” main event at 2:17 of the first round.

“Everything just came out of me tonight, you know?,” Wilder told Showtime’s Jim Gray in the ring. “I know there’s been a big buildup to this fight and there was a lot of animosity, a lot of chaos, a lot of hatred against each other. It was a lot of words that was said, and it just came out tonight.”

The 6-feet-7, 223¼-pound Wilder drilled the 6-feet-7, 255¼-pound Breazeale with a right hand that hurt him with about 1:40 to go in the first round. Breazeale backed into a neutral corner, but he tried to fight out of that trouble by firing hard shots back at Wilder.

Eventually, though, Wilder was able to perfectly time a devastating right hand that knocked Breazeale senseless.

His senstational win was reminiscent of Wilder’s three-knockdown, first-round demolition of Bermane Stiverne in their November 2017 rematch at Barclays Center. Like Stiverne, Breazeale (20-2, 18 KOs), of Eastvale, California, was the mandatory challenger for Wilder’s title.

Wilder (41-0-1, 40 KOs), of Tuscaloosa, Alabama, entered their fight as an 8-1 favorite. He caused controversy earlier this week, when he said Breazeale’s life literally was on the line and that he wants to “put a body” on his record. 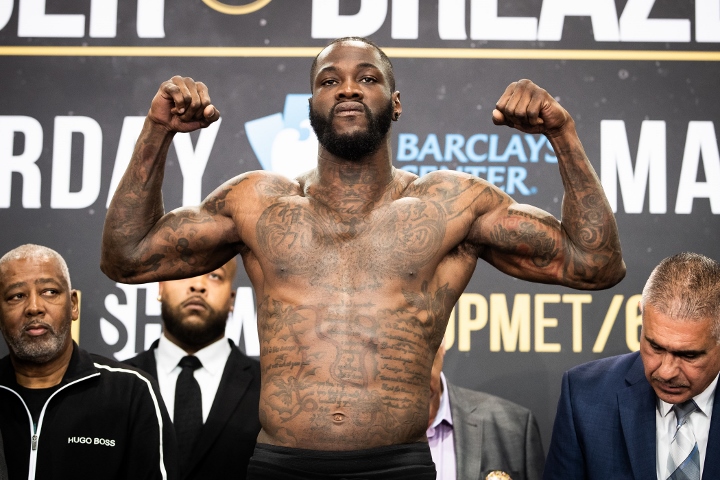 After scoring that spectacular knockout, though, Wilder and Breazeale embraced more than once before Breazeale left the ring.

“I just told Breazeale, I told him I love him,” Wilder said. “And, of course, I wanna see him go home to his family. I know we say some things we mean sometimes, but then when you get into a fight and settle your differences as men and you hold these gloves up, these fists, that’s what this sport is all about. And you can come to the next man and hug him and kiss him and say, ‘Thank you so much,’ you know, instead of other things. I wish the world was like that, where we can handle this with our hands and at the end of the day, we can hug each other and say, ‘You know what? We live to see another day.’ This is what it’s all about.”

Nevertheless, his highlight-reel knockout enabled Wilder to settle a personal score with Breazeale that began in February 2017 in the lobby of a Birmingham hotel. They got into a fight the night they scored respective TKO victories over Gerald Washington and Izu Ugonoh at nearby Legacy Arena.

The challenger spoke earlier this week about pulling off an upset and sending Wilder into retirement, but he offered no excuses Saturday night.

“I think the ref stopped it a little early because I could hear him saying seven and eight, but that’s boxing,” Breazeale said. “He did his job and kept us safe for our next fight. … This was a situation where he landed the big right hand before I did. I thought I was gonna come on in the later rounds. I’ll be back and go for the heavyweight title again.”

Wilder, 33, defended his WBC title for the ninth time since out-pointing Stiverne to win it in January 2015 at MGM Grand Garden Arena in Las Vegas.

This fight against a slower, plodding opponent unfolded far differently than Wilder’s 12-round split draw with Tyson Fury on December 2 at Staples Center in Los Angeles. Wilder floored Fury once apiece in the ninth and 12th rounds of that Showtime Pay-Per-View main event, but only one judge scored the fight for the 2008 Olympic bronze medalist (115-111, 112-114, 113-113).

Wilder had hoped to fight Fury again Saturday night, but Fury opted against signing a contract for that fight in favor of a multi-fight contract with Bob Arum’s Top Rank Inc. England’s Fury (27-0-1, 19 KOs) will make his Top Rank debut June 15 against Germany’s Tom Schwarz (24-0, 16 KOs), a fight ESPN+ will stream from MGM Grand Garden Arena.

Breazeale, 33, lost by knockout for the second time in his six-year pro career.

The 2012 U.S. Olympian and former college football quarterback suffered his first defeat to IBF/IBO/WBA/WBO champ Anthony Joshua (22-0, 21 KOs). England’s Joshua dropped Breazeale twice and stopped him in the seventh round of their June 2016 bout at O2 Arena in London.

The Cuban-born southpaw suffered his only loss to Wilder 14 months ago at Barclays Center. Miami’s Ortiz (31-1, 26 KOs, 2 NC) hurt Wilder during the seventh round of that bout, but Wilder came back to drop Ortiz twice during the 10th round.

Wilder, who had already floored Ortiz in the fifth round, won by 10th-round TKO.