Brian Castano couldn’t believe what he was watching.

Two months after the WBA stripped him of its world 154-pound championship, there was Erislandy Lara, the former champion Castano is certain he beat in his previous bout, boxing an obviously overmatched Ramon Alvarez for what Castano considered his title.

Just a few months earlier, Castano thought he and Lara were headed for an immediate rematch of a 12-rounder that resulted in a split draw in March 2019 at Barclays Center in Brooklyn. Representatives for Michel Soro, the mandatory challenger for Castano’s title, had agreed to allow a Castano-Lara rematch, as long as Soro was guaranteed his shot at the winner next.

Argentina’s Castano wasn’t exactly eager to travel to France for a second time to fight Soro again. He beat Soro by split decision in a 12-round fight in July 2017 in Evian-les-Bains, France, but it took Soro’s promoter 10 months to pay Castano’s purse in installments.

Nevertheless, as long as the enticing, lucrative Lara rematch came first, Castano agreed to face Soro in France again if he retained his title in his second fight with Lara.

Soro’s handlers changed their minds, however, which led to the WBA stripping Castano of its secondary super welterweight title (Julian Williams was the WBA’s “super” 154-pound champ at that time). Strangely, Soro still hasn’t fought for the title Lara easily won versus Alvarez, who was knocked out in the second round of their August 2019 bout.

“That was hard for all of us, especially when we saw Lara fighting the brother of Canelo Alvarez,” Sebastian Contursi, Castano’s longtime manager, told BoxingScene.com. “That was a joke. I was with Brian, watching that fight. I couldn’t explain it to him. I could see in his eyes he was so disappointed. Because if it would’ve been Soro fighting for the title, that would’ve been fair. But then, something happened, and it ended up being Lara against Canelo’s brother. That was a joke.

“I can’t describe that moment. I’ll never forget that. We were in front of the TV and it was so frustrating for him. He was saying, ‘I worked so hard all my life to be a world champion. And they stripped me because they were forcing me to go to France again with those crooks, who don’t even pay you.’ ” 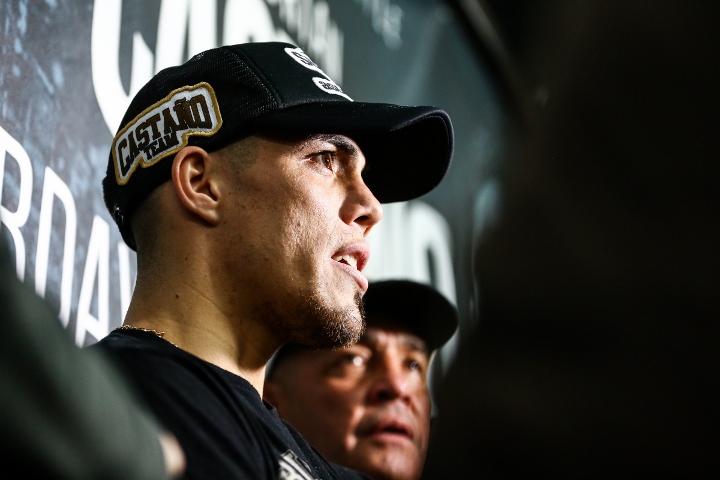 The 31-year-old Castano has fought just once since his draw Lara nearly two years ago, in part due to the COVID-19 pandemic. The undefeated contender will finally get his opportunity to become a two-time champion February 13, when Castano will battle Brazil’s Patrick Teixeira for the WBO junior middleweight title.

Castano (16-0-1, 12 KOs), the mandatory challenger for Teixeira’s title, was supposed to get this championship chance April 25. That card was postponed due to the coronavirus crisis.

An ecstatic Castano came back to the Los Angeles area to train in mid-September, thinking that he’d fight Teixeira (31-1, 22 KOs) either late in November or in December. Five months later, an appreciative Castano cannot wait to capitalize on his second chance.

“This is my opportunity to become a world champion for a second time,” Castano said. “I know how important it is for my family, for my fiancée, for my team, for Argentina and for me.”

Castano can get back in position for the higher-profile fight he wants most, a shot at IBF/IBO/WBA/WBC champ Jermell Charlo, if he defeats Teixeira. A six-round sparring session at Top Rank’s gym in Las Vegas in 2017 taught Castano that Teixeira won’t be easy to beat, even though Castano is a 4-1 favorite.

“He’s a good, good fighter,” Castano said. “He moves good. He’s strong. He boxes well from the intermediate and the long distances. But I am a strong guy. My pressure and my combinations will make the difference.”

DAZN will stream Teixeira-Castano as the co-feature of a card from Fantasy Springs Resort Casino in Indio, California. Joseph Diaz Jr. (31-1, 15 KOs), of Downey, California, will defend his IBF junior lightweight title in the 12-round main event versus another mandatory challenger, Tajikistan’s Shavkatdzhon Rakhimov (15-0, 12 KOs).

Challenging Charlo clearly would be the biggest fight for Castano if he wins the WBO 154-pound crown from Teixeira a week from Saturday night. Castano admits, though, that he still wants that rematch with the 37-year-old Lara (27-3-3, 15 KOs).

“I would’ve fought Lara again the next day or the next week,” Castano said. “That’s what I always wanted, the rematch. I think the fact that he survived that fight with a draw, they somehow rewarded him and he took another path against lesser opponents. I don’t think he wanted to fight me in a rematch.”

Castano instead defeated an injured Wale Omotoso by technical knockout in November 2019, which remains his only appearance since settling for a draw with Lara. Nigeria’s Omotoso (28-5, 22 KOs, 1 NC) injured his left shoulder and couldn’t continue after the fifth round against Castano.

His exasperating experience with Lara convinced Castano to be more aggressive, particularly in enemy territory. Castano will challenge Teixeira on a card put together by Golden Boy Promotions, which represents Teixeira.

“Every fight for me, I feel like I am the visitor,” Teixeira said. “I feel like the underdog, in promotional terms. In these big fights, I have to go for the knockout. I don’t work to knock out my opponents, but at the same time, I know I have to get clear victories.”

A clear victory over Teixeira would place Castano in perfect position to face Charlo (34-1, 18 KOs) for full supremacy in the 154-pound division. It also might make all the aggravation Castano and his team have endured since he fought Lara seem somewhat worthwhile.

“It would mean the world to us,” Contursi said. “I think it would right a wrong, and that doesn’t have anything to do with Teixeira. He’s a fighter; he fights. But the external issues, those were very unfair to Brian. He didn’t deserve that. It’ll be very, very, very well-deserved when he beats Teixeira and becomes champion again. But obviously, it’s not an easy fight, like some people might think.”