Alexander Povetkin was down twice, battered and all but out.

Dillian Whyte was on the verge of finishing the Russian contender entering the fifth round August 22. The heavy-handed contender sent Povetkin to one knee with a left hook 28 seconds into the fourth round and again with 20 seconds to go in the fourth, the second time thanks to a left uppercut.

Then, seemingly out of nowhere, Povetkin viciously unloaded his own left uppercut that changed the hierarchy of the heavyweight division.

Povetkin’s devastating punch caught his unsuspecting opponent after Whyte missed a right hand and knocked Whyte cold. An unconscious Whyte went down hard just 28 seconds into the fifth round, flat on his back and beneath the bottom rope, which forced referee Mark Lyson to immediately wave an end to their scheduled 12-round fight for the WBC interim heavyweight title at Matchroom Boxing’s headquarters in Brentwood, England.

London’s Whyte viewed Povetkin, then 40, as a credible but beatable opponent as the native Jamaican attempted to remain busy while awaiting a WBC title shot that he now may never receive. A little less than two years after Anthony Joshua knocked him out at Wembley Stadium, Povetkin proved he still has championship-caliber boxing inside him and produced BoxingScene.com’s 2020 “Knockout of the Year.”

“Obviously, he’s a very dangerous guy, you know,” Whyte told Sky Sports’ Adam Smith the day after his knockout defeat. “I was boxing the fight, I was winning the fight, and I just got caught. It’s one of those things in heavyweight boxing. It’s not like I got beat up round after round. I just got clocked. That’s all. He dipped low, I shoot the hook, he came with the uppercut. You know, and that was it. But it’s all good. The main thing is we got a rematch.” 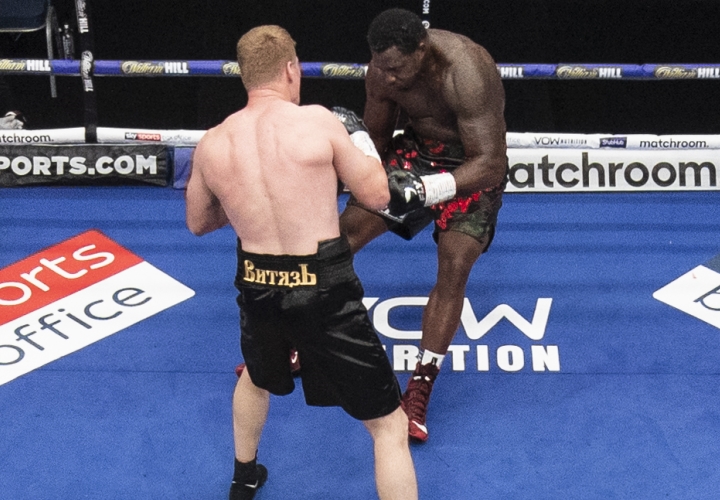 The 32-year-old Whyte (27-2, 18 KOs), whose only previous loss came against Joshua, commendably pushed to have the rematch he is contractually owed scheduled as soon as possible.

They were supposed to fight again November 21, but the 41-year-old Povetkin contracted COVID-19 and the former WBA champion was hospitalized early in November. Their 12-round rematch was tentatively rescheduled for January 30, but it was pushed back again to accommodate a recovering Povetkin (36-2-1, 25 KOs).

Promoter Eddie Hearn has said that their immediate rematch could be reset for March 6, though that could depend upon when sporting events can take place with fans in the United Kingdom.

The runners-up for BoxingScene.com’s 2020 “Knockout of the Year” award are listed below, in chronological order.

Ryan Garcia-Francisco Fonseca (DAZN): In the bout before Garcia (21-0, 18 KOs) solidified himself as an elite lightweight by knocking out Luke Campbell, his sudden, lethal left hook knocked Fonseca unconscious in the first round February 14.

That stunning shot sent Costa Rica’s Fonseca (27-3-2, 21 KOs) down, flat on his back, just 1:16 into their scheduled 12-round fight at Honda Center in Anaheim, California. That was Garcia’s second straight first-round knockout and moved the Victorville, California, native into position to battle Campbell for the WBC interim 135-pound championship he won Saturday night at American Airlines Center in Dallas.

Joe George-Marcos Escudero (Showtime): Houston’s George trailed on two of three scorecards entering the ninth round of their 10-round rematch August 1.

In need of a knockout, George got it when his swift, left uppercut caught an exposed Escudero in an exchange. Argentina’s Escudero landed flat on his back and couldn’t come close to getting up before referee Dan Schiavone counted to 10 at Mohegan Sun Arena in Uncasville, Connecticut.

George (11-0, 7 KOs) had defeated Escudero (10-2, 9 KOs) by split decision in their 10-rounder eight months earlier. There was no doubt about the outcome of this super middleweight match, though.

Jose Zepeda-Ivan Baranchyk (ESPN+): The eighth and final knockdown of their epically entertaining battle left Baranchyk out cold, with his right leg bent awkwardly underneath him.

Zepeda’s left hand brought a fitting ending to the consensus “Fight of the Year” in the fifth round October 3 at MGM Grand Conference Center in Las Vegas. Russia’s Baranchyk (20-2, 13 KOs), who had dropped Zepeda four times, was knocked down for the fourth time himself with 15 seconds to go in the fifth round.

Zepeda (33-2, 26 KOs, 2 NC), a southpaw from La Puente, California, was knocked down by Baranchyk’s right hand just 24 seconds before Zepeda knocked his opponent unconscious. The left-handed Zepeda previously was floored twice in the first round and once in the second round.

Gervonta Davis-Leo Santa Cruz (Showtime PPV): Santa Cruz was competitive for five-plus rounds with the heavily favored Davis, but the four-division champion paid a painful price for trading with the left-handed knockout artist.

Santa Cruz, who was backed near a corner and attempting to fend off an aggressive Davis, was left vulnerable after missing a right hand. Davis (24-0, 23 KOs) very quickly countered him with a crushing left uppercut that short-circuited Santa Cruz (37-2-1, 19 KOs).

Davis’ punishing punch knocked Santa Cruz cold with 23 seconds remaining in the sixth round of their WBA 130-pound title fight October 31 at Alamodome in San Antonio. Referee Rafael Ramos immediately waved an end to their 12-round fight, as Santa Cruz crashed to the canvas, with his right leg bent behind him.

Anthony Joshua-Kubrat Pulev (DAZN): It seemed a matter of when, not if, Joshua would knock out the 39-year-old Pulev from the time their IBF-mandated match was scheduled.

The IBF/IBO/WBA/WBO heavyweight champion still stopped the Bulgarian veteran in style December 12 at Wembley Arena in London. After scoring three knockdowns, two in the third round and another earlier in the ninth, England’s Joshua (24-1, 22 KOs) got great extension on a ravaging right hand that dumped Pulev flat on his back with 14 seconds remaining in the ninth.