Miguel Berchelt beat up Miguel “Mickey” Roman for as long as referee Jon Schorle would allow it Saturday night.

Schorle finally stopped their 12-round, 130-pound title fight with two seconds remaining in the ninth round. By then, Mexico’s Berchelt had knocked down Roman three times, twice in the sixth round and once in the ninth.

Mexico’s Roman showed incredible resolve by getting off the canvas three times and continually coming forward. But Berchelt was just too big, too strong and too good for the courageous contender in the main event of a seven-fight card at Don Haskins Center in El Paso, Texas.

“I wanna thank Mickey Roman for being such a tough warrior,” Berchelt told ESPN’s Bernardo Osuna following his win. “This was, in effect, the toughest of my four world title defenses. … So first off, I wanna give my respect to Miguel ‘Mickey’ Roman.”

Berchelt and Roman talked trash throughout the buildup toward their fight, which took place right across the United States-Mexican border from Roman’s hometown of Cuidad Juarez. It was a competitive contest for the first couple rounds, but Berchelt hurt Roman badly during the third round and mostly remained in control until their fight was stopped.

With Roman ready to go, Berchelt dropped him for the third time with 1:16 to go in the ninth round. A hard right hand to the body hurt Roman, who eventually went down once Berchelt landed a left to his head. 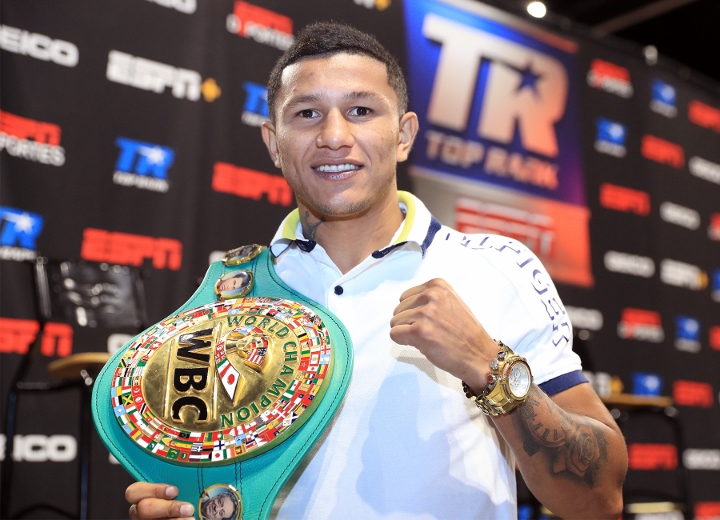 Berchelt beat up Roman during the entire eighth round, but Roman wouldn’t go down. The game challenger even waved Berchelt forward as Berchelt blasted him with one power shot after another.

After getting knocked down twice during the sixth round, Roman moved around and survived as best he could throughout the seventh round. Berchelt landed several hard shots toward the end of the round.

An overhand right by Berchelt dropped Roman with 28 seconds remaining in the sixth. Flat on his back, Roman managed to get up by the time Schorle’s count reached six.

Several seconds later, another right by Berchelt floored Roman again. The challenger got off his gloves and knees a little more slowly this time, but still reached his feet and survived to the end of the sixth round.

“The key to the victory tonight was the work to the body,” Berchelt said. “In round six, I punished him. I pounded shots to the body and to the head, and this man kept getting up. I’ve got to give him all the respect as a valiant Mexican warrior because he gave me a war. And I repeat, this is the toughest of my four world title defenses.”

Berchelt’s right hand to the body knocked Roman off balance with about 25 seconds to go in the fifth round. About 25 seconds earlier, Berchelt landed a right-left combination as Roman moved forward, with his hands down.

Berchelt blasted Roman with a right hand that wobbled him with 1:05 to go in the third round. Instead of holding, Roman tried to fight his way out of that trouble.

Roman’s recklessness led to Berchelt hitting him with a left hook that also hurt him. Later in the third round, Roman held Berchelt tight until Schorle forcefully separated them.

At the start of the second round, Roman bullied Berchelt into the ropes and landed to his body. Berchelt fended him off and landed a hard left hook up to Roman’s head that got his attention.

Schorle called for a break in the action with 1:28 to go in the second round because Roman’s mouthpiece fell out. About 15 seconds later, Schorle warned pushing down Berchelt.

Roman’s right hand that connected with just under 40 seconds left in the first round was the best shot either fighter landed in the first three minutes of their fight.